Jake Matijevic, a mathematician-turned-rover-engineer who played an important role in the design of the Mars Science Laboratory (MSL, dubbed "Curiosity"), now appears in Wikipedia as "Jake Matijevic (rock)." Jake passed away just days after Curiosity's landing in August. With his understated manner, I can imagine his small smile on seeing he's now more famous as a rock on Mars than as an engineer. Who was Jake and what's so important about this rock that he would be honored in this way?

Jake Matijevic (1947-2012) was the surface operations systems chief engineer for MSL, which means he oversaw all aspects of how Curiosity will be kept alive by the engineers and used to best advantage to carry out the scientist' two-year exploration of Gale crater and its 3.4 miles (5.5 km) high central mound. Jake was also a lead engineer for the previous Mars rovers -- the tiny experimental Sojourner (1997) and the scientists' durable surrogates in conducting the first overland expedition on another planet, the Mars Exploration rovers, Spirit (2004-2010) and Opportunity (operating even today in Endeavour crater).

Jake Matijevic was one of the two engineers I interviewed in studying how it was possible for scientists to conduct field science remotely through a robotic laboratory. Prompted by a suggestion from Steve Squyres, the science principal investigator for MER, Jake helped me understand the engineers' perspective and their contributions.

We met in Jake's office at the Jet Propulsion Laboratory in Pasadena, CA, in December 2007. He graciously told the story of how the engineers' thinking has evolved from operating spacecraft like Voyager that fly by a planet or orbit like Cassini around Saturn. Operating a vehicle on the surface is different because you can't simply write a program months in advance that points instruments and takes photographs or measurements. This realization developed while operating the Viking landers (1976-1980), a pair of stationary laboratories -- the scientists could see things they wanted to investigate that were unreachable by Viking's instruments and shovel. Could you put a moving platform on the surface of Mars?

By the late 1990s robotic engineering -- a combination of computer programming, power system, instrument miniaturization, and mechanical-electronic control for mobility -- made possible the Sojourner experiment, basically a robotic solar panel on wheels carrying cameras and an atomic-spectral analyzer. The mother ship, Pathfinder, also provided a proof-of-concept for the airbag packaging with a bouncing ball landing used by MER. Equally important, the engineering team led by Matijevic and Andy Mishkin figured out how a team with a coordinated work schedule and computer visualization and programming tools could operate the Sojourner rover every day.

"Daily commanding" involves receiving data from Mars, processing and interpreting it, deciding what to do next, and then writing and testing a program for the next day's operation, which is transmitted when the rover wakes up the next morning on Mars. Daily commanding is a huge improvement over Viking, where more primitive tools required about two weeks for a plan to be converted to a program. In effect, Viking operations simply focused on gathering all the data that the instruments allowed. Exploring with a roving laboratory is far more demanding, requiring feedback from prior analyses and movements; for example, you can't know what interesting and possible to do next without detailed photographs about what's in your vicinity. Placing an arm with instruments against a rock or soil patch requires knowing how the rover is oriented, so the cameras and other instruments can be placed precisely on the features of interest.

In other missions [the operations plan] becomes part of the initial design and once the instruments and the vehicle are deployed, either as an orbiter or flyby, you're actually clocking through the mission at that stage. The things that you do with the spacecraft are well understood, even at the various design review stages, many years before the mission, before the instrument is ever deployed. In a rover mission...you're plopped down in an environment about which you have little if any information, and given the charter to go forward, do the exploration, find the opportunities to use your instruments. That requires a real understanding both of the engineers of the scientists and the scientists of the engineering: What are the capabilities and what is possible to be done?

As Chief Engineer for MER, a mission that extended Sojourner's stay from months to years and its under 50 ft (10 m) range to more than 20 miles (34 km), Matijevic and the experienced Sojourner team greatly elaborated how we operate a rover on the surface of Mars. They created a joint science-engineering planning process involving more complex and coordinated instruments (e.g., relating photographs to spectral analyses showing atomic and chemical composition) and planned and conducted "campaigns," treks and investigations of craters lasting a year or more. These methods, combined with techniques developed on the Phoenix mission (2008) for synchronizing daily operations with transmission of data and commands relayed by satellites orbiting Mars, are used to operate Curiosity today.

When asked to complete the sentence "Working with a rover ...," Matijevic emphasized how an engineer's imagination confronts reality:

Oh, it's just humbling. I don't care what you think you believe you understand about moving a vehicle, it's never like that. As soon as you're on a different terrain, it's a different regime. I think I've learned as much from driving a vehicle into the sandbox [at JPL], and learning about what's possible to do, what can't be done. (laughs) It's not like driving your car.

In just our short time together, I saw Jake was a humble man, and I later understood well why his passing was felt deeply by all who learned and were guided by him in these pioneering years of working on Mars.

So what's special about "Jake Matijevic," the eponymous rock on Mars? It's likely basalt, originating in volcanic processes. The Curiosity team chose the rock as a suitable target for the first use of the rover's instruments that contact rocks and soil -- a camera called Mars Hand Lens Imager (MAHLI) that can take close-up, color images and a tool called Alpha Particle X-Ray Spectrometer (APXS) for determining what atomic elements are present. About the size of a football with flat, pyramidal sides, the rock offered a convenient opportunity to conduct the first tests for placing the 7-foot-long (2.1 meters) arm and instruments in a precise way. The mast-mounted Chemistry and Camera Instrument was also programmed to zap its laser-camera on the same spot to read chemical composition from vaporized bits. Comparing the results with APXS should help cross-calibrate the two instruments. This is the first "contact science" in the MSL mission, and Jake would have been pleased to see everything worked well. 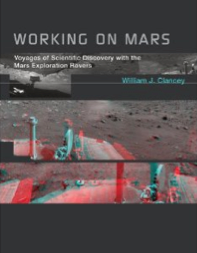