The rocks on Mars have become something of a Rorschach test: Those who believe the planet once held some form of life see signs of it everywhere; others, not so much.

The image below either shows a humanoid skull partially buried in the sands of Mars... or just another rock. 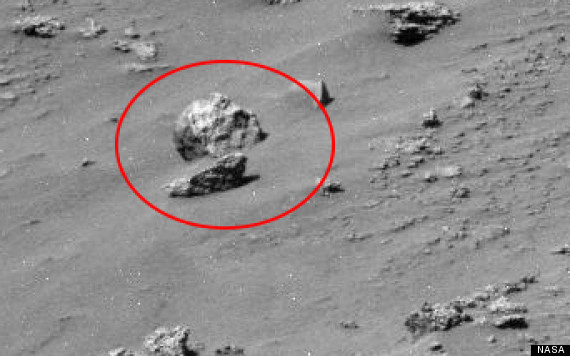 Although the photo was taken several years ago by the panoramic camera on the Spirit rover, the Paranormal Crucible website recently posted a video of the image on YouTube with digital alterations to make it look even more like a skull.

The photo above, however, is part of the original image from NASA (with a circle added by The Huffington Post).

UFO Sightings Daily claims there's an 80 percent chance it's a real skull, and says it is about 15 to 20 percent longer than a normal human skull, making the being about 9 or 10 feet tall. The website also posted digitally-altered images to draw attention to the supposed eye sockets and nostrils.

"This obviously confirms that giant humanoid beings, once roamed the Martian landscape," the website notes.

NASA lost communication with Spirit in March 2010 after more than six years of operating on the planet.