Curiosity snapped 41 images of the Mars moons in the night sky on Aug. 1, with rover scientists then stitching them together to make the final 30-second video. It is the first time a view of the two Martian satellites — called Phobos and Deimos — eclipsing each other has been captured from the vantage point of the planet's surface, NASA officials said.

The new Curiosity video has plenty of scientific value in addition to its gee-whiz appeal, officials said. For example, researchers are studying the images to refine their knowledge of the orbits of Phobos and Deimos, both of which appear to be captured asteroids. [Watch Curiosity's video of the Martian moon eclipse]

"The ultimate goal is to improve orbit knowledge enough that we can improve the measurement of the tides Phobos raises on the Martian solid surface, giving knowledge of the Martian interior," Mark Lemmon of Texas A&M University said in a statement.

"We may also get data good enough to detect density variations within Phobos and to determine if Deimos' orbit is systematically changing," added Lemmon, who is a co-investigator for Curiosity's Mastcam instrument, which took the pictures using its telephoto lens.

Phobos' orbit is taking it closer to the surface of Mars very slowly, researchers said, while Deimos may gradually be getting farther and farther away from the planet. 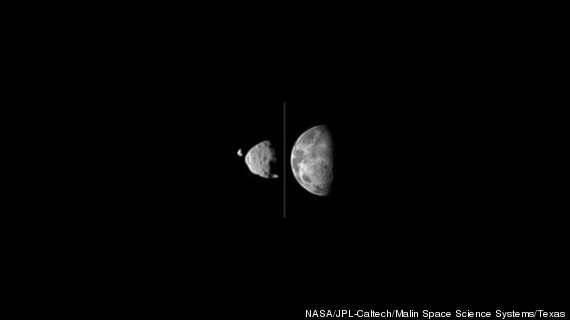 This illustration provides a comparison for how big the moons of Mars appear to be, as seen from the surface of Mars, in relation to the size that Earth's moon appears to be when seen from the surface of Earth. Deimos, at far left, and Phobos, beside it, are shown together as they actually were photographed by the Mast Camera (Mastcam) NASA's Mars rover Curiosity on Aug. 1, 2013.

Earth's moon is gigantic compared to Phobos and Deimos, with a diameter of about 2,160 miles (3,475 km). But our planet's natural satellite orbits much farther away — its average distance is 239,000 miles (384,600 km) — so Phobos appears half as big in the sky to Curiosity as Earth's moon does to human skywatchers, NASA officials said.

The 1-ton Curiosity rover landed on Mars on Aug. 5, 2012 to determine if the Red Planet could ever have supported microbial life. The six-wheeled robot has already achieved that mission goal, finding that a site called Yellowknife Bay was indeed habitable billions of years ago.

Curiosity is now embarked upon a long drive to the foothills of the huge Mount Sharp, whose many layers hold a record of the Red Planet's changing environmental conditions over time. Mission scientists want Curiosity to read that history like a book as it climbs up through the mountain's lower reaches.

Curiosity deputy project scientist Ashwin Vasavada, of NASA's Jet Propulsion Laboratory in Pasadena, Calif., will discuss the rover's first year on Mars tonight (Aug. 15) during a talk at JPL. You can watch the presentation, which begins at 10 p.m. EDT (0200 GMT Aug. 16), live here on SPACE.com, courtesy of NASA and JPL.