NASA's Mars Rover Opportunity has found what scientists believe is the most convincing evidence to date that water may have flowed on the Red Planet.

The rover, which has been crawling along the Martian surface for 90 months, found what appears to be veins of the mineral gypsum, a hydrated calcium sulfate that on Earth is used to make drywall.

"This tells a slam-dunk story that water flowed through underground fractures in the rock," Steve Squyres, a planetary scientist at Cornell University and the principal investigator for Opportunity said in a NASA statement. "This stuff is a fairly pure chemical deposit that formed in place right where we see it. That can't be said for other gypsum seen on Mars or for other water-related minerals Opportunity has found. It's not uncommon on Earth, but on Mars, it's the kind of thing that makes geologists jump out of their chairs."

According to NASA, the rover found several similar veins on the rim of the Endeavour crater, but scientists have homed in on a 16 to 20 inch-long strip about as wide as a thumb that they've nicknamed "homestake."

The Opportunity has traveled 20 miles since it arrived on Mars in 2004, but this is the first time it has observed a mineral deposit like this.

"This is the single most powerful piece of evidence that water once flowed on Mars that has been discovered," Squyres said, according to Wired. "There's no ambiguity about this."

Squyres spoke to reporters at the American Geophysical Union's Fall Meeting in San Francisco on Wednesday.

This isn't the first mineral evidence that water may have flowed on Mars, but Squires told the BBC that this gypsum deposit may indicate a less-acidic water supportive of microbial life.

"The other waters ... were probably very acidic - pH of five, four, three. Gypsum doesn't require that, and so this may hint at a kinder, gentler chemistry of the water for life," Squyres told BBC News.

The solar-powered rover is currently preparing for its fifth winter, exploring areas around the crater where it will be exposed to sunlight.

Opportunity and its twin, Spirit, reached opposite sides of Mars in 2004, but NASA lost contact with Spirit in 2010. In August, Opportunity finished a nearly three-year, 13-mile trek to reach the Endeavour crater.

In November, NASA's Curiosity, a $2.5 billion, nuclear-powered rover the size of a car, launched from Cape Canaveral, Fla. The Mars Science Laboratory, as it's called, is currently on a 354 million-mile trek to the red planet and should arrive in August of 2012. 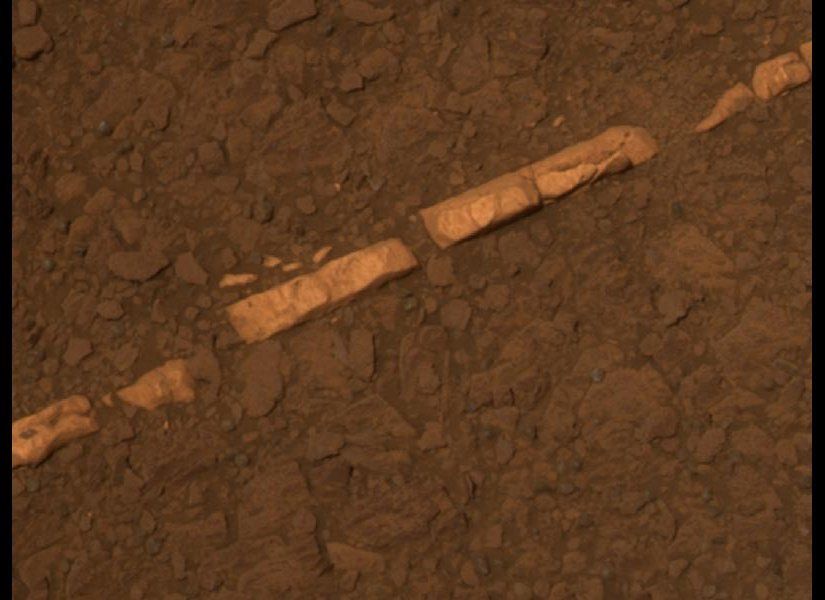