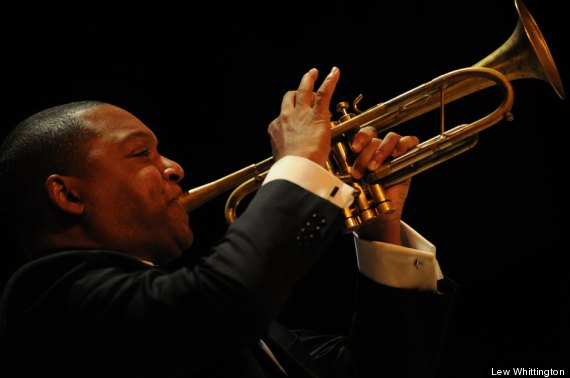 
Last year, trumpeter Wynton Marsalis was in Verizon Hall in Philadelphia, he mostly gave a jazz history lecture, interspersed with a couple of tunes by small jazz chamber ensemble from his Jazz at Lincoln Center Orchestra who dazzled, however briefly. As much as the audience was entertained by Marsalis, the raconteur (he can't become that senior sage soon enough) he left us musically parched. This month, Marsalis, was back with the full 15-piece Lincoln Center Orchestra, and it was all about the music, he gave a few brief song intros, but otherwise cued two hours of protean big-band artistry.

Marsalis is also the artistic director for JLCO and in past concert settings, has been more academic in his approach, for all the right reasons, maybe, but too much reverence can play as sterile. His concerts now are more freewheeling and in the musical moment, which was certainly the case in Verizon this time during this full-throttle, jazz lustrous performance. Marsalis stayed at the top on the bandstand in the back row with his fellow trumpeters, keeping the spotlight on the ensemble -- the brass included the line of trombonists and in the front the saxes, doubling with clarinets.

Some random highlights -- Gerry Mulligan's 'Swing House' from 1951, which seem to state the theme (as Duke used to say) for the evening. The horns flare and the back row even whipped out New Orleans bowlers for the grittiest muted effect, at other moments there were capped-copper mutes, plungers, hands and more hats. Rounding out was Dan Nimmer on piano and the Ali Jackson, who provides a world of percussive drive and various timpani, on a deceptively small kit.

Later, Marsalis paid homage to Duke Ellington one from the 20s 'The Tiger Rag' The pre-jazz age ragtime, structures foretelling Ellington's compositional architecture, and so much early jazz dna in Marsalis' cadenza alone. Then, they played the 'Arabian' section from Ellington's 60s masterwork "The Far East Suite" which is so stylized on the surface, almost cinematic, but the piano by Nimmer, remaining hypnotically Ellingtonian.

More subtleties were brought forth as Marsalis demonstrated how vastly different the big-band sounds of Ellington and Basie were. The Basie band would swing out lustily, concussively and with a rhythmic abandon, demonstrated here on 'I Left My Baby (Standing in the Back Door Crying)' almost a parody of blues, but reined in by his deep well baritone of Chris Crenshaw and this instrumentation. Illustrates how mastered this orchestra is in doing more than reverential styles, or diluted show versions. Marsalis did have a rich anecdote about Ellington finding American blues roots of the Basie band instructive to his own band.

Bassist Carlos Henriquez's 'Two-Threes Adventure' demonstrated how driving the bass can be and this play has an arsenal of tonalities at his fingertips and in his quiver. The band gives equal heft to Chick Corea's "Straight Up and Down" with big-band architecture that potently melds eras and a film noir trombone solo that just transports.

All of Marsalis' solos were controlled, unfussy, resplendent with his signature tone and those long, breathless lines sounding mature and better than ever. Meanwhile he was very much, just one of the guys in the band. His fellow trumpeters, all recognized by him as good, with different qualities to bring to this dynamic survey of big-band jazz. This orchestra can spike sonic power -- but didn't lean on it, mostly this translucent dynamic and explored the variety of big-band orchestral jazz.

Marsalis and JLCO are on an extended tour in the US and Canada in June and in Europe in July.