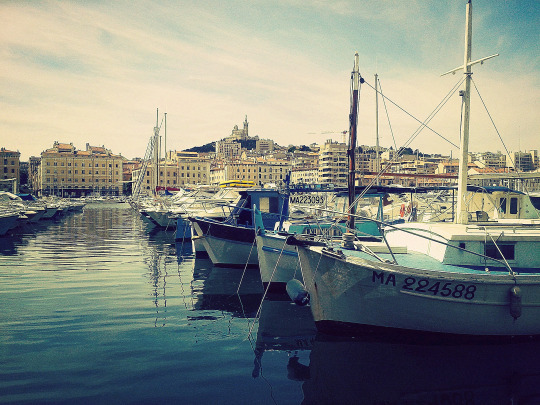 The City by the Sea

Marseille (in the South of France, aka French Riviera, aka Cote d'Azur) is a city of surprises, an ocean-side formerly fortified enclave where strong accent and slang-ish dialect rule the quays of the old port. Mariners of all seas and all fish still sit down on stiff wooden chairs discussing the weather, some smoking a pipe.

Of course the weather is an all-consuming subject matter for rugged people living of and on the water, and their livelihood depends on whether they will sail that day or not. So the topic is huge, along with football (or soccer) and pétanque games. The mood is that of an old black and white film from the 1960s - - some things never change.

With the traditions firmly anchored in the psyche of the old men came a new wave of ultra creative people, high tech designers, explosives architects, and avant-garde daring projects. The south has always been a nest of artists -- painters, writers, sculptors -- and the whitewashed town has been very receptive and welcoming to challenges and renewals.

The various exposures to other cultures and the mingling of migrating minds have created a unique environment where succeeding and inventing new ideas had to be a mode of survival.

Marseille is a city where you walk- to the old port, to the terrace cafés, to the market, to the boutiques, pick up a newspaper, a few croissants and sit on a bench to watch boats coming in at sunset, a lovely way to loose the stress. 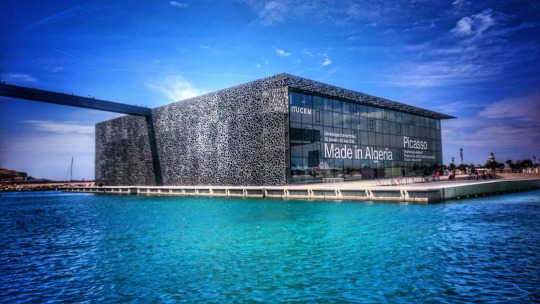 Marseille newest museum, baptized the MuCEM, opened in 2013 facing the ocean, with a surprising architecture. The Musée des civilizations de l'Europe et de la Méditerranée seems to be floating between sky and water, all blues gradually joining for a blinding effect under the white sun.

Celebrating its third anniversary in June, the museum has three distinct buildings linked by pathways, offering over a million objects and artifacts showcasing the story of the entire Mediterranean basin. Contemporary art and special exhibits also denote of the richness of the culture in the southern part of Europe.

Picasso, Jean Genet, Giacometti, all artists who have utilized the lights and colors of Marseille in their art are all masterful subjects of special shows. The amazing lace architecture of the building lets the blinding light filter through like an oriental design meant to reminisce of wanted shade in a scorching day, creating patterns of dark and light on the floors and the roofs. 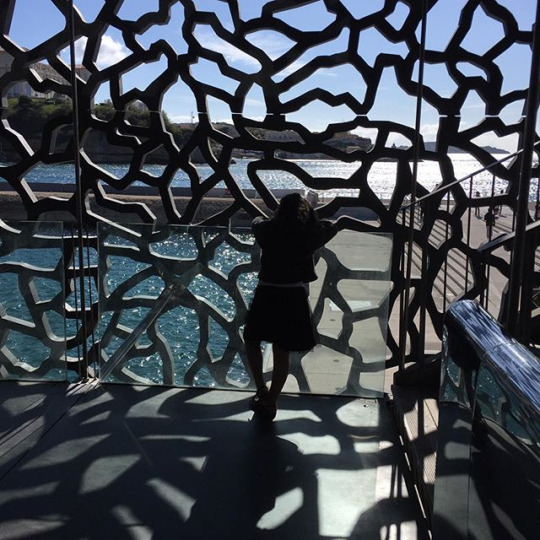 Created by starchitect Rudy Ricciotti, the museum drew the attention of all masters of contemporary design. Ricciotti is not a true Provence son but a French Algeria one, born to Italian-Gypsy parents, making him a better representative of one chapter in Mediterranean history.

The location of the museum happens to also be where thousands of pieds-noirs disembarked after the Algerian independence. Ricciotti was nervous when presenting his project for the new museum:

"I undertook the MuCEM in a state of anxiety. I wasn't worried about losing [the design competition], I was afraid of winning with a scheme that would be a mistake. I designed it with fear in my guts, under the pressure of that metaphysical horizon that is the Mediterranean, of that cobalt blue that becomes Klein blue then ultramarine, that drives you mad after a while and turns silver when the wind gets up. It's violent".

Released a couple of days ago , the new free-to-stream Netflix series "Marseille" displays the city with incredibly beautiful vistas drenched in vivid colors, almost as if the film wanted to make it irresistibly attractive. French Actor Gérard Depardieu is the mayor of the city by the sea, with all plotting and farce associated with high power positions in a city famous for its revolts and proud of its unique identity.

More:
ArtpicassomarseilleNetflixProvence
Newsletter Sign Up
An essential daily guide to achieving the good life
Subscribe to our lifestyle email.
Successfully Subscribed!
Realness delivered to your inbox