The Republic of the Marshall Islands in the northern Pacific Ocean is not only a breathtakingly beautiful island state, but has recently moved into the public eye by starting a bold initiative that is widely interpreted as a "David against Goliath" undertaking.

The Marshall islands were subjected to dozens of nuclear tests, carried out by the U.S. after 1945.
According to the Associated Press, the island group filed suit in late April against each of the nine nuclear-armed powers in the International Court of Justice in The Hague, Netherlands. It also filed a federal lawsuit against the United States in San Francisco.

The Marshall Islands claims that instead of negotiating disarmament, the nine countries are modernizing their nuclear arsenals, spending $1 trillion on those arsenals over the next ten years.

"I personally see it as kind of David and Goliath, except that there are no slingshots involved," David Krieger, president of the California-based Nuclear Age Peace Foundation, told AP. The Foundation is acting as a consultant in the case and is hoping that other countries will join the legal effort, Krieger points out.

Russia, Britain, France, China, Israel, India, Pakistan and North Korea are included in the indictment. The last four are not parties to the 1968 Nuclear Nonproliferation Treaty (NPT), but appear to be, according to the lawsuits, bound by its provisions under "customary international law." The NPT, considered the cornerstone of nuclear disarmament efforts, requires negotiations among countries in "good faith" on disarmament, AP reports.

None of the countries had been informed in advance of the lawsuits. The case found broad recognition within the international press.

The Foreign Minister of the Marshall Islands, Tony de Brum, explains in an interview the impact the nuclear tests had and still have for his citizens and what he hopes this lawsuit can achieve for the island state and the world community. 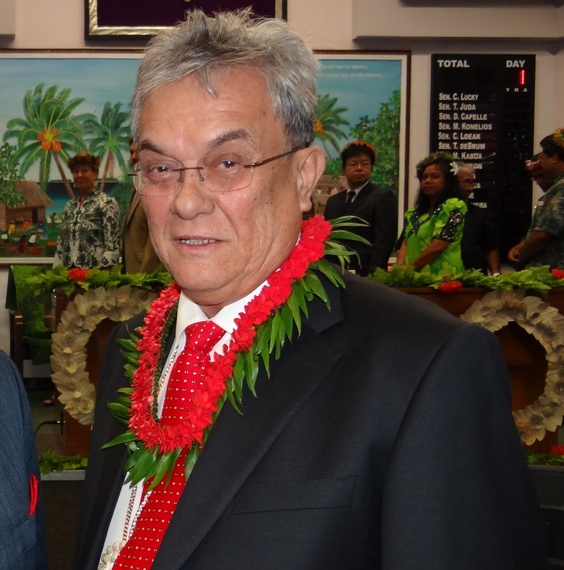 You grew up on the island of Likiep during the 12-year period when the United States tested 67 atomic and thermonuclear weapons in the atmosphere and under water in the Marshall Islands (1946-1958). What are your memories on the impact these tests had for the island of Likiep and its inhabitants? Environmentally, politically and psychologically?

My memories of the tests are a mixture of awe, of fear, and of youthful wonder. We were young, and military representatives were like gods to our communities and so our reactions to the tests as they took place were confused and terrifying. We had no clue as to what was happening to us and to our homelands. Our elders, including my grandfather, tried to stop the tests in petitions and communications to the UN but were not successful. I personally witnessed the injuries to some of our countrymen from Rongelap and to this day cannot recall in words my sense of helplessness and anxiety without severe emotional stress. But for as long as I can remember, the explosions and the bizarre effects that lit up our skies are still a source of pain and anger. How could human beings do this to other humans?

While in later life many attempts have been made, both in good and bad faith, to reconstruct the impact of the testing on our people, only the physical and environmental effects can be discussed with some confidence. The emotional and psychological trauma to our people, both young and old, cannot be measured in real terms. The pain is real and the uncertainty is overwhelming. As a young lady said to me when showing me pictures of her dead deformed infant child, "God did not create my baby. He cannot be so cruel."

The Republic of the Marshall Islands recently filed an extraordinary lawsuit at the International Court of Justice in The Hague, suing all nine nuclear weapons possessors for failing to eliminate their nuclear arsenals. But only three of the nine nuclear states named by the lawsuit generally accept the rulings of the International Court of Justice. What do you hope for the outcome of this case?

My country has exhausted all means within our limited power to bring attention and closure to our outstanding nuclear issues with our former Administrative Authority, the United States. Mechanisms jointly established for dealing with outstanding claims for physical injury and property damage have fallen way short of satisfying even the basic findings of the Nuclear Claims Tribunal formed under treaty agreements. This is due mostly to the withholding of critical information necessary for us to make informed decisions regarding our nuclear past and our uncertain future. To this day the United States still refuses to release information we have identified and requested under established processes. All the while we have to cope with displaced communities, skyrocketing medical costs, dangerously radioactive environments, and deprivation of use of traditional lands.

The United States tells us they have satisfied their obligation under the Free Association Compact, a Treaty, and that they will not entertain any claims or requests for meaningful assistance in this issue. In fact, the US Supreme Court refused to hear the cases of the People of Bikini and the People of Enewetak seeking damages for their destroyed homelands. After seeing what mere testing of these terrible weapons of mass destruction can do to human beings it makes sense for the Marshallese People to implore the nuclear weapons state to begin the hard task of disarmament. All we ask is that this terrible threat be removed from our world. It is the best we can do as collateral damage in the race for nuclear superiority. Our sacrifice will be for naught if the nuclear countries do not stand up and take notice of the evil that nuclear weapons present to our earth.

Do you think that this case can help to create enough international momentum for the Non-Proliferation-Treaty (NPT) to be treated -- due to its near universal adherence -- as part of customary international law by which all states must abide, regardless of whether or not they actually signed the treaty?

We believe that it is sensible and logical for the world community to consider this matter as one of customary international law. To do otherwise is to gamble with the future of the world.

What effects would that have on the discourse of nuclear disarmament worldwide?

It should stimulate intelligent discourse and wise solutions. For what would it gain the world for instance, to be protected from climate change, only to suffer massive destruction from nuclear weapons? All our efforts to be sane about the future must be connected to survival and peace. The right hand cannot be out seeking climate peace while the left is busy waging nuclear war.

Looking at the status quo of this discourse, how do you evaluate the outcome of the recent NPT PrepCom at United Nations' headquarters in New York City which closed without adopting the Chair's draft recommendations to the Review Conference?

The outcome of the recent NPT PrepCom appeared to be more "business as usual," with the nuclear-armed parties to the treaty essentially evading their Article VI obligations or claiming they were fulfilling them in a step by step manner, while at the same time continuing to modernize their nuclear arsenals and relying upon them in their military strategies. It is clear that the nuclear-armed states are not pursing negotiations in good faith to end the nuclear arms race and to achieve complete nuclear disarmament, as they are obligated to do under Article VI of the treaty.

I hit upon this somewhat in question four but clearly one cannot isolate climate change from the other most pressing issue of world security today. They go hand in hand, and must be dealt with in a coordinated and universally accepted pathway. As a country that has seen the ravages of war, suffers the lingering effects of nuclear tests, and facing the onset of a rising sea, we see all these to be threats of equal force against world peace and human life. But finger pointing and challenges of who goes first must now stop and sane and intelligent human beings must confront this insanity with firm confidence and clear peaceful intentions.