The iconic, beady-eyed Marshmallow Peep is a beloved confection. It perches on shelves all year long in some flavor or design, but come Easter, the little bird makes an extra special appearance, when celebratory baskets are filled with the classic, saccharine nibble.

Despite the welcomed nostalgia we experience, year after year we feel a bit unfulfilled after indulging in our fair share of Peeps. The bird leaves behind neon streaks on our tongues and buzzing questions in our heads. What's the right way to eat a Peep? Can I relieve stress by annihilating the candy? This year will, undoubtedly, be different. Those burning Peep questions have been answered at last. All Peeps inquiries, as you'll find below, have been put to rest.

How are Peeps born? Are they immaculately conceived, or perhaps resurrected?
The former, sort of. The world's first born Peep took 27 hours to create, hand-squeezed by a pastry piper (talk about labor-intensive). Peep production has since been whittled down to a six-minute science: The bird materializes from a combination of sugar, gelatin and air at the Just Born Inc. factory in Bethlehem, Pa. It's a good thing Peeps-makers have figured out a way to cut down the birthing time: Approximately 5 million Peeps products are popped out a day, and every year, enough Peeps candies are manufactured to circle the earth twice (which means two billion Peeps candies are produced annually).

Why don't Peeps have wings?
Good question. The original bird once had a wider wing span, but the style was short lived. In 1955, just two years after their introduction to the market, Just Born Inc. nixed the Peeps' wings to "give them a sleek, modern look." 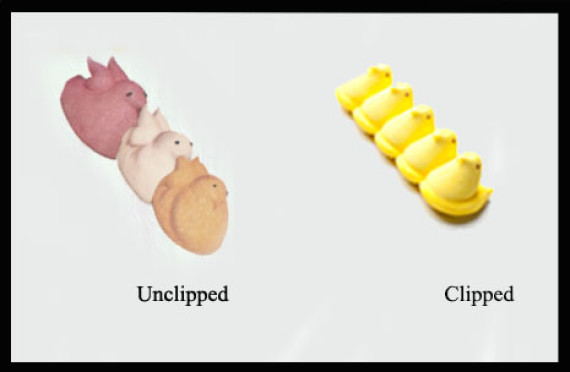 It's not clear as to why the wings had to go, but the flightless look paid off. The now-classic chick is considered to be the most favored Peep of them all, according to 2013's Peeps survey. 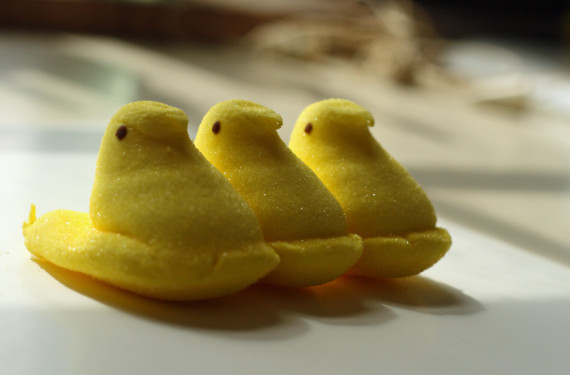 Is there a proper way to eat a Peep?
Nope, you can't go wrong. Some like to bite off the heads first. Others like to pop a few in at once (Harmon Leon holds the record for most Peeps fit in open mouth. His number is 10.)

Matthew Pye, the vice president of Trade Relations and Corporate Affairs for Just Born Inc., tells HuffPost that the younger the Peep, the better it tastes. "I like to eat them fresh off the line -- you'll never have them like that."

And you probably will not: Tours of the world's only Peeps factory are not open to the public, so we'll have to trust Pye's word. "They're warm, fluffy and gooey."

Pye shares another way to savor Peeps that is more accessible, if a bit dangerous. He appreciates roasting the pastel puff on an open fire. "The sugar is flammable, so be careful," he warns. "The Peep gets coated in a black, glassy shell -- it gets caramelized, and inside is a gooey marshmallow." He'll eat the toasted Peep straight from the stick, or sandwich it between two graham crackers. 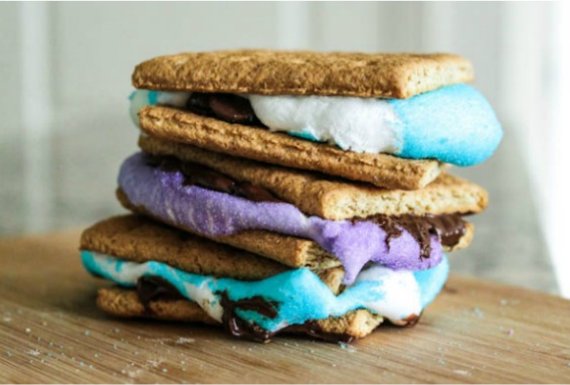 Get the Campfire-Free Peeps S'mores by Sally's Baking Addiction

Am I the only one who likes my Peeps a little on the old and crunchy side?
Hardly. "Everyone thinks they're the only ones who like stale Peeps," Pye says. He prefers to reference this strain of Peep as "aged" -- "like a fine wine" -- rather than "stale." "Seventy to 75 percent of our consumers like it fresh," he estimates, but a fair amount happen to like their birds on the harder side.

Despite a sizable love for a harder bird, Just Born, Inc. has no intention of selling their quintessential candy as anything less than fresh. "If we were to produce a stale Peep, we couldn't satisfy what the people want," Pye says, as hardness preference depends on the individual snacker. "We let the consumer do it themselves." For some, reaching the desired bite means poking a hole in the plastic package and letting the birds and bunnies get some air for a couple of days. Others go so far as putting Peeps in the refrigerator (hopefully, far from the eggs).

If you fall into the aged-Peep camp, you probably know how to get the firmness you desire. If you're still in the dark, here's a simple, step-by-step tutorial.)

How can I make Peeps part of my everyday diet?
In more ways than one. Peeps a la s'more may be delicious, but they are in no way the most innovative Peep recipe to date. Consider topping some Peeps on your pizza pie (Peepza). Or, better yet, enjoy some Asian fusion with Peep-inspired sushi (Peepshi). Or squeeze some marshmallow into your serving of fruit with strawberry-grape-Peep kebabs.

If you're feeling gluttonous, prepare your Peep deep-fried. Add some healthy fats to your meal by squeezing your Peep between a peanut butter sandwich. Just got your wisdom teeth out? You don't have to give up Peeps. Blend them into a milkshake. Calcium!

Great! Should I go ahead then, and make Peeps part of my everyday diet?
Inconclusive. Peeps are by no means a gut-buster. Each classic, chick-shaped candy contains 28 calories per bird (that's 140 calories for a pack of five), which is paltry in comparison to other traditional Easter candies.

Despite its wee calorie count, a single Peep requires 16 ingredients to come to life -- namely gelatin, liquid sugar, corn syrup and more sugar. The most natural thing about a Peep may be the air that gets pumped into the sugar mixture to give the bird its fluff factor. So, it's up to you if you want to put that kind of stuff into your body every day. The World Health Organization recommends a daily intake of about 25 grams of sugar per day for an average-sized adult. A five-pack of Peeps will set you back 34 grams of sugar, so you could theoretically eat a couple individual Peeps a day and stay within the guidelines.

Do bunny-shaped Peeps taste gamier than the chicks? 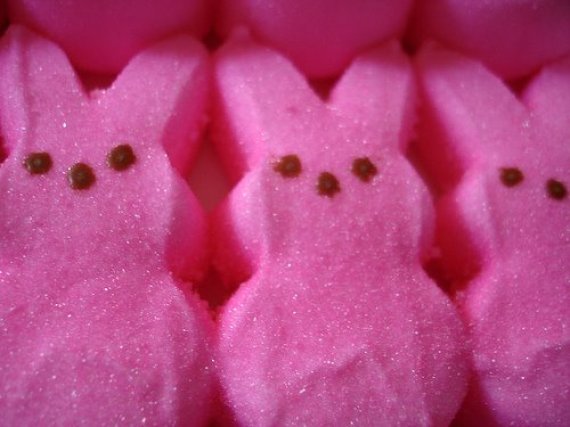 No. The original Peeps bunnies and chicks have the same, sugary taste no matter their shape or color. Marshmallow Peeps do come in several fancy flavors, however, including chocolate mousse, chocolate-covered and even "party cake."

Am I the only one who thinks Drew Carey looks like a Peep?

Funny you should ask. In 2003, for the product's 50th anniversary, Just Born Inc. published a Peeps survey as a barometer for the "current reading of the 2003-Peeps climate." The 515 people interviewed were asked which public person or celebrity most resembled a Peep (either in physical build, personality or both.) According to the published report, "TV personality Drew Carey drew 26.8 percent of responses, while movie star Drew Barrymore and TV anchor Al Roker received 8.1 percent and 7.9 percent, respectively."

OK, but what if other celebs come to mind when I think about Peeps?
Just Born Inc. has continued to ask consumers what celebrities they associate with their marshmallow product. Stars like Will Ferrell, Jessica Simpson, Elton John and Snoop Dogg (now Snoop Lion) have all earned the honor. 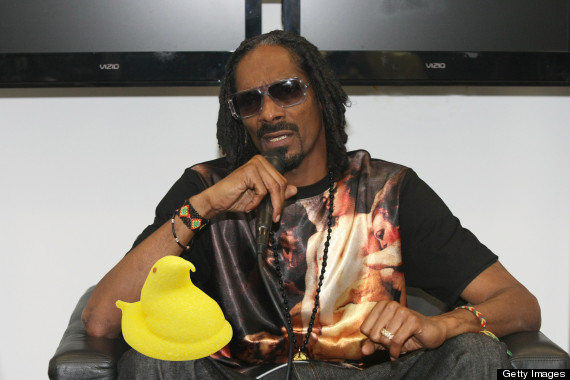 I wish I wasn't reading this. I hate Peeps. Everything about them. Anyone else?
You could start a gang if you wanted. In a 2012 blog on the Guardian, writer Brian Moylan published his disdain for the candy in a piece entitled, "Sorry, But Peeps Are Disgusting." Moylan doesn't just criticize the product for taste, which he diminishes to "slime," but also slams the Peep for its color, design and the nostalgia often associated with it. Flavor, still, is Moylan's biggest hang-up.

Can we just stop fooling ourselves that marshmallow is a flavor? Well, it's a flavor, but, like the last syllable of the word, it's mellow. It's nothing to write home about. It's just gooey and sticky and kind of like biting into a really soft pencil eraser.

If you don't have the time to pen a scathing review, but want the world to know where you stand, you could join the "I Hate Marshmallow Peeps" page on Facebook. That'll show 'em.

You've misunderstood. I detest Peeps. I'd kill them if I could. Can I?
Yes. And you've got a lot of options. There is sadistic subculture that exists within Peeps' fandom (or hatred). On the website "100 Ways To Kill A Peep" users can submit methods of Peep massacre, and select favorites through a 5-star rating system. The site hosts pages of submissions, with carnage that ranges from electrocution to samurai seppuku to hanging.

If you really want to seem them suffer, you could pit two Peeps against each other in a jousting competition. Place two Peeps on a plate and insert a tooth pick (the weapon) into the tummy of each. 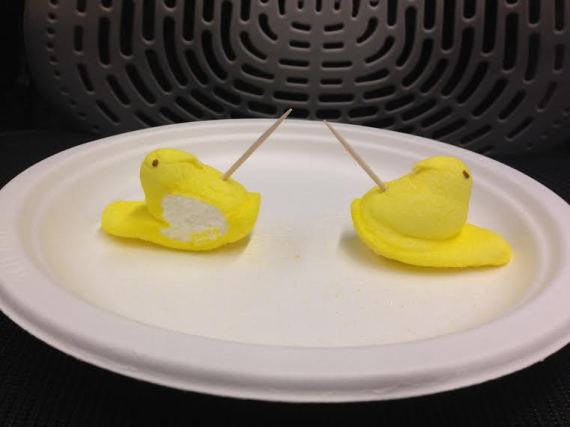 Then, set the Peeps in the microwave for face-off. As the Peeps heat up, their bellies expand and the toothpicks move forward. The winning Peep is the Peep who pokes his or her opponent first. 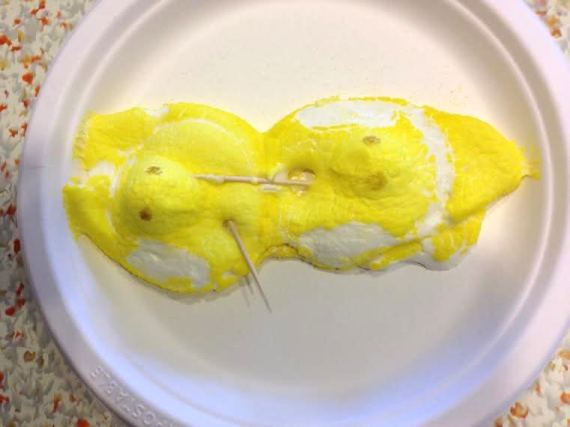 The Peep on the right is this battle's champion, but ultimately, both Peeps (and perhaps you) lose.

Is there anything cuter than a plump little Peep?
Just this combination.