I have great respect for life coach Martha Beck, though I wouldn't go so far as to say I'm loyal fan. I'm talking about the O, The Oprah Magazine advice columnist and New York Time's best-selling author of "Expecting Adam" and "Leaving the Saints." Saying I'm not a fan of Oprah's favorite life coach, I realize, might sound like I'm saying I do not like Dr. Seuss' "Green Eggs and Ham."

Who in their right mind would say anything less than glowing about a cherished children's classic or one of Oprah's chosen few? That would be me. (Oh, but I do wholeheartedly love "Green Eggs and Ham.") 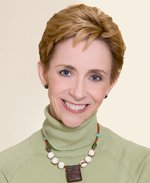 For sure, Beck's "O" column brims with illuminating insights most every month. But it's her simple solutions to complex problems that I don't fully endorse. Life is complex. My therapeutic understanding of lasting change just doesn't fit into her view of the world. As a psychotherapist specializing in eating issues, it's a rare day that a handful of insights, practices or experiences is enough to help a client change for good.

Given my issues with Beck's solutions, like her zero-anxiety, zero-attachment diet, you might wonder why I agreed to a long-distance coaching session with the Phoenix transplant (she hales from Provo, Utah). I certainly found myself wondering just that as I turned to her column in the latest issue of "O."

Truth be told, I wanted to learn more about Beck, so I contacted her with the intent of turning it into an interview. She agreed, but only if I would allow her to coach me on something. I wasn't thrilled, particularly about giving her control of the interview, but I wanted to learn more about her, and my curiosity overrode my reluctance. But if she was going to coach me on something, what of all things should I have her coach me on? As it turned out, I had plenty she could help me with.

True confession: Writing "The Self-Compassion Diet" had made me weak. I'd been having trouble getting back to exercising and dealing with my osteoporosis, the bone-thinning disease. So I agreed to let her coach me on that. Frankly, I could use all the help I could get.

The coaching experience didn't go anything like I'd expected but, in the end, Beck helped me more than I could have hoped. Here's how it went.

"Coaching is not like school, and it's not like therapy." I was all ears as Beck started the session. "It's a conversation between equals," she explained, "where one person volunteers to be a leader by serving the other's life quest for truth." To a traditional psychotherapist like myself, Beck's approach sounded like a refreshing change of pace.

After explaining my wish to workout more enthusiastically, rigorously, yet self-compassionately, I expected Beck to do what she does in her writing -- prescribe simple, practical solutions. However, unlike her writerly self or Ellen DeGeneres' yogi, who recently offered me the requisite insights on the interview topic at hand, Beck decided I needed help with both my exercise routine and my writing regimen. I wasn't so sure, but I went along for the ride.

I'd already done a journalistic background check, so I wasn't surprised by the ambition or complexity of her approach. This Harvard Ph.D., come to find out, is not only an accomplished coach and writer, but a successful business woman. She runs a consulting company with Karen Gerdes, her business and life partner. Beck, a divorced mother of three, came out of the closet after separating from the Mormon Church and the father of her children. What's more, she has effectively recovered from depression, anorexia and fibromyalgia.

If anything took me by surprise, it was her take-charge attitude from the get-go.

"Do you have a favorite poet?" I didn't know how my youthful infatuation with Sylvia Plath or Edgar Allan Poe would help me improve upon my fitness or my writing routine, but I tried my darndest to answer Beck's questions: "Ever think about lines from movies, TV shows or novels while you're doing other things, like driving or doing the dishes? ... Where does your mind go when it's just idling?" Hmm. When I came up with nothing, Beck simply kept the thought-provoking questions coming.

When she asked me how it feels to come up with a great story idea like the one I wrote about another of Oprah's coaches, Geneen Roth, I eagerly explained how the ideas just bubble up. Could we be getting somewhere? Hard to say. Before I could get my bearings, Beck forged ahead with a scientific explanation about the origin of ideas, then stopped me in my tracks with her unusual honesty.

"I don't think you're being compassionate to yourself!" she declared. "Not in your writing, and not in your working out. Nothing that serves our life in one area destroys it another way." Yikes! I had no idea how Beck had reached such a sudden and curious conclusion but, as much as I hated to admit it, she'd just hit the nail on the head. I did what I could to sound curious, not defensive, but truthfully, I was feeling a good bit of both.

As Beck spelled out her provocative position, passion turned up her volume. We didn't evolve to sit in a chair, she explained. "We'd starve to death if all we did was sit [2000 years ago]. We evolved to move and to learn with all our five senses!" Expounding on the all-too-common expectation that children sit still in school, her passionate pitch hit a crescendo. "It's grotesque! It's like foot binding!"

"I see that you're passionate about the subject," my inner therapist managed to say before my inner child, and then Beck broke up laughing. Equals at last, but not for long.

Foot binding, horse whispering, turtle stepping, oh my! Before I could catch my breath, Beck forged ahead. With each new poetic comparison, with each new scientific explanation, I found myself going where I'd never planned on going -- deeper into confusion.

In hypnosis, which I've been known to teach my own clients for habit change, there's a term for what Beck seemed to be doing: confusion technique. That's where the hypnotherapist so completely confuses the subject that the subject drops down into a very deep, receptive state. I didn't believe Beck's intention was confusion, but that was the net effect.

Suddenly, out of my confusion bubbled clarity, and the quotable quote Beck had requested earlier. "I went to the woods to live deliberately," I found myself quoting Henry David Thoreau. "That's a quote that actually motivates me."

"There you go," she chimed. "It's the elephant part of the brain. Elephants never forget."

After all was said and almost done, Beck gave me what I'd been expecting all along -- simple, practical, personalized solutions:

Uncharacteristically, I found myself admiring the simplicity of her solutions. And yet, I was having trouble imagining taking one turtle-step forward. In trying to keep up with Beck, hopelessness had settled over me like a lead dentist's apron. I told her as much. At which point, she asked me two final questions: "What would Oprah say?" and "What would you tell a friend about this coaching session?"

I told her Oprah would say something understanding, encouraging. As for my friend, I'd tell her I valued some of Beck's suggestions, especially the one about consecrating a space. Answering these questions resurrected some hope, but not my belief in myself. I wasn't sure if I could now beef up my workouts, or even do what I routinely do: spin a story from a phone conversation.

In the final minutes, Beck helped me envision success. Like a skilled hypnotherapist, she gave me several direct suggestions: Put down the phone. Pick up a notebook. Go for a walk. Have fun. Do three push-ups. Tomorrow, write down what you truly think. Write: "I talked with Martha Beck. She told me to go play in nature, to trust something will bubble up. I'm not sure this will work, but I'm going to try it."

To my happy surprise, I followed her suggestions to a T. I hung up, grabbed a notebook and hit the hiking trail out back. Almost immediately, ideas started bubbling up, just as Beck said they would. I walked deliberately through Thoreau country, savoring the glorious weather. When I got to a sunny clearing pond-side, I dropped down on a golden bed of pine needles and did the best push-ups of my life. I felt remarkably energetic, strong, capable.

As I write the final words of this blog, I'm well aware that I may never like Oprah's coach quite as much as Ellen's Yogi Cameron. But an effective coach, Beck has taught me, need not be your favorite person. I may have loved Cameron's words of wisdom, but it was Martha's health-affirming advice I put into play.

Go figure. Better yet, go outside and play. By the way, if you see Ellen, tell her to give me a jingle. We need to talk about her new book.

Jean Fain is a Harvard Medical School-affiliated psychotherapist specializing in eating issues, and the author of "The Self-Compassion Diet." For more information, see www.jeanfain.com. Got a thing o two to say about any of the above? Please share in the comments section.