The controversy over the paraphrasing of Martin Luther King, Jr.'s "drum major for peace" quotation, which is etched in stone on his new memorial in Washington, D.C., raises the larger issue of how the iconic civil rights leader will be remembered in history. For me, it recalls the firestorm of criticism my daughter Caitrin faced in China a few years ago, following the U.S. invasions of Iraq and Afghanistan, when she translated and staged an American play about Dr. King in Beijing. She had hoped the play would soften Chinese criticism of U.S. foreign policy by showing a "positive side of America," and she was pleased when the Ministry of Culture approved the script. As an American producer abroad, she felt a "responsibility to King's legacy." She was especially determined to highlight his opposition to war, which she felt had been ignored or watered down in recent years.

Instead, the project became embroiled in discussions about appearances: clothing favored by the slain civil rights leader, whether the Chinese actor playing him should grow a moustache and whether it was realistic for the actor playing JFK to smoke a cigar on stage. Some differences in interpretation were cultural, for example, whether it was appropriate for Chinese actors to wear black face to represent King, Stokely Carmichael, Malcolm X and other African-Americans. While black face is considered unacceptable on a U.S. stage, Chinese productions had employed it in the past as a sign of respect (the makeup was not used in this play).

A more serious dispute took place when the Chinese director wanted the play to suggest that someone in Dr. King's inner circle might have been responsible for his assassination, a theory my daughter argued had no historical basis. The director insisted the issue was one of artistic license. "Theater is art," he said, "not history." 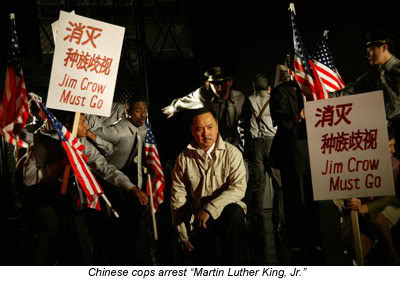 Initially, it was my daughter's hope -- perhaps a naive one -- that Dr. King's belief in non-violent change would inspire China's 56 minorities, much the way Ghandi's philosophy had done in the struggle for equality in the deep south in the 1960s. But the director said the play's message was an American one and he explicitly rejected such comparisons. Intent on presenting a U.S. period piece, he festooned the Chinese stage with the Stars and Stripes and placards in English that said "Jim Crow Must Go." In one scene a black and white a television set showed an image of Marilyn Monroe.

In the end she came to believe there are "two Martin Luther Kings" in U.S. and Chinese understanding. The best known is the I-Have-a-Dream King, the young clergyman who gave the famous speech on the National Mall in 1963. He is the one the world remembers as the champion of a colorblind society. She calls him "King #1." But today many people, according to Caitrin, ignore the "other" King, the prophet of non-violence whose thinking by the time of his death had evolved -- to world peace. He had become convinced that war robs the poor, that fighting in Vietnam and pursuing social justice at home were incompatible goals. That's "King #2," she maintains; schoolkids and the public should remember this viewpoint, too:

"I could never again raise my voice against the violence of the oppressed in the ghettos," Dr. King declared in 1967, " without having first spoken clearly to the greatest purveyor of violence in the world today -- my own government."

It is unlikely that such words will ever be carved on a monument on the National Mall. Back then they earned King the condemnation of editorial writers, members of Congress and many of his own allies in the civil rights movement.

The negative reaction was not unlike what my daughter Caitrin encountered in China. When she asked Chinese people whether King #2's message of non-violence could help reform the Chinese government, a common response from Chinese people was that their government didn't need reforming. One man turned the question around. Pointing critically to the U.S. invasion of Iraq, he suggested that Dr. King's message of peace "ought to be brought back to the USA."

China is not the USA. And 1967 is not 2011. But time and place do color our take on history, and to some degree the 30-foot Martin Luther King monument in Washington, D.C. is a Rorschach test: my daughter Caitrin and the rest of us see in its colossal image what we bring to it. President Obama, who is scheduled to deliver the dedication speech on October 16th, will remember Dr. King, a fellow Nobel laureate, in his own way. Caitrin will be there in the audience, and I'll be interested in getting her take. 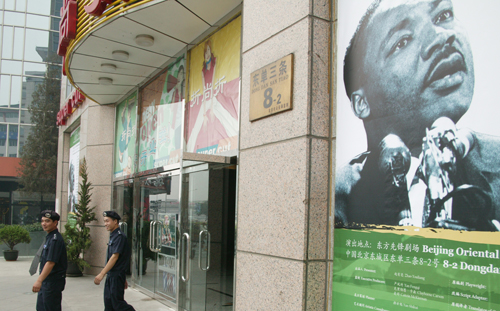