"I've been in many demonstrations all across the South, but I can say that I have never seen, even in Mississippi and Alabama, mobs as hostile and as hate-filled as I've seen in Chicago." ~ Dr. Martin Luther King Jr. 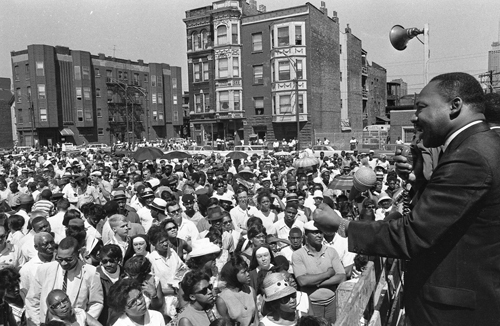 Following the passage of the landmark Civil Rights Act of 1964 and the Voting Rights Act of 1965, Dr. Martin Luther King Jr. and the Southern Christian Leadership Conference (SCLC) could have retired from the national fight for civil and human rights. King's activism was deeply rooted in fighting segregationists and the inequitable distribution of resources in the South. The campaigns in Montgomery, Selma, and Birmingham forced the nation to recognize that the social inequality experienced by Black Americans, which was engineered by elected officials, negated the democratic commitments expressed in America's founding documents. But that was not enough. King's philosophy of interdependence and the notion that "injustice anywhere is a threat to justice everywhere" expanded his commitment from civil rights to human rights. Human rights, according to King, were under attack by the triple evils of racism, poverty and militarism.

Instead of cementing his civil rights legacy in the policy gains of 1964-65, which so many of us are guilty of, Dr. King shifted his gaze towards the profound segregation and economic inequality in northern cities. Principle among these was the windy city of Chicago. Civil rights alone would not render the freedoms necessary for Black Americans to secure full citizenship. Voting rights were incomplete prescriptions for freedom without the power to support a candidate financially or develop a platform that would support the advancement of Black families. Integration laws were void if Black families did not have access to purchase housing outside of historically black communities, such as North Lawndale or Bronzeville. Dr. King maintained his nonviolent direct action strategy in Chicago. However, his experience in urban America shifted his demands from policy changes in America to economic reparations and subsidies by the federal government for years of neglect and disenfranchisement.

Black families were relegated to slum contract housing, unable to accrue wealth and property ownership, while white families thrived in separate and unequal housing conditions. The Chicago Freedom Movement was inaugurated in 1966 and marches were planned through the all white neighborhoods of Gage Park and Marquette Park. Local organizers would join Dr. King in visiting tenants in slum housing and encourage them to withhold rent, participate in community clean ups, and march on city hall demanding redress for the economic inequity in Chicago. This eventually resulted in an agreement with the city to enforce open housing laws. Despite their efforts and gains, the Chicago Freedom Movement failed the ultimate goal of integrating Chicago and dismantling the infamous government patronage machine. To date, Chicago is still the most segregated city in the America. Black and Brown children are still targeted unjustly and gunned down due to extrajudicial killings. The Chicago machine still restricts the economic mobility and political strength of Black and Brown communities through the corrupt patronage system. 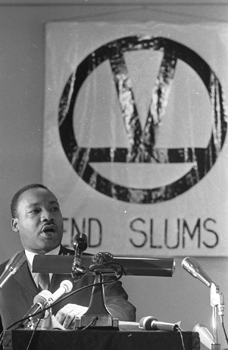 Many Black residents in Chicago were trapped in decaying neighborhoods after they migrated from the South looking for jobs. Any opposition to the Mayor, then Richard J. Daley, was dangerous because of his power over city services and influence over public housing and welfare. Whenever Dr. King would raise an issue, Mayor Daley would institute a response to present the illusion that the city was concerned, and then withdraw the services that were distributed. The Mayor's ability to mobilize services weakened Dr. King's claims of city negligence. Mayor Daley was unlike any other adversary King confronted. Southern adversaries such as Bull Conner, George Wallace, Jim Clarke and Lester Maddox were defeated due to local coalitions that supported the agendas of King, Bayard Rustin, Ella Baker and other activists. However, Dr. King did not receive the support of Chicago clergy as he did in the south because they were co-opted and refused to call injustice and oppression by their right names.

Though King's campaign in Chicago was a failure, the merit and goal of the Chicago Freedom Campaign require our continued attention. Dr. King was a prophet who did not allow the industrial advancement of the north to obfuscate structural violence and the debilitating condition of poverty. The profound segregation in urban cities permits the poor to go unnoticed and privilege to be undisturbed. This past winter, the city and nation was horrified by the public execution of Laquan McDonald. Even more appalling was the cover up by City Hall and the Chicago Police Department. This entire saga was virtually ignored because Laquan lived in a neighborhood that was deemed less valuable in the city of Chicago. If Laquan McDonald were shot 16 times in the middle of the University of Chicago or Northwestern University, the campuses, we would have displayed more compassion for him. Nevertheless, because of the location of his community and the expectation for him to fail in that community, his elected officials and the police review authority passively ignored his murder until they faced national scrutiny.

When we consider Dr. King as a failure in contemporary society, the notion is often disregarded as blasphemous. However, Dr. King's failures point us toward existing forms of oppression that still need to be confronted and abolished. The city of Chicago is one case that represents hundreds of urban cities that capitalize on the labor of the poor and protects the interests of the wealthy. As long as people are forced to live under the debilitating conditions of poverty, police brutality, and chronic joblessness, there will never be peace in a society, only brief respites of calm. Dr. King's sentiment that "those who make a peaceful revolution impossible will make a violent revolution inevitable" has been on full display across the country as Ferguson, Baltimore, Staten Island, and Chicago have grappled with urban inequality and methods to close education and wealth gaps. As we commemorate The 50th anniversary of the Chicago Freedom Movement, let us call to mind his courage to fail in his pursuit to destroy systems of oppression. Though failure is an ever-present reality in justice work, every action we make to disrupt the social order bends the arc of the universe towards justice and exposes the demons that threaten our democracy.