Martin Luther King said the basis of disparities between the races had as much to do with income inequality as outright racism in his book, Why We Can't Wait. "Many white Americans of good will have never connected bigotry with economic exploitation. They have deplored prejudice but tolerated or ignored economic injustice."

In other words, discrimination has as much to do with socio-economic status as the color of one's skin today. This is the 50th anniversary of his "I have a dream" speech, and income inequality is the highest for most Americans since 1929, not just for African-American and other minorities. In fact, most economists now agree such record income inequality has been the root cause of both the Great Recession, and Great Depression.

Nobelist Joseph Stiglitz highlighted why the fight for equality was so important:

"Listening to Dr. King speak evoked many emotions for me," said Dr. Stiglitz. "Young and sheltered though I was, I was part of a generation that saw the inequities that had been inherited from the past, and was committed to correcting these wrongs. Born during World War II, I came of age as quiet but unmistakable changes were washing over American society."

As of 2010, white families, on average, earned about $2 for every $1 that black and Hispanic families earned, said the Urban Institute in a recent report, a ratio that has remained roughly constant for the last 30 years.

And when it comes to wealth -- as measured by assets, like cash savings, homes and retirement accounts, minus debts, like mortgages and credit card balances --non-Hispanic white families, on average, were about four times as wealthy as nonwhite families, according to the Urban Institute's analysis of Federal Reserve data.

Why has this happened? The Great Recession is the easy answer because it hit blue collar and union workers hardest, but economic policies since the 1970s have tilted incomes away from wage earners towards corporate profits.

The Center For Public Policy and Priority fellow and vice-presidential advisor Jared Bernstein highlighted this in a recent study.

"The arithmetic of national income accounting is such that when average compensation lags behind productivity growth, as has been the norm in recent years, income is redistributed from paychecks to profits. That's a characteristic of growing inequality and flows quite simply from the observation that the economy's growth has to be going somewhere."

And where have corporate profits gone during that time? That's a topic for another column, but according to the Federal Reserve, as of the third quarter of 2012 nonfinancial corporations in the United States held $1.7 trillion of liquid assets - cash and securities that could easily be converted to cash. 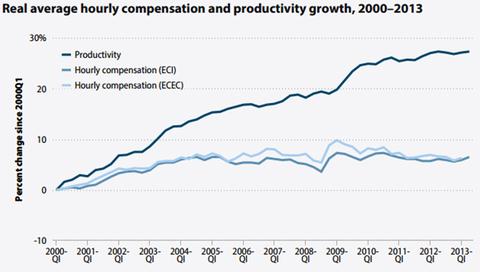 Bernstein's graph highlights how much of the productivity gains in the past decade have been lost to workers with hourly compensation. The EPI report he cites by Lawrence Mishel and Heidi Shierholz said, "Between 2002 and 2012, wages were stagnant or declined for the entire bottom 70 percent of the wage distribution. In other words, the vast majority of wage earners have already experienced a lost decade, one where real wages were either flat or in decline.

"Yet if King could see America now, I believe that he would be disappointed, and feel that his work was nowhere near done. He dreamed of a nation in which his children "will not be judged by the color of their skin but by the content of their character." But what we actually became is a nation that judges people not by the color of their skin -- or at least not as much as in the past -- but by the size of their paychecks."

In fact, we have become a nation divided by income and wealth opportunities, even more than ethnicity or race. In fact, if current rates of national population change trend as they have for the past 20 years, by 2035, (non-Hispanic) whites will be outnumbered by minorities, say demographers. In fact, Hawaii, California, New Mexico, and Texas already have minority non-Hispanic white populations. And that can only mean they will be in a position to fight for a larger share of the wealth, such as higher minimum wage, in spite of the vested interests who oppose it.

What is true economic justice and a living wage should be the question for US, and the answer is just as obvious. It is the wage that enables a family to support itself and give their children the chance to succeed.