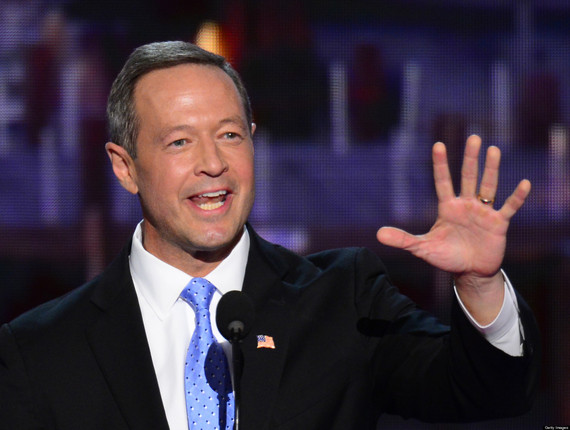 A paradigm shift is needed in today's Democratic Party.

Rising stars in the Democratic Party like Tim Kaine, Jim Webb and especially Martin O'Malley and Elizabeth Warren are all formidable candidates, despite the fact that one liberal icon has amassed $328,755,858 and owns her own server. If Republicans can be proud of the fact that Ted Cruz would "most likely" be able to serve as president, Democrats should trumpet the plethora of talent within their ranks. The truth is that presidential elections are decided by electoral votes, not the soap opera we'll all witness for the next 593 days. To win the White House a candidate needs 270 electoral votes; far fewer than the 332 votes Obama won in 2012 to beat Romney. Martin O'Malley and Elizabeth Warren can defeat anyone Republicans have to offer in 2016, primarily because they possess ideas and attributes that resonate with the majority of Americans.

First, let's analyze how President Obama was able to rout the Romney campaign in 2012. In an article for The Wall Street Journal just days before the election, Karl Rove made the following observations about America's political landscape:

It comes down to numbers...

In addition to the data, the anecdotal and intangible evidence--from crowd sizes to each side's closing arguments--give the sense that the odds favor Mr. Romney. They do. My prediction: Sometime after the cock crows on the morning of Nov. 7, Mitt Romney will be declared America's 45th president. Let's call it 51%-48%, with Mr. Romney carrying at least 279 Electoral College votes, probably more.

Why are Rove's words important for Democrats in 2016? Romney won only 206 Electoral College votes for several reasons. The numbers and especially the "anecdotal data" Rove referenced didn't reflect the damage done by Romney's 47% statement. When a wealthy Republican candidate states that 47% of Americans are "dependent upon government" and "believe that they are victims," this might speak to conservatives, but it doesn't resonate with the average American. For Republicans, everything from Obamacare's death panels to Obama's birth certificate were grounds to usher in a new president in 2012, but the average voter in a presidential election doesn't go to CPAC conferences. Rove, like other Republicans, predicted a landslide for Romney primarily because conservative rhetoric might work for a room full of Romney donors, but this dialogue hurts the GOP in presidential elections.

Therefore, the hot button issues important to conservatives, like Scott Walker's ability to defeat unions, aren't enough to ensure that a state like Wisconsin won't go to a Democrat in 2016. According to The New York Times, Wisconsin went blue despite Paul Ryan being Romney's choice for Vice President:

Despite Mr. Ryan's Wisconsin pedigree, President Obama won the state by nearly six percentage points, thanks, at least in part, to support from labor unions and voters who approved of the auto industry bailout. A majority of voters in exit polls also blamed President George W. Bush, not Mr. Obama, for the economy's problems.

When Scott Walker flaunts his ability to confront unions and compares this talent to fighting ISIS, people like Karl Rove cite the "anecdotal evidence" of roaring conservative crowds to justify their predictions.

However, these prognostications ignore the fact that most Americans don't side with Republicans on key issues. Like Wisconsin, other battleground states that went to Obama can easily vote for a Democrat once again in 2016. According to Pew Research, "Nearly three-quarters of Americans (73%) say there should be a way for people in the United States illegally to remain in this country if they meet certain requirements." In addition, 51% of Americans support labor unions, most Americans believe in global warming, 73% of Americans favored increasing the minimum wage in 2014, and 52% of Americans support same-sex marriages. On almost all of these issues, Scott Walker and Ted Cruz don't side with the majority of Americans. As for Rand Paul and Jeb Bush, some of the mainstream values they espouse (immigration reform) are overshadowed by extremely conservative policies on the economy, wealth inequality, climate change, and issues like the minimum wage. Conversely, all the Democratic candidates in 2016 (not just Wall Street Republican's dark secret) hold views that resonate with most voters.

Therefore, Wisconsin went blue and Rove had to eat his words for the same reasons that rising Democratic stars like Martin O'Malley and Senator Elizabeth Warren can beat any GOP challenger. In O'Malley's case, The Daily Iowan has likened the former Maryland Governor to JFK:

He packs the executive leadership often craved by presidential voters: eight years at the helm of Maryland government and before that as mayor of Baltimore, where, supporters say, he reversed the Eastern industrial city's decline.

O'Malley has the ability to captivate the nation and rise from a relatively unknown to a political juggernaut as John F. Kennedy did in the 1960s, more than 50 interviews with The Daily Iowan show.

...O'Malley has slowly but surely chipped away at Rodham Clinton's political gravitational pull, climbing from a inadequate public speaker to prime presidential product, should he announce a Democratic run.

Would anyone on the planet compare Scott Walker or Ted Cruz to JFK? Also, it's important to note that Governor O'Malley has focused on the economy, job creation, wealth inequality, and other important topics; not just pandering to an extreme end of his political party like Ted Cruz.

As for Elizabeth Warren, don't be so certain she won't run in 2016. An article by Anna Galland in The Boston Globe titled Elizabeth Warren, run for the White House explains why Democrats and the nation would benefit for the Massachusetts Senator running in 2016:

Put simply, this moment was made for Elizabeth Warren. With income inequality at its highest level on record, and corporations and lobbyists wielding enormous power in Washington and state capitals around the country, we need a president who is firmly grounded in making government work for regular people. Senator Warren has spent her career taking on corporate interests and winning historic financial protections for workers and small businesses. She's not only been critical of lobbyists and powerful financial firms, but has even taken on President Obama on occasion.

In addition, Galland states that there's a reason Move.on.org launched Run, Warren, Run: this moment in U.S. history "was made for Elizabeth Warren." From reinstating Glass Steagall to protecting the average American from another 2008 financial collapse, Elizabeth Warren is one of the few Democratic voices loud enough to confront Paul Ryan Republicans and Wall Street. She embodies the spirit of the Democratic Party, battling both President Obama and Republicans on last year's spending bill.

America in 2016 will be the same America that voted twice for Obama through electoral maps dominated by blue ink. Martin O'Malley and Elizabeth Warren, in addition to others like Kaine and Webb, can beat any GOP challenger simply because on key issues, they speak to the most people. Democrats don't need to pin their hopes on one candidate; we have a plethora of talent and should trumpet our candidates like the GOP flaunts its challengers. Like 2008, Hillary Clinton could be overshadowed by a newcomer named O'Malley or a courageous woman named Warren. If this happens, both Democrats and the average American will win big in 2016.