Democratic presidential candidate Martin O'Malley didn't mince words in the wake of the massacre of nine people at a historic black church in Charleston.

"I'm pissed," the former Maryland governor said in a Friday email to supporters, in which he derided Congress for its inability to pass tighter gun control measures.

“I’m pissed that after an unthinkable tragedy like the one in South Carolina yesterday, instead of jumping to act, we sit back and wait for the appropriate moment to say what we’re all thinking: that this is not the America we want to be living in,” O'Malley wrote. 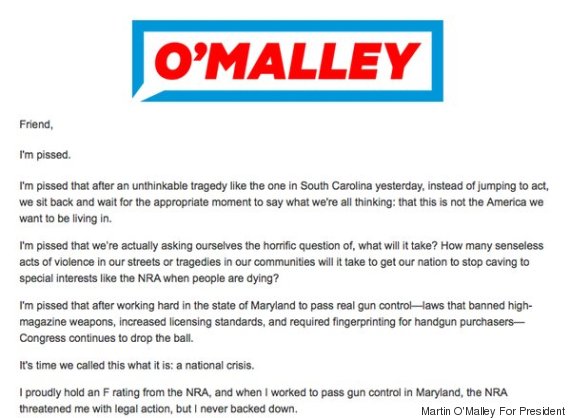 The presidential candidate criticized Congress for continuing to "drop the ball" and called for an end to "caving" to the National Rifle Association.

"I proudly hold an F rating from the NRA," O'Malley wrote.

NRA board member Charles L. Cotton recently argued that state Sen. Clementa Pinckney (D) -- among the nine people killed Wednesday by accused shooter Dylann Roof, 21 -- was to blame for the deaths because he did not support legislation that would have allowed concealed carry in churches. Cotton wrote that the victims “might be alive if he had expressly allowed members to carry handguns.”

O'Malley posted an almost identical message to Facebook, though he called more directly for an assault weapons ban.

"We have to act. We have to do more. That's why we must take a look at additional steps we can implement: a national assault weapons ban, strengthening background checks, and reducing straw buying through efforts like fingerprinting requirements for handgun purchasers," O'Malley wrote.

As The New York Times notes, O’Malley is the only candidate so far to call for reinstating an assault weapons ban.