Tennis legend Martina Navratilova arrives at the offices of The Huffington Post looking relaxed and fit in a kaleidoscope-print black-and-white blouse, slim jeans and silver Louis Vuitton sneakers, her long-haired dachshund Lulu in tow. "The first few days [of the U.S. Open] I was wearing high-heeled shoes and then I realized [the cameras] never show your feet –- so I switched to flip flops because it was so hot," she laughed. On this cooler Monday morning, she made do with sneakers.

They are an appropriate accessory for the newest AARP Fitness Ambassador. Navratilova, 55, has won 18 singles titles, 31 women’s doubles titles, and 10 mixed doubles titles. As her fans know, tennis was Navratilova's ticket out of Soviet-controlled Czechoslovakia; she defected at the U.S. Open in 1975, at age 18. She is a book author, gay rights activist and former Dancing With The Stars competitor, and is happily partnered with Russian model Julia Lemigova, who has two children (Navratilova has referred to them as her "instantaneous family"). She spoke with The Huffington Post in New York.

Serena Williams scored her fourth title at Flushing Meadows this weekend and her 15th Grand Slam at age 30 -- putting her three away from your singles record. You were also the last thirty-something player to win the U.S. Open.

Well she’s starting to catch me and it’s not making me happy. But she deserved it. She was two points from losing the match yesterday and she ends up winning. I thought [Victoria] Azarenka got nervous, she missed some shots that she shouldn’t have missed. Any time she had a chance to get up and take charge she couldn’t do it. Serena did great.

Do you remember having nerves at the Open?

Of course, everyone gets nervous. It’s just who can handle it better and manage it. You have to just really concentrate on what you are doing: "OK to win this game I need to win this point, to win this point ... I need to serve that way or toss the ball higher..." During the process of being in that moment the nerves go away. You totally break it down and at the end it’s just about the ball. You have to block it out.

Is there a parallel between that and trying to stay fit after 50?

Well of course there’s a parallel between that and everything we do really –- because you get overwhelmed with stuff. So prioritize: Right now I need to do this, right now I need to hydrate -- so you’re not thinking about 20,000 things.

What is your fitness regime?

I don’t have one at all because I travel so much. I do whatever I can. This week I’ll play tennis more than I normally do. I’ll do some running with the dogs, ride a bike; if I go to gym it’s usually for cardio. I don’t do weights as much; every once in while I throw in some pushups and do leg exercises to strengthen my legs. When I’m in Aspen I ski or snowboard or play hockey though I haven’t done that for a year because I’ve been in Paris, where my girlfriend lives. It’s catch as catch can. But variety is what I would recommend: As variety is the spice of life in food, so it is in exercise. Change it up. But most of all, don’t overdo it. ... You have to really ease into whatever exercise you do.

Tell me about your breast cancer diagnosis in 2010 and how that changed your life.

It reinforced my philosophy, which is always to kind of "seize the day" and get the most out of what I have at the moment. It makes you take stock, of course: Are you doing what you want to be doing? Are you where you want to be for the rest of your life? It’s kind of a forced midlife crisis, I guess. I didn’t change anything because I liked where I was and what I was doing. But it’s a shock to system, and it makes you realize what a crapshoot it all is. I did go to the grocery store and stock up on all things organic immediately –- even though now the reports are that it doesn’t make that much of a difference. I still buy it.

I had it easy compared to most people who are diagnosed because all I had to do was radiation -– which did knock me on my ass too, but I was able to play tennis and work through it. And the lumpectomy was just a simple surgical procedure and I was fine the next day. What did come through for me is how strong the women were; when I was going to get my radiation treatment in Paris, the women there were just so nice and the strength that was emanating from them was very empowering.

What is the riskiest thing you've done in your life since you've turned 50?

This TV show called “I’m A Celebrity ... Get Me Out of Here” which included jumping out of an airplane -- which I didn’t know I was going to do until five minutes before we did it. I would again if there was an opportunity to ... I loved the free fall. It's terrifying but it’s exhilarating at the same time.

And the other risky thing which wasn’t supposed to be risky -- I was trying to climb Kilimanjaro for a charity and almost died on the mountain. But I didn’t know I could have died so I wasn’t nervous about it. I only found out after the fact that I could have died and I was like, "Oh shit." But you don’t know you’re in danger so you’re not stressing about it. That’s again [an example of] how much the mind plays on our body. When I was diagnosed with breast cancer, the next day I was trying to playing hockey and I had to stop –- I had no energy. I was wasted, absolutely exhausted, which shows how much your mind controls you, and how much stress wears you out.

What is the best advice anyone ever gave you?

I think the one that really strikes me the most was Katharine Hepburn saying, "It’s not what you do in life, it’s what you finish." In the meantime, I’m having a hard time finishing a book at the moment. (laughs) ... I also think too many people equate money with success and one has nothing to do with the other. When you make a lot of money it just means you made a lot of money. It doesn’t make you a better person. Playing tennis, I didn’t tie in my self-worth into winning or losing matches.

So what do you judge your worth on?

Just how I am –- how I am with others, how I affect people around me; how you treat others, your value, your character.

What social or political cause are you most passionate about?

I’ve been active in animal rights and all kinds of environmental stuff and children’s charities over the years. But right now what's affecting me a lot personally -- and is relevant to a lot of people -- is gay marriage and gay rights.

Are you encouraged by the progress that has been made?

Absolutely, it's moving in the right direction but there are some people trying to stall that effort. Now that we’re so close, it really becomes something you don’t want to let go of. You don’t want to go backwards.

What is your greatest accomplishment?

I think it’s transcending sports, and affecting people outside of sports in a positive way, whether by leaving an oppressive country, or coming out long before it was a popular thing to do –- more than 30 years ago. So I think leading by example. 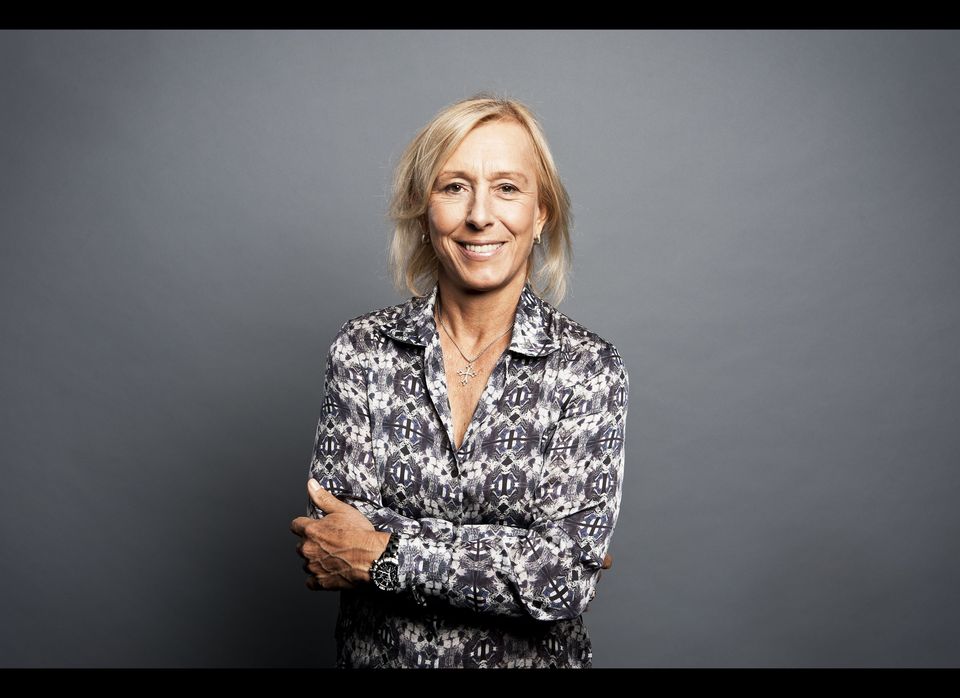