BRIDGEHAMPTON, New York -- To reach Martos Gallery's third and final summer pop-up exhibition at an obliging collector's humble Hamptons house, visitors will most likely pass an enormous mansion whose front yard boasts monumental sculptures by Richard Serra and Mark di Suvero. By contrast, entering 112 Sagaponack Road -- through a gate whose handwritten sign asks that you please close it behind you -- you will pass under a tree from which the artist Virginia Overton has rigged a hanging chunk of tree trunk. "Untitled (Tree with Log #1)" (all works 2012 unless otherwise noted) sets the tone for the playful installation beyond; this is a hipper type of Hamptons exhibition. 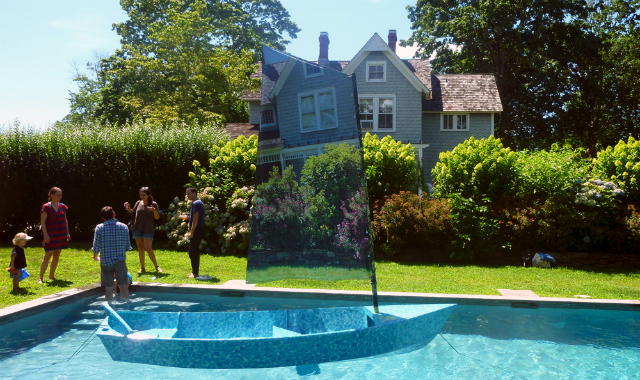 Beginning with its title, "Creature From the Blue Lagoon" (through September 3), curator Bob Nickas's show -- a follow-up to last summer's one-off parody "The 2011 Bridgehampton Biennial" and 2010's "Wait For Me at the Bottom of the Pool" -- asserts its self-deflating sense of irony early and often. Before even reaching the house, where most of the show's 150-something pieces are installed, guests pass B. Wurtz's Duchampian stack of sieves "Unkind Birdbath," a constellation of rocks adorned with pornography by Aura Rosenberg at the base of a tree, and a pink tent by Servane Mary silkscreened with jewelry, cosmetics, and other tokens of femnine acoutrement like a next-wave feminist update of Tracey Emin's "Everyone I Have Ever Slept With" tent.

In the backyard things get wilder still. Josh Tonsfeldt has attached a Tyvek banner printed with a nearly life-sized image of a giraffe to a tree for a startling surprise, Andra Ursuta's comparatively tiny but similarly inconspicuous concrete sculpture boasts of being "A Worm's Dream Home," and Mary has filled the single-car garage (how un-Hamptons!) with life-sized photos of Catwoman silkscreened onto plexiglas mirrors. By the pool, Johanna Jackson's still-life knitwear "Fruit Bowl" hangs ominously in a low tree branch, and John Miller's "Side Board" consists of a surfer manequin's top half balancing a boogie board and its upended lower half on its bewigged head. Aaron Suggs revisited his floating sailboat sculpture "Untitled (Camouflage Dinghy)" (2011-12), wrapping it in photos of its surroundings so that, from the right angle, it might just blend right into the backdrop.

Many of the artworks inside the house dissolve into the funky and very lived-in surroundings far more effortlessly than Suggs's ship, foremost among them Davina Semo's stainless steel triangle embedded low in the hallway wall on the second floor, "AFTER EVERYONE LEFT, SHE FOUND HERSELF ALONE IN THE ROOM," and Wurtz's dozens of colorful aluminum pan paintings hanging in the kitchen. Other stand-out works in the house include Nancy Shaver's free-standing sculpture "Daisy" (2011) -- peeling layers of upholstery and house paint serving as a memorial to convential notions of domesticity and feminity not unlike Servane Mary's tent -- Mary Heilmann's tectonic bas relief of glazed ceramic-on-neon red wood "San Andreas," and Nathaniel Robinson's "Weather," a giant blue cube topped with a topographic rendering of a hurricane.

Countless other creatures and micro-climates await houseguests at the "Blue Lagoon." And while the emerging artist-dominated show's pricelist remains firmly within the conventional Chelsea-Hamptons price range -- between $600 and $150,000 (though most works are tagged with the four- and five-digit figures) -- the atmosphere is more pool party than sales pitch.

"Creature from the Blue Lagoon" continues at Martos Gallery's summer location, 112 Sagaponack Road, Bridgehampton, through September 3. To see works from the exhibition, click the slide show.

The Louvre's Islamic Galleries, A Mix of I.M. Pei and Magic Carpet, Get Set for Fall Debut

One-Line Reviews: Our Staff's Pithy Takes on "Beasts of Revelation," "Post-Op," And Other Summer Exhibitions

ARTINFO Reviews 10 Major Museum iPad Apps That You Can Download