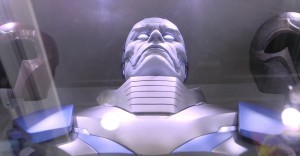 Most Marvel fans aren't too happy with the images of Apocalypse - Marvel's arguably most strongest and scariest mutant seems to be lacking the scare factors most fans are used to. This week on AOL BUILD, the cast will be coming in studio to talk about the the anticipated film which will be following the success of 'Captain America: Civil War'. Below are some photos of famed costume designer Jose Fernandez and his rendition of Apocalypse. It looks eerily similar to the the super villain we all know and fear.

Thanks to the awesome writers at Comic Book Resources for the information and images, here's the complete story.

Ironhead Studio -- the costume design company headed by superhero movie artist extraordinaire Jose Fernandez -- stopped by Monsterpalooza 2016, in the company's first-ever convention appearance, to discuss the various helmets and suits they've made, in addition to showing off an unused Apocalypse design that successfully rips the character right from the comics.

Fernandez created the unused Oscar Isaac Apocalypse mold, after another studio was ultimately chosen for the design, as a personal challenge.

Fernandez discussed his work in the superhero movie industry with Tested, reflecting on his earliest professional work, with his design for the "Batman Returns" Catwoman costume, to his most recent projects, like "Captain America: Civil War" and "Batman v Superman."

After reimagining the Catwoman costume, Fernandez went on to work on the various movie batsuits -- eventually going on to design Christian Bale's cowl, which was the first to allow a Batman actor to turn their head.

Check out a few of Fernandez's costume designs for "Batman v Superman's" trinity, "Tron: Legacy" and "G.I. Joe," along with his various helmets for Black Panther, Loki, Thor, Daredevil, Thanos and Captain America, below: