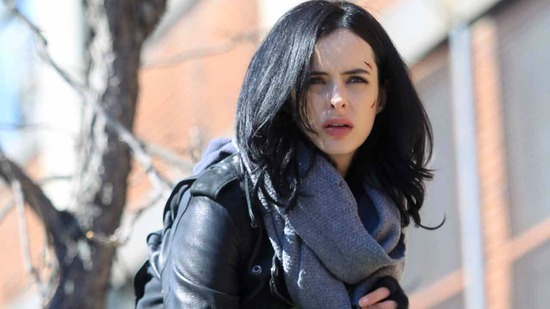 After viewing the first seven of its 13 episodes, I have determined that what makes Marvel's latest comic book-based project so super is how un-super its lead character is. Sure, the hero of Netflix's Jessica Jones has incredible strength and can leap amazing heights, but instead of donning a mask and cape, she is a hard-drinking, acerbic private eye with a messy life and traumatic past.

And with Krysten Ritter in the lead role of the series, debuting Friday on the streaming service, Jessica Jones is not just a good comic book adaptation, it is great noir crime drama. Not afraid to have a sexually aware female protagonist -- and not too squeamish to address topics such as sexual violence, abortion, and PTSD -- it is the most mature live-action storytelling from Marvel. It also happens to be widely accessible for adult viewers who are not typically fans of the spandex-clad avenging sort.

Based on the acclaimed 2001-04 super hero/crime comic Alias by Brian Michael Bendis, the show, created by Melissa Rosenberg, revolves around private detective Jessica Jones of Alias Investigations (Ritter). Like many comic heroes, she is an orphan, and has superhuman strength. She also has an archnemesis in the disturbingly charismatic Kilgrave (Doctor Who's David Tennant) who has mind control powers.

But that's where the standard comic book setup pretty much ends. Rather than vanquishing thugs in a brightly-colored costume, Jessica takes photos of cheating spouses. In her spare time, she creeps on bar-owner Luke Cage (Mike Colter), who has his own secret origin. Meanwhile, Kilgrave is not so much attempting to rule the world through over the top crimes, but lives a life of leisure and creates a trail of human suffering by forcing people to do his bidding. This includes causing people to kill for him, commit suicide, and become victims of sexual assault.

As is revealed, Jessica was once under Kilgrave's influence, and suffers PTSD as a result. But when a case comes across her door, she re-enters the world of this sicko to hunt him down and help others he victimized. And things get very dark; not "dark" in the Christopher Nolan Dark Knight Trilogy "gritty realism" way, but instead far more messed up.

Yet Jessica Jones is set in the same Marvel Cinematic Universe as The Avengers, Agents of S.H.I.E.L.D., and last spring's excellent Netflix series Daredevil. The latter marked a departure from the relatively bright and shiny MCU; it was violent and visceral, and focused on a street-level hero fighting organized crime in New York City. Still, though not about alien invasions, Asgardian gods of mischief, or evil robots, Daredevil nonetheless became a super hero show toward its first-season finale.

Not that that's a bad thing. I have enjoyed Marvel's embrace of its colorful, fantastical characters who fly with a magical hammer, fire repulsor rays, smash through buildings, shrink to an ant's size, and fling a red-white-and-blue shield. Those shouldn't, nor will they, go away. But there are deeper nuanced stories that can be drawn from Marvel's history.

That's where Jessica Jones excels. While there are certainly a few call outs to the larger events in the MCU, Rosenberg crafts a series that is grounded despite having a hero who can literally leap onto (maybe not over) a tall building in a single bound. The super powers are an accent, not the focus. It feels like Stan Lee meets Stieg Larsson, and elevates the Marvel model as a result.

Along with Rosenberg, no small praise can be heaped upon Krysten Ritter for delivering the most fully-realized female character we've seen onscreen based on a comic book - and one of the best, period. Though she has been victimized, she does not let the trauma define her. She becomes sexually involved with a man, but her choices don't revolve around him. Her relationship with best friend Trish Walker (Rachael Taylor) and boss Jeri Hogarth (Carrie-Anne Moss) is authentic, and their conversations don't involve a man - except maybe Kilgrave. She also swears and drinks like a sailor, and basically kicks a lot of butt. Robert Downey, Jr.'s Tony Stark has heretofore been the "bad boy" of the MCU, but Ritter's Jessica is the bad ass. Plus, it's refreshing to have a hero who is a brawler, and not a trained ninja.

David Tennant likewise deserves notice as Marvel's first truly terrifying villain onscreen. Vincent D'Onofrio posed an authentic threat as Wilson Fisk in Daredevil, and set a new high bar, but Tennant's Kilgrave is suave, charismatic, and utterly insane. Without going too far over-the-top with his performance, he makes the skin crawl and intensely creepy. Meanwhile, Mike Colter, who is getting his own series as Luke Cage (before he, Jessica Jones, Daredevil, Iron Fist - and hopefully Jon Bernthal's Punisher team up in Netflix's The Defenders) makes an immediate impact as a guy with a past and some mysteries of his own. Colter's Cage appears stable, in control, and maybe not a man of many words - initially. He ends up playing more of a role in Jessica's life, and is a match for the private eye.

The Marvel era of movies, and the current super hero craze, was ushered in in 2008 with Iron Man, and continued with The Incredible Hulk, Thor, Captain America, and The Avengers. They proved that, as opposed to the ultra-realism of Nolan's Batman films, they could pull in an audience by honoring their roots and not being embarrassed by big, colorful comic book stories.

Now, with Jessica Jones, Marvel and Netflix have proven there is rich material to mine by honoring the more adult-themed comic book stories in their canon. And the result is a series that should land with both fans of the source material, and those who aren't even into comic books or super heroes. Simply put,Jessica Jones is one of the best things to come out of the "House of Ideas," and one of the best shows of the year.