In the tiny town of Nyack, in the shadows of the Tappan Zee Bridge, the Rockland County Jazz and Blues Society and the Nyack Library once again provide a superlative matching of two local jazz musicians as part of their Carnegie Concert series. This evening the series brought together trumpeter Marvin Stamm and pianist composer Mike Holober. 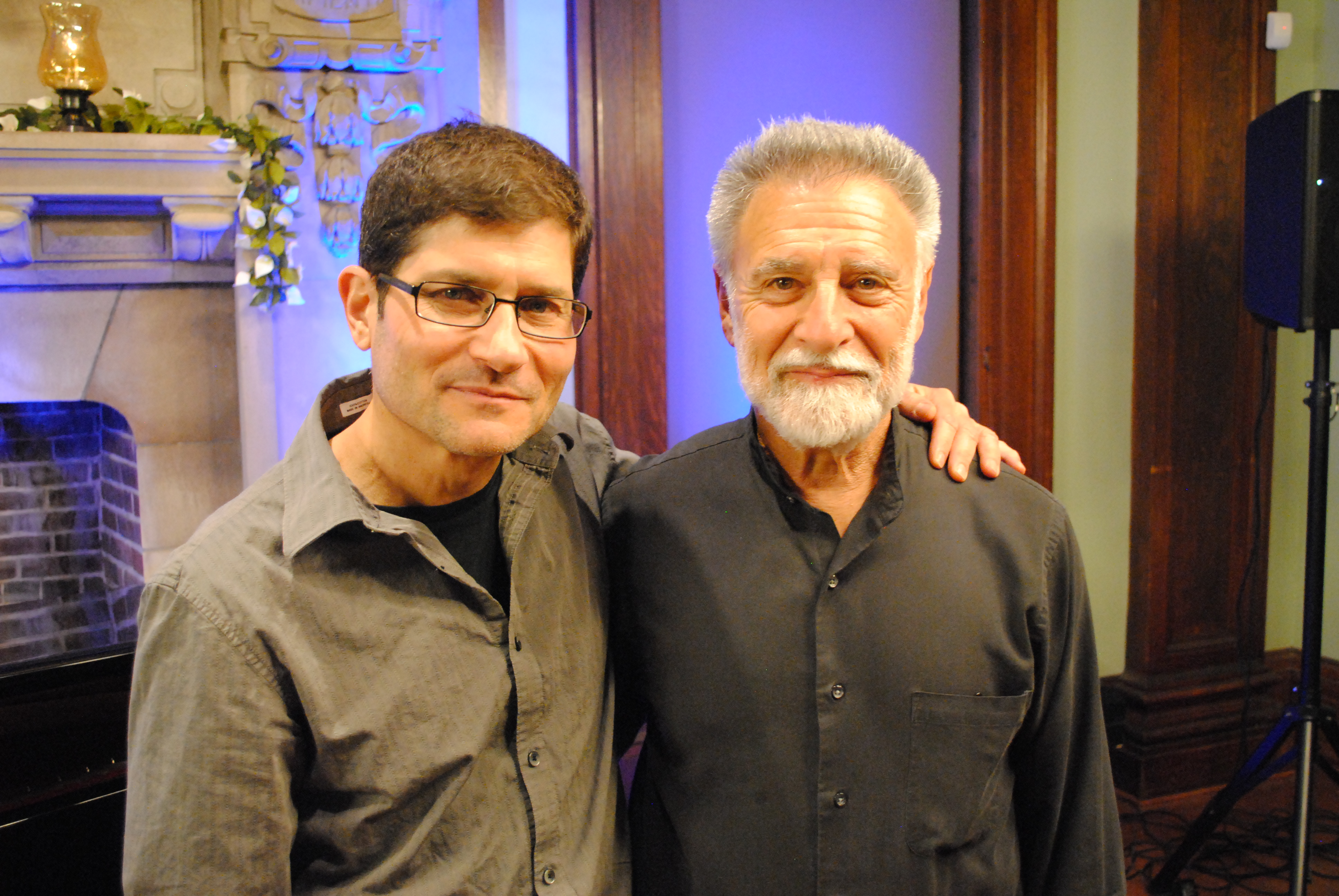 For those who don't know these two fine musicians the evening offered an intimate opportunity to witness first hand just how accomplished these artists are. Mr. Stamm, dressed in a dapper white suit and a black band collared shirt, was the picture of hip style. His brush cut grey/white hair with matching full tightly trimmed beard finished the image of a confident, seasoned performer.

His past includes stints with Stan Kenton and Woody Herman orchestras as well as the Thad Jones/Mel Lewis Big Band and a continued association with the George Gruntz Concert Jazz Band and The Westchester Jazz Orchestra. He has performed in multiple duo and trio settings with longtime collaborator pianist Bill Mays and has been a standout, first call studio musician for many years. I first saw Mr. Stamm in a little, now defunct jazz club in Hackensack, N.J. back in the early seventies where he was a featured soloist with the house band of Billy LaVorgna on drums and Derek Smith on piano. His performance mesmerized me back than and I have always found his playing to be exemplary. 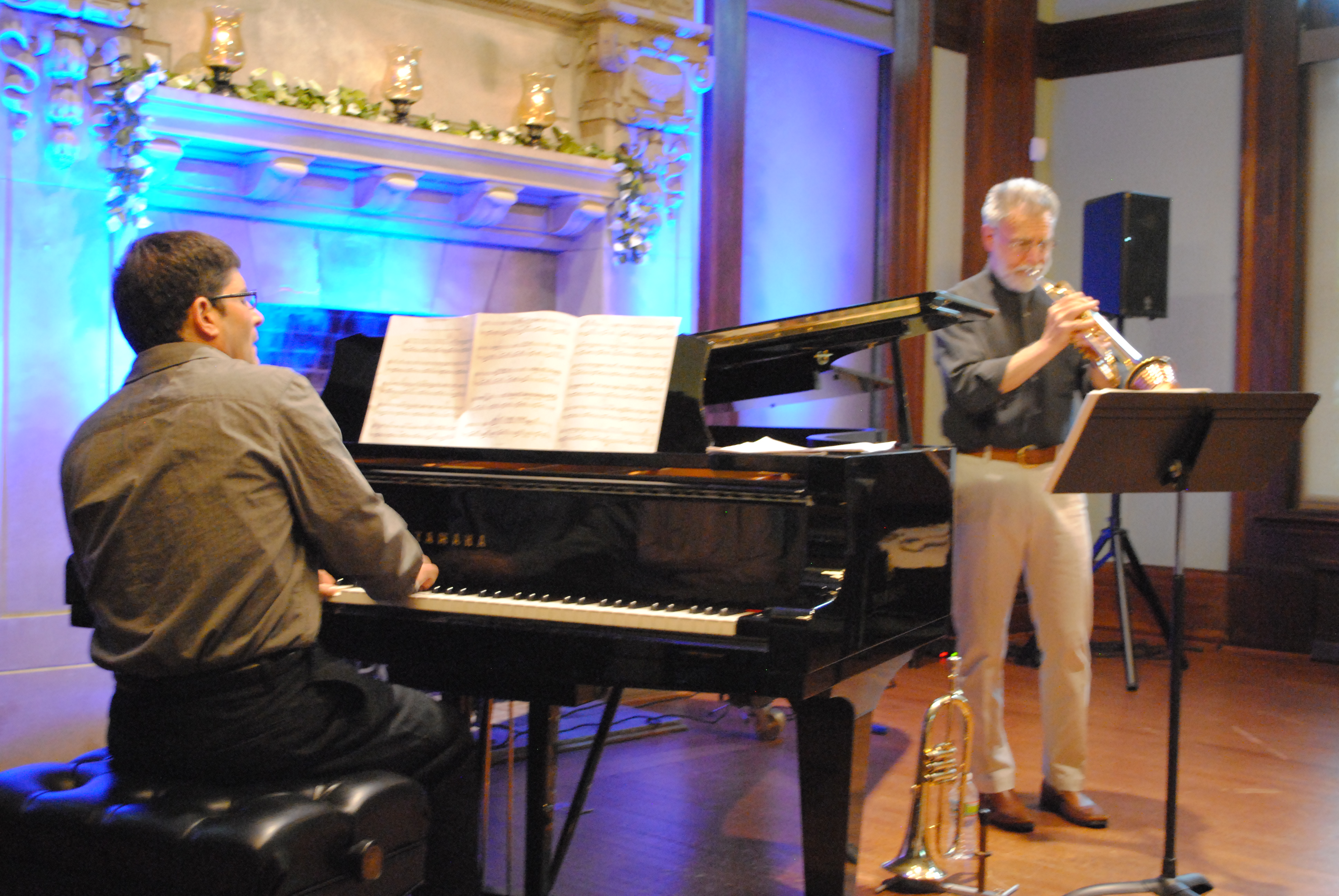 Mr. Holober is a classically trained pianist and a ubiquitous musician who has performed with many notable artists both as a pianist and as a leader/ composer / arranger. In recent years he has released music with his own quintet as well as with the seventeen piece Gotham Jazz Orchestra. I first saw Mr. Holober at a performance of the Westchester Jazz Orchestra where he is its musical director. His talents as a composer/arranger were on full display utilizing the various voices of this fine orchestra to great effect. This was my first time hearing Mr. Holober at the piano and he did not disappoint.

The evening performance started with Mr. Stamm respectfully asking for applause to be withheld until the end of each performance, so as to allow the continuity of each piece to be enjoyed uninterrupted.The first songs were a Cole Porter song "Everything I Love" followed by Mr. Holober's treatment of an Argentinian dance piece by Alberto Ginastra "Danza de Moza Donosa ." ( An interesting side note, Gianastra's music was the inspiration for Keith Emerson's "Toccata" on Emerson Lake and Palmer's Brain Salad Surgery from 1973.) The piece starts out slowly, Mr. Holober playing a sensitive intro, with Mr. Stamm joining on muted trumpet. You can immediately sense the ease of communication between these two, as Holober accompanies deftly and Mr. Stamm floats above with his warm sinuous lines. The happy Porter tune is played joyfully and with great relish before Mr. Holober leads into the more solemn Gianstra piece. Mr. Holober's classical training comes to the forefront on the evocative melody steeped in a deeply Spanish tradition. Mr. Stamm , whose obbligato part was composed by Mr. Holober, soars over the pianist's chording like a clarion call.

Mr. Stamm introduces the next piece he wrote titled "In a Rosey Tone" based on the changes of a Duke Ellington 1939 composition "In a Mellotone." After stating the melody the two have a marvelously swinging interchange of ideas where Mr. Stamm and Mr. Holober intuit each other's thoughts brilliantly.

Mr. Stamm is the consummate player; a trumpet player's trumpeter. His tone is rich and clear and he is not prone to hyperbole on the horn. He is a master technician who uses his horn with reserve and nuance in a complimentary way that works in perfect harmony with whomever he plays , in this case Mr. Holober's piano. This is no more evident than on Don Raye and Gene De Paul's classic "Star Eyes," where Mr. Stamm takes a brilliantly understated solo, cascading through cadenzas of notes, but allowing Mr. Holober's inventive, complex piano lines to take much of center stage during the performance. They use the rhythm pattern used by Charlie Parker's famous version of the song to set the stage.

The two bring out their romantic side with a piece by Michel Le Grand that Mr. Stamm admitted was probably the most difficult piece of the evening's performance, "Umbrellas of Cherbourg." The emotionally laden song was a tour de force, the perfect vehicle for Mr. Holober's delicate Evanesque touch and Mr. Stamm's precise but beautifully poignant tone.

Speaking of Evans, the duo ended the set with Bill Evans" Funkallero." The ostinato line was played in precise sync before Mr. Holober went into solo mode, dazzling the audience with his marvelously fluidity. The ideas flow from his hands in unpredictable ways that carry you like a traveler taking an eerily familiar but clearly unknown path. When Mr. Stamm joined the fray the two played like two synchronized birds in flight soaring to new heights in precise formation.

As chance would have it I sat next to a world-class percussionist, Dave Carey, a local resident who had once played with Mr. Stamm and Frank Sinatra. We both marveled at Mr. Stamm, who at 73 has such enduring proficiency on such a demanding instrument as the trumpet.

The second set started out with another Cole Porter tune this time "I Love You." Mr. Stamm took up flugelhorn on this one, and the warm, burnished tone he is able to get from the instrument draws you in as Mr. Holober accompanied him with beautiful chord voicings.

Antonio Carlos Jobim's "Camhinos Cruzados," which Mike has arranged for the Westchester Jazz Orchestra with Marvin in mind, was a floating, sensitive ballad featuring Marvin's flugelhorn. Mr. Stamm's horn hung in the air like a warm breeze, wafting over an oceanfront. Mr. Holober's swaying piano cast the alluring spell of a romantic getaway. He delicately danced over the entire keyboard with a skilled agility and grace.

After a beautiful improvisational duet on the Rogers and Hart tune "Have You Met Miss Jones," that seemed to start unexpectedly from Mr. Stamm, the duo did a piece by the famous corntetist Bix Beiderbecke's Modern Piano Suite titled "Flash" with Mr. Holober again writing the obbligato part for Mr. Stamm's trumpet. The song had elements of a sound that harkened to the '20s, and Mr. Holober and Mr. Stamm captured the feeling authentically, with Mr. Stamm employing his mute to great effect.

The finale was Mike Holober's composition titled "Moon in the Trees." The strikingly imaginative piece was played in a rubato style. Mr. Holober's piano voice is ebullient, with a dancing quality that makes it endlessly entertaining. Mr. Stamm once again took up his flugelhorn in delicate accompaniment to Mr. Holober's expressive piano.

It is apparent that these two musicians appreciate each other's artistry. In talking with Mr. Stamm between sets, he expressed a fondness for playing with Mr. Holober, a happy collaboration that hopefully will yield more beautiful music in the future.

You can see a live stream of the concert by linking below.