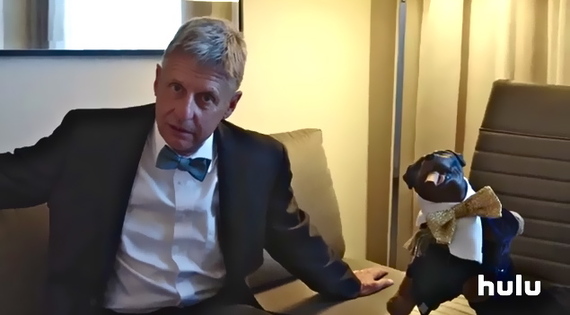 Updated Nov. 4 to include information about Hulu's release on Nov. 3 of a new Triumph election campaign special, the fifth of this year.

Brothers Groucho and Chico Marx, may they rest in peace, wasted little time with the party of the first part and the party of the second part, but there's no record of how they might have handled a third party.

So I'm voting for Gary Johnson. No, good lord, not for president of the United States; for Best Comedy Stooge of 2016.

All due respect, of course.

The unwitting contenders for this dubious honor pretty much boiled down to two men who served as state governors nearly 20 years ago: Johnson in New Mexico and Mike Huckabee in Arkansas. Both performed as themselves, separately, in segments of a series of political comedy specials carried this year on the Hulu.com streaming service. The star, anchor and propulsive force of the shows was Triumph the Insult Comic Dog, a trans-species descendant carrying on the Marx Brothers' family traditions.

Smigel first put Triumph to work scratching the underbelly of American politics during the 2004 presidential campaign and then again in 2008. He returned to politics this year with material recorded − sometimes guerilla-style − at a wide variety of campaign-related events and locations during primary season, the nominating conventions, the Clinton-Trump debates and more. Edited under intense time pressure and produced by Smigel and the team at Funny or Die, the specials were distributed by (and still available through) Hulu under the umbrella title "Triumph's Election Watch 2016." Some segments are also kicking around on YouTube.

On Thursday, Hulu released a new 30-minute Election Watch 2016 special subtitled "The Home Stretch" in which Triumph/Smigel set up Trump supporters and Clinton supporters in separate fake focus group sessions and Triumph and ditzy last-minute bettors roamed the gambling floor of the Trump Taj Mahal just before it ceased operations on Oct. 10.

(In a phone conversation Wednesday, Smigel confirmed that he and Triumph will be doing Election Night duty on Hulu, although he declined to divulge details.)

For consistency, conceptual ingenuity and flat-out funniness in or out of a politial context, no one surpasses the Smigel/Triumph comedy power couple. Consider, too, that Triumph's comedy invariably plays out in real-world encounters with real people who most certainly are aware they're talking with, listening to, and answering questions from a sharp-tongued, dog-faced hunk of rubber manipulated and voiced by Smigel just inches away. Yet these real people still manage to say and do incredibly foolish and funny things (some credit due for fine editing), and Triumph still manages to project an absolutely inexplicable touch of sweetness.

Huckabee turned up in the February Triumph special, just as his already enfeebled effort for the Republican nomination collapsed. Smigel/Triumph persuaded the former governor to let the dog coach him on how to be mean and insulting, the better to challenge the mean and insulting Donald Trump.

Huckabee "got" it and was game and enthusiastic, even as he absorbed considerable verbal punishment from Triumph. But Huckabee also drew a line. Stubbornly clinging to his identity as an aspiring presidential nominee and, well, real person, he waved off reading some of Smigel's more outrageous political jokes as "too rough" or "too much."

Johnson, on the other hand, didn't hesitate to set aside his public identity, such as it was, and readily embraced the idea of what amounted to playing Triumph's stooge in the special released early last month. In an interview segment, for example, Triumph tried to teach Johnson how to do a comic take to the camera. Johnson quickly picked it up and started doing on his own, often inappropriately.

And a remarkable later segment, recorded in September outside the L.A. theater hosting the prime-time Emmy Awards, brought comedy and politics together in surreal fashion. As Smigel/Triumph and his guest Johnson walked together along the red carpet, Triumph would introduce Johnson to different show-biz reporters working the event, giving Johnson a different name at each stopping point. Johnson was "Taylor Haskins," then "Stuart Mellman," then "Ben Monroe," then "Carl Aleppo." Triumph described him as an actor who would be appearing in an upcoming series, which also got changing titles.

None of the reporters showed any interest in Johnson by any name. Nor did they recognize him as the current nominee of the Libertarian Party for president. But Johnson happily played his role as Triumph's stooge with the shifting introductions, sometimes even offering details of the "show" in which he supposedly would be acting.

Then they got to Viviana Vigil, a reporter for a cable/syndicated show called "Celebrity Page." Pointing at Johnson, Smigel/Triumph told her that "Harry Hunsen" (Johnson) was going to be in new show called "Third Party." It's "a reality show about getting elected president of the United States," Johnson added.

Vigil ignored "Hunsen," but asked Triumph who he was going to vote for. Triumph said he "might go Libertarian, I don't know." Vigil's quick follow-up: "So you're gonna throw away your vote?" That got Johnson to interrupt the conversation: "I think throwing away your vote is voting for somebody that you don't believe in," he said. "And that's kind of what the reality show's all about."

And right there and then, in a 10-second exchange in an unrehearsed, real-life comedy bit in an online comedy show built around a profane, cigar-chewing, rubber hand puppet, Smigel captured the essential dispute over voting for third-party candidates in the 2016 presidential race.

Johnson was right − although he didn't mean it in this sense − that a third-party candidacy might as well be a reality show. Reality, as Viviana Vigil clearly understood, is that either Hillary Clinton or Donald Trump will be elected president on November 8.

It's the right of all properly registered citizens to vote if we want and as we choose. It is a personal choice. But it's not a purely personal act. It's not just a "me" exercise, something we do to make ourselves feel good about ourselves. It's more than that.

It's also an act of civic responsibility. It reflects the fundamental truth that no one exists in isolation, that we are all bound together, one way or another, with other people: our families and friends; neighbors and co-workers; billions of people all over the world we don't know and never will. And precisely because this is the United States of America, our collective votes will affect the lives of our fellow human beings everywhere else, in some cases profoundly.

So while we have the right to use our votes to "make a statement" or "register a protest" or "send a message," our responsibility is to choose the people we honestly believe will do the best job for everyone − all of us − while they're in office.

Maybe four years from now, enough people will have worked hard enough and smart enough to change the nominating process to produce choices more to our liking. But right now, if you feel you absolutely must publicly express your disgust with the only two choices we really have, here's a suggestion: Do it on your Facebook page where your friends can see that you're a principled person but where you won't hurt everyone else. And take a screen shot of it, just in case, to show your grandchildren if you want. Or, even easier, find a somebody else's post that you agree with and just click "Like."

Meanwhile, here in the real world of flawed systems, flawed procedures, flawed candidates and real consequences, it will be either Clinton or Trump on Nov. 8. Pick one.