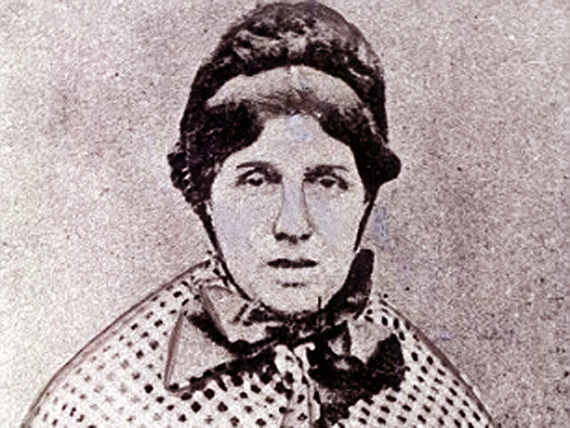 On March 24, 1873, Mary Ann Cotton was hanged for the murder of her fourth husband's son, Charles Edward Cotton. She was 40 years old, and would become known as Britain's first serial killer: In her wake she left up to 21 dead, including 11 of her 13 children, three of her four husbands, one lover, and her mother.

Born in 1832 to working class parents, Mary Ann likely had a difficult childhood. Her coal miner father fell to his death while she was young, forcing Mary Ann to enter the workforce and support her family. Mary Ann's mother remarried in 1843 to a man named George Stott. The adolescent did not get along with her new stepfather.

As a young woman, Mary Ann found work as a nurse, and soon sought a husband. This she accomplished in 1852 by marrying William Mowbry--a laborer like her father. Shortly thereafter, the many loved ones in Mary Ann's life began dying under mysterious circumstances.

While living in Plymouth, Denver, she and William had five children--four of whom died of gastric fever. The couple then moved to North East England where they had, and lost, three more children. Later, Mary Ann would struggle to remember just how many children she had (and lost) during this stage of her life.

The family worked hard to make ends meet. William found employment as a foreman at South Hetton Colliery, later as a fireman on a steam vessel. Then, in early 1865, he succumbed to an intestinal disorder just like his children before him. The newly widowed Mary Ann was left with one child--and an insurance payout on William's life equivalent to half a year's salary.

Her next husband was James Robinson, whose former wife had died and left him with an infant. He hired Mary Ann as a housekeeper in November 1866, only to see his young child die shortly thereafter. Devastated, he turned to Mary Ann for solace and the pair became a couple.

Mary Ann's new romance was interrupted when her mother became ill. Mary Ann traveled to give her care. Within nine days of her arrival, her mother had died, despite being previously on the mend.

Mary Ann returned to James with her daughter in tow, a child who had previously been living with Mary Ann's mother. By the end of April 1867, this daughter, as well as two of James' other children, were all dead.

Despite the shocking list of deaths, James married Mary Ann that summer. Their first child-- a daughter--was born in November. She became ill and died by March. Their second child, George, was born in June 1869.

By now, James had grown wary of his wife. When he found out that she had been forcing her stepchildren to pawn household items for cash, he kicked her out--retaining custody of young George and likely saving his son's life, as well as his own.

The last man to fall victim to Mary Ann's deadly trap was Frederick Cotton. With this family, Mary Ann managed to kill not only Frederick, but also Frederick's sister, the child Mary Ann bore with Frederick, and Frederick's child from a previous marriage, Charles Edward Cotton. A lover named Joseph Nattrass also died of stomach-related illness during this period. It was only after the death of young Charles that suspicion finally fell upon Mary Ann--after 20 years of mysterious deaths and probable killings.

Arsenic had been Mary Ann's weapon of choice, a deadly chemical used throughout the 19th century. The poison was easy to administer and, for the most part, readily accessible. Nevertheless, the question remains: How could so many deaths go unquestioned for so long?

High infant mortality rates, rudimentary record keeping, and substandard nutrition of the working poor all helped Mary Ann Cotton escape scrutiny. No doubt, Mary Ann also earned sympathy as a heartbroken mother and widow. Yet even she was unable to hide behind the black veil of grief indefinitely.

In March 1873, Mary Ann Cotton was put on trial. She was officially convicted of the murder of Charles Edward Cotton. The court of public opinion convicted her of many, many more. Her trial lasted all of three days, upon which Mary was sentenced to death by hanging.

Her execution did not go smoothly. The drop below the trap door was too short, leaving Mary Ann to jerk and twist at the end of her rope until she choked to death.