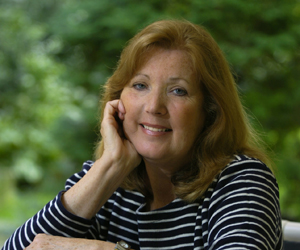 I'd never met Lt. Colonel Lisa Schieferstein, yet I found myself intrigued by her story. I knew Lisa was half a world away, doing a tough job in a gritty, remote location. As the garrison commander of the 389th "Renegades" division in Iraq, she was stationed at a desert outpost and had ninety soldiers under her command. The heat was appalling (115 degrees Fahrenheit), the conditions were rugged, and the danger was ever-present.

Even though my life is incredibly cushy by comparison (a nice psychology practice in Delaware, a second career as a mystery novelist) I knew right away that Lisa and I had something in common: a love of books. I saw a photo of Lisa--in full body armor--visiting a one-room Iraqi schoolhouse to bring books to the children.

We began to e-mail each other, and I had a little window into her daily life. When I learned that the 389th was a sustainment division, offering food and snacks to American convoys passing through, I decided to send boxes of books and homemade goodies every two weeks.

When Carolyn Hart (America's Agatha Christie) heard about the project, she made an interesting offer. "Let me send twenty pounds of coffee, snacks and books to celebrate the publication of Laughed 'Til He Died. It's the twentieth release in my Death on Demand series, and this would be a nice way to commemorate the event."

Nice? It was fabulous! A very generous offer, indeed. I was thrilled. Carolyn was as good as her word, immediately sending more than twenty pounds of goodies and books to the troops.

But it didn't stop there. We received such a positive response from the 389th Renegades that we kept on going. We had to! The soldiers said they loved these boxes from home. 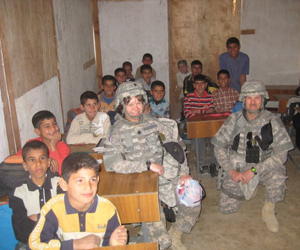 Carolyn confirmed, "When I packed the boxes for the remote garrison in Iraq, I pictured young Americans--and some not so young--far from home, beset by horrendous heat and dirt, lonely, tired, and always in danger. The boxes held so little, but they were sent with love to say, 'Thank you for all that you are and for all that you do. God Bless.' I sent candy, tuna fish, instant coffee, and books. I wished I could send safety and peace."

Other writers heard about the project and joined us. Kate Collins, J. B. Stanley, Julie Hyzy, Beth Ciotta, and Robin Burcell are just a few writers who donated autographed books and goodies. Jill Cesa-TenEyck, Lisa's best friend, insisted on sending a dozen copies of my own Penguin mystery, Dead Air, to the Renegades.

The numbers kept soaring. To date, we've sent more than 200 pounds of homemade goodies and books to Iraq. Yes, 200 pounds!

The generosity of my fellow writers is truly an inspiration to me. New York Times best-selling author Caridad Pineiro said, "As an immigrant to this country, I value the liberties in America every day. I try to regularly help our soldiers as they protect our nation. Whether it's sending books, candy or basic necessities, I know those small things mean the world to them."

What does the military think about the project? Kim Adams, SOS Military Liaison and an Air Force spouse in Honolulu, said, "As a veteran of the first Gulf War, I know first hand what difference mail makes to deployed personnel--actual snail mail since email and Skype were nonexistent. But the war was short term and our troops came home. Today, our military personnel are facing longer and repeated deployments. While email and Skye are available, nothing can replace the warmth of a personal letter, the excitement of a care package, and the thrill of receiving books hand selected by readers who support our deployed personnel."

I wish everyone reading this piece could adopt a soldier and send books, candy, snacks, and, of course, homemade goodies. It's easy to do and it really means the world to our brave men and women in the military forces. As Janet Evanovich said, "If Stephanie Plum could meet the Renegades, she'd give them a high-five and say, 'Well done!'"

Mary Kennedy is a clinical psychologist practicing on the East Coast and the author of the Talk Radio Mysteries. You can visit her at www.marykennedy.net and at Red Room, where you can read her blog.