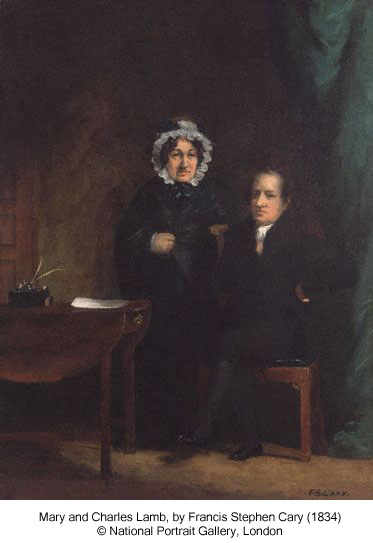 The Romantic essayist William Hazlitt described Mary Lamb as the most "reasonable woman" he ever knew. This choice of adjective -- reasonable -- is not the first thing that comes to mind when I think of Mary Lamb. Interesting, perhaps, or articulate, or even brilliant, but reasonable seems an odd choice to describe a woman who, in a "fit of mania," killed her mother with a kitchen knife.

It was September of 1796, and Mary was in the kitchen with her family while dinner was being prepared. Apparently unprovoked, she "seized a case knife laying on the table, and in a menacing manner pursued a little girl, her apprentice, round the room." Her "helpless infirm mother" cried out for her to stop, but then Mary "renounced her first object, and with loud shrieks approached her parent," stabbing her through the heart. The Morning Chronicle reported that at the inquisition, "the Jury of course brought in their Verdict, Lunacy," and Mary Lamb was committed to the Islington asylum.

Barely six weeks after the murder, she was released to the care of her younger brother Charles, who cared for her until his death nearly 40 years later. Mary lived for nearly 15 years longer, and I wonder how she, who was previously "ever affectionate" towards her mother, coped for over half of a century -- most of her life -- with the trauma of having killed her mother in a fit of madness.

It was clearly weighing on her mind in 1803. In this letter, written to Sarah Stoddart the day before the seventh anniversary of her mother's death, Mary talks at length about her "dear Mother," who is "always in my poor head and heart." She doesn't explicitly mention the stabbing, but she melancholically recalls her mother as "a perfect gentlewoman." 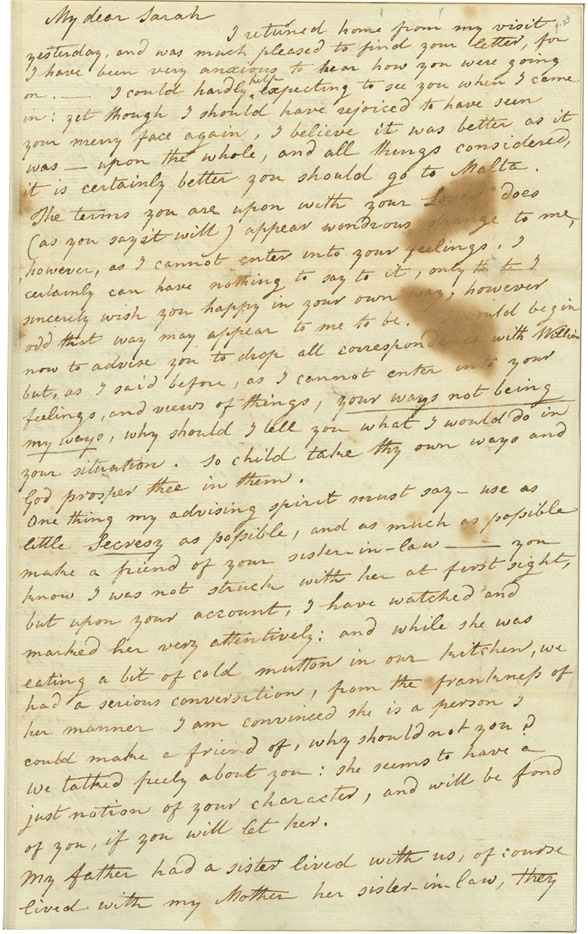 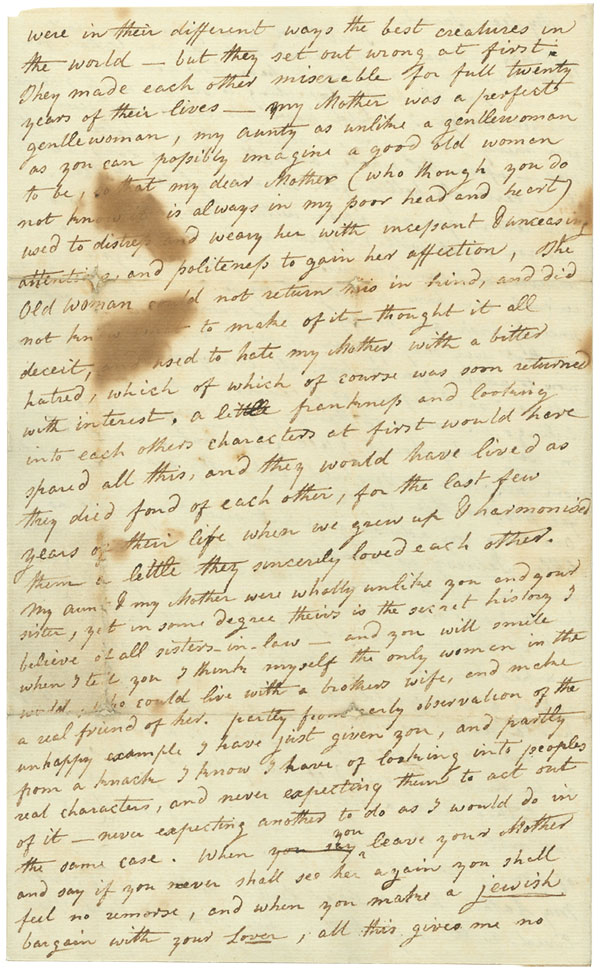 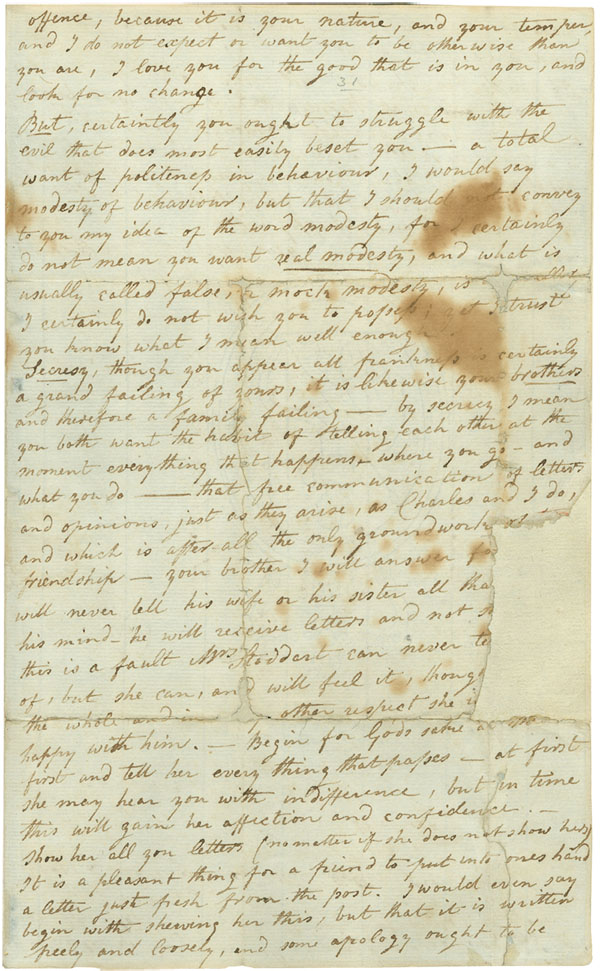 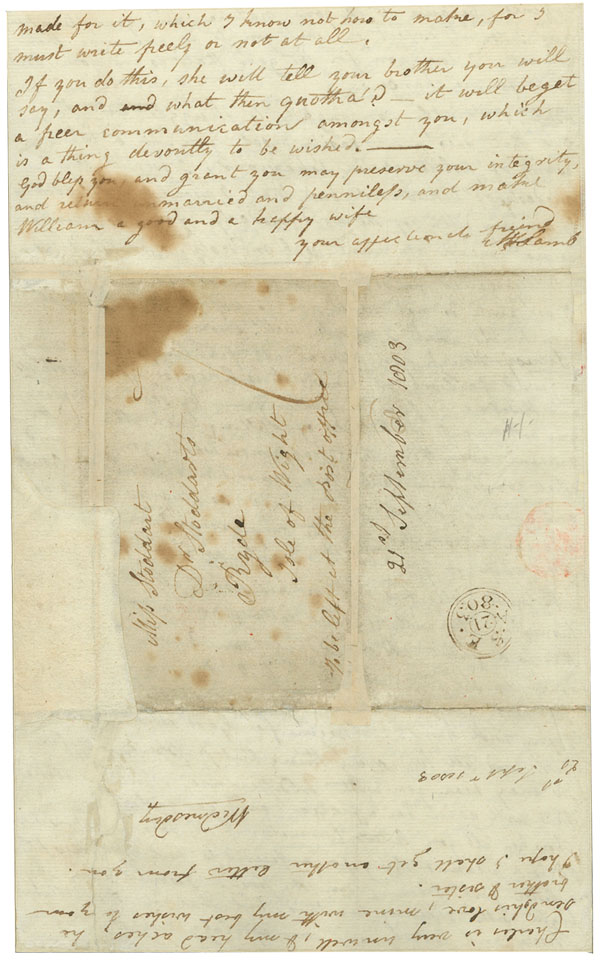 Near the anniversary again two years later, Mary is doing relatively well and is able to report, "I have been for these few days past in rather better spirits, so that I begin almost to feel myself once more a living creature." Mary's illness, which would possibly be identified as bipolar disorder today, reemerged throughout her life as periodic fits of "insanity," and she spent increasing amounts of time in private asylums as she aged. In other letters, Mary references her illness and institutionalization (which she calls "her banishment"), describing periods of "sad and heavy times" when she will frequently "fall a-crying." She also worries about the "trouble" she causes her friends, and muses on the repercussions of mental illness -- she says: "I speak from experience, and from the opportunity I have had of much observation in such cases, that insane people, in the fancy's they take into their head, do not feel... the perception of having done wrong."

Mary Lamb was singularly fortunate to have had a brother who was willing to take responsibility for her -- the rest of the family circle thought she should remain institutionalized from the start. And this, a madhouse at the turn of the 19th century, is not a place I would want to see a sister treated for "lunacy" for the rest of her life. We can't know what her life would have been had she been completely abandoned by her family, but without her brother's care it is unlikely that she would have been able to live as fully as she did. Through him, she cultivated friendships with Wordsworth, Coleridge, Mary Shelley and other famous Romantics, and was a writer herself -- penning the well-received Tales from Shakespeare, Designed for the Use of Young Persons and other works.

For more information about this letter and the rest of the Morgan's collection of Charles and Mary Lamb manuscripts, click here.