She is truly the Internet's most analytical historian.

It's easy to proclaim that change is in the air, but the thing about Mary Meeker is that she makes the pace and the acceleration of change so darn tangible. Starting back in the olden days of 1995, Meeker published The Internet Report while a research analyst at Morgan Stanley Since 2010, she's' been publishing the report from her new home as a partner at Kleiner Perkins.

So when Meeker proclaims this to be a new "Golden Age" for TV... and credits "Content Creation, Consumption, Curation, and Distribution" as the drivers of this massive change, it's time to lean in.

At this year's Code Conference, hosted by Kara Swisher and Walt Mossberg, the former leaders of the D Conference, Meeker's numbers around video were hard to ignore.

"Internet Advertising is up 16%, while mobile is up 47%, and still ONLY 11% of total ad dollars spent." Which leads Meeker to proclaim that "In Screen and Video Growth - we're still in the early innings." She quotes Reed Hastings of Netflix NFLX +0.44% in saying that screens are proliferating - multiplying in fact. Traditional remote controls are disappearing, and software apps are replacing channels.

"You Screen, I Screen, We All Screen" says Meeker. "Internet TV is replacing linear TV." 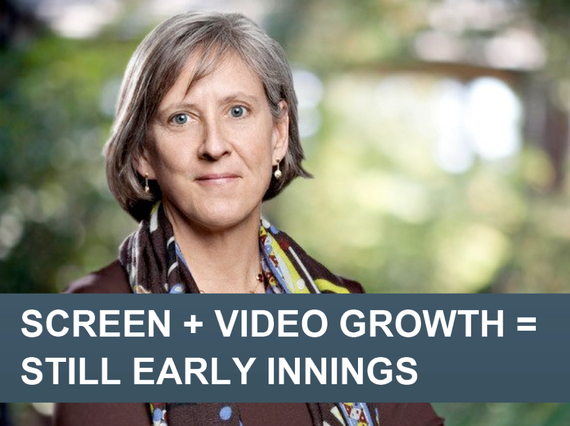 Mobile device shipments -- smartphone and tablets -- are up four to five times the sales of TVs and PCs. And that's just 10 years since they've arrived on the scene.

A stunning 84 percent of mobile device owners use their phones while watching TVs... that's most of us. And its doubled in just two years. People are watching while surfing the web, while shopping, while checking sports scores, and checking on show plots, actors, athletes -- all activities related to content on their screens. Emailing and texting -- using social media -- is also up there, but not one of the top four activities. In many countries today, smartphones are the most used media consumption devices. 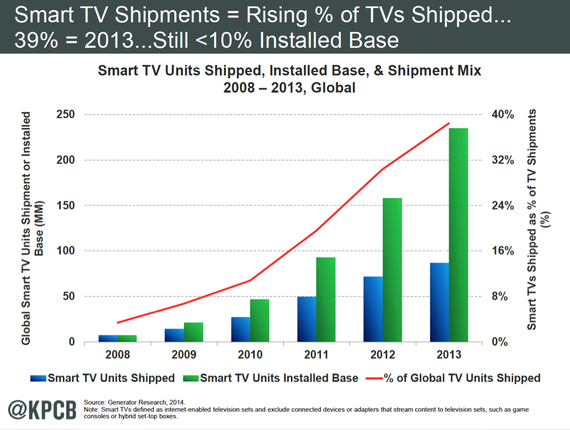 So how does having more screens impact the consumption of content? Meeker says; "Media engagement rises with screen usage -- doubling with multi-screen consumers. With more screens, people get more content in less time, making commercials less interruptive and more efficient."

The new remote control is an IP enabled enabled search engine, says Meeker, crediting Quincy Smith with the concept. And smartphones play a key part. Meeker points to both Chromecast and Kindle Fire TV as "Game-changers" in how people access the internet from their TVs. Smart TV shipments are growing like crazy, with 39% of TV's shipped now that are "Smart" internet enabled TV's. But it's still less than 10% of the installed base - lots more room to grow. Smart TV adapters and Smart TV's are game changers for Internet Enabled Screens of all sizes... big and small. 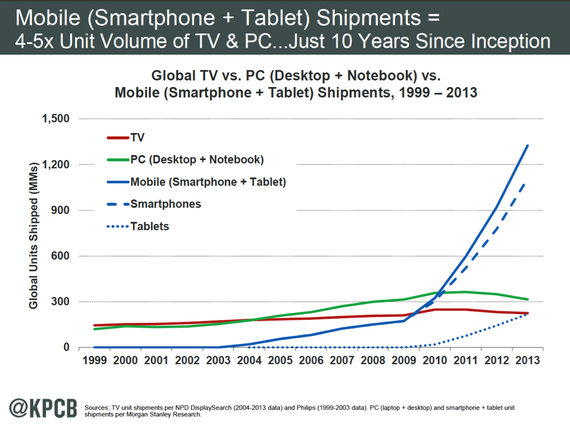 As viewers move to new screens, TV content is following them there, with 34 million (52%) of ESPN Digital users accessing ESPN just on smartphones and tablets. The BBC is seeing 234 million requests for TV programs via its iPlayer - HBO now provides 1,000 hours of video content via HBO Go.

But no longer are viewers 'passive consumers' of content. They are engaged, they are participating. Says Meeker, quoting YouTube's Alex Carloss; "Fans trump audiences. An audience tunes when they're told to, a fanbase choose when and what to watch... an audience changes the channel when their show is over, a fanbase shares, comments, curates, creates." Yup. She said the word. Curates. 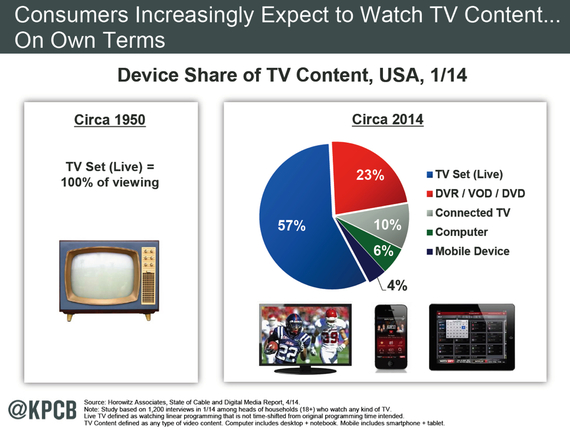 And Social TV is more than just a new way to play with TV. It changes the business as well. Meeker says Social TV provides measurable advertiser lift. Showing data from both Twitter and Facebook, Meeker says that social TV lifts ad value, recall, and purchase intent if well integrated.

Trends can be seen in younger viewers - where Millennials spend 3 times the amount time with internet based TV - 34% of their TV time. Internet TV is replacing linear TV. Meeker proclaims this - "The Early Stages of TV's Golden Age with Epic Content Creation, Consumption, Curation, and Distribution", as Internet TV replaces Linear TV.

And, how sure is she? "Consumers increasingly expect to watch TV Content on their own terms." The TV consumption pie is increasingly segmented, with 57% of viewing happening on conventional TV's, 23% on DVRs,VOD, or DVD's, 10% on connected TV's, 6% on computers, and 4% on mobile devices.

But the dramatic shift is in mobile, with 22% of online video time now spent on mobile, up 2x year over year.

It's the trifecta of change, with devices, content, and monetization all massively on the move. And Meeker's track record makes it hard to ignore. There's data that backs her crystal ball. She sees the future of the web -and increasingly it's one thing - TV 2.0.