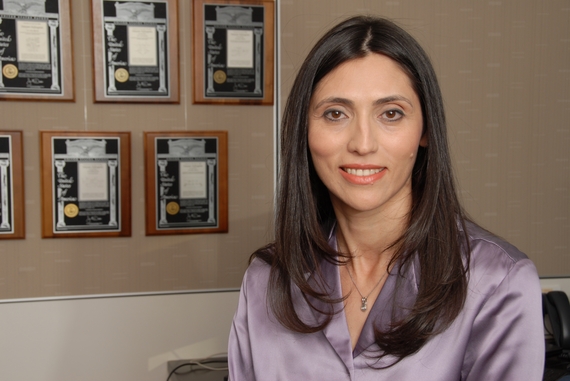 With the goal of harnessing the untapped potential of Iranian-Americans, and to build the capacity of the Iranian diaspora in effecting positive change in the U.S. and around the world, the West Asia Council has launched a series of interviews that explore the personal and professional backgrounds of prominent Iranian-Americans who have made seminal contributions to their fields of endeavor. Our latest interviewee is Maryam Rofougaran.

Maryam Rofougaran is a transformational inventor, technology executive, and entrepreneur in the field of electrical engineering, with a focus on wireless technologies. She was co-founder of Innovent Systems in 1998, and has been listed on the National Diversity Council's Top 50 Most Powerful Women in Technology. Maryam was instrumental in starting and building the wireless business at Broadcom and in growing it to annual revenues of more than $3 billion. Maryam has 245 (two hundred and forty-five) issued U.S. patents and 66 pending U.S. patent applications, has authored and co-authored more than 40 journal and conference papers, and is a senior member of the IEEE circuits and systems group. She completed her high school education at Behesht Aeen High School in Isfahan and holds undergraduate and M.S degrees in electrical engineering from the University of California, Los Angeles.

I was born and raised in the city of Isfahan, which is famous for its historic architecture and hospitality. We lived near the historic Shah Abbas Hotel and other landmarks. Education was regarded very highly in my family. My father had lost his father at the age of 3 and had to support his family from an early age. Despite his high intellect and desire to continue his education, he had had to stop after high school and become a merchant in the bazaar. My very talented and smart mother had also been hungry for higher education, but she too had to forgo this to focus on her family and children. My parents had four children: a son and three daughters. I am the third child and have an older brother and sister, and a younger sister. Both my parents were eager to see their children advance to higher levels of education and grow as professionals, an opportunity which they had not had themselves. My mother was actively involved with our schooling and education. My dad, while busy with work, also cared a lot about how we did in school and whether we were top achievers in our classes. Isfahan was a socially conservative city, but my parents were very open-minded and wanted their daughters to have the same opportunities as their son. While my parents were very involved in our educational lives, they were as eager to discover our potential talents and encouraged us to pursue them. For example, my mom recognized my potential in sports like gymnastics, volleyball, and swimming and tried to provide what was needed for me to continue those sports and compete on school teams. My mother also encouraged my talent in drawing and calligraphy and tried to facilitate the appropriate paths to improve my skills. My parents were very supportive and fully trusted us with whatever we eventually decided to do.

Thus, the bar was set high for me because of my family and educational environment in Iran. I was surrounded by siblings who excelled in school and this motivated me even more to succeed in my own work. My family was generally strong in math and science, and I enjoyed challenging myself with solving difficult math or physics problems and reading books on those subjects.

During middle school and high school in Iran, my dream was to become a scientist like Albert Einstein, discover something new, and win a Nobel Prize. I was in my last year of middle school when my brother left to go to the USA to seek higher education. I also wished to move to the USA to continue my education, and when I asked my parents they agreed to send me after I completed high school. Overall, I grew up in an environment that taught me to be eager to learn new things, to constantly challenge myself, to enjoy competition, and strive to be the best in what I liked and was passionate about.

What has been your personal key to success? Who and what were the biggest inspirations for your career?

To the extent that I have had "success" in my field, I attribute it to my love for math and physics from an early age and the fact that I have always enjoyed solving challenging problems. Hard work and perseverance have been other factors. In addition to these, the encouragement and continuous support of my family throughout -- especially my brother Reza who lived in the USA and was in the same field during my university years -- were important in giving me the confidence to continue to the next levels. They all believed in my talent and capabilities, and kept encouraging me throughout my studies and career. My husband has also been a major source of support for my career and has been a partner in taking care of our children so that I can perform the multiple tasks of being a businesswoman and a mother.

My inspirations changed over time and at different stages of my life. During my years in school, as I noted, my biggest inspiration was Albert Einstein with his theory of relativity, and his winning of the Nobel Prize in physics in 1921 for his contributions to theoretical physics. When I started working as an electrical engineer, my main sources of inspiration came to include path-breaking entrepreneurs such as Steve Jobs and Bill Gates, who made products that fundamentally impacted people and their lives. Having these role models motivated me to work hard to try to become more like them.

You have been listed on the National Diversity Council's Top 50 Most Powerful Women in Technology, which also includes pioneering women from Facebook, Google, Yahoo!, Apple, Salesforce, Netflix, Comcast, General Electric, IBM, Texas Instruments and more. What are your most significant accomplishments that brought you to this point?

Perhaps it's my long-term track record as an engineer who started as a graduate student as part of a very small team, which included my brother Reza as my coach. Our team was given the chance to work on new and challenging projects at UCLA's department of electrical engineering.

At UCLA, we implemented high frequency radio transceivers through a cheap Complementary Metal Oxide Silicon (CMOS) process. Prior to our work, CMOS was mainly used for implementation of digital circuits and baseband chips that contained mostly digital blocks. We managed to implement a complete high frequency radio transceiver "900Mhz spread spectrum radio" in the CMOS process and integrated it with the baseband on the same microchip.

While involved in PhD research, I started working as an entrepreneur, starting a company with my brother to develop short-range wireless communications, which was sold to Broadcom. At Broadcom, I continued to lead projects in the wireless business and helped grow the business to a larger unit with more than $3 billion in annual revenue.

During my years at Broadcom, we built a large portfolio of wireless standards and products that gained leading market share because of their high performance, low-cost, and low power consumption. We maintained our leadership in the market by continuously improving our products with new innovations, excellent execution, and efficient delivery. Additionally, we continued to create new products and added them to our portfolio. Over time, I have gained the respect and trust of many in this field by consistent execution and contributions. We have shipped over 1.5 billion new devices to customers in the past few years. These accomplishments have all helped to bring me to this point.

Can you share some specific highlights of your work?

I have been working in the field of circuit design and using innovative techniques to make analog and Radio Frequency (RF) circuits. We design RF/analog radios for wireless standards such as LTE, GPS, Bluetooth, Wireless LAN (WLAN), etc. Our microchips and their wireless applications are used in many consumer electronics devices such as the iPhone, Samsung Galaxy, iPad, laptops, cars, and so on.

You hold more than 200 U.S. patents. Can you tell us which ones have been your greatest achievement? What is the first thing new inventors should consider? What should they avoid?

You and your brother Reza are best known for the invention of combo chips that merge different technologies onto tiny pieces of silicon. According to Professor Frank Chang of the electrical engineering department at UCLA, your work has "revolutionized" wireless technology by integrating an unprecedented number of functions on a single chip. Could you tell us about your invention, what it is, and how you came up with the idea?

Our R&D work demonstrated something that people did not believe was possible: that radio functions could be implemented in the CMOS process and integrated with digital baseband on the same silicon. This was an important step because, firstly, CMOS was a very inexpensive process, and secondly, integrating both the baseband and the radio function on the same microchip/silicon would make the microchip drastically smaller in size.

We used the CMOS process to implement wireless chips in our wireless startup, Innovent Systems. After we were acquired by Broadcom in 2000, we continued to use the CMOS process in Broadcom's microchips such as Bluetooth, WLAN, GPS, etc. After a few years, we wanted to come up with a new and smarter idea to further reduce the size and cost of the products. This is when we decided to find techniques to integrate multiple wireless standard chips onto one microchip. Basically, we decided to put our Bluetooth, WLAN, and FM radios all on one silicon using the cheap CMOS process. This was challenging because there were many different Giga Hertz high frequency blocks from these radios that could interfere with each other when placed side by side on a very tiny microchip. We were the first to show that this integration is possible, and for a long time our competitors were struggling to make the same product with the high performance that we were achieving. This gave us a big lift in our market share and ensured our leadership in the market.

How do you see your field changing? What excites you most about the future of your field?

Wireless technologies are still in their infancy. There is an increasing need for reliable and affordable ubiquitous high bandwidth wireless communications because of the explosion of data traffic resulting from high definition video, Internet of Things (IOT), and other applications. We still lack reliable wireless communication that can transfer gigabit data rates in cities and metropolitan areas. We do not have even low data rate connections in remote areas, deserts, and some developing countries.

In the long term, wireless will become the cheapest and easiest mode of communication because it does not involve expensive and lengthy infrastructure investments such as putting cables or fibers underground. Future wireless communication systems will offer much faster data rates in the hundreds of gigabits range, and will utilize and combine different communication nodes such as satellite, base stations, small cells, etc., to connect the entire earth. Smart cars will be connected wirelessly and will use new wireless capabilities. In the future, wireless communications will play an even larger role in people's lives than they do today, improving capacity at home, work, hospitals, and remote areas, and enabling many new applications that have yet to be conceived.