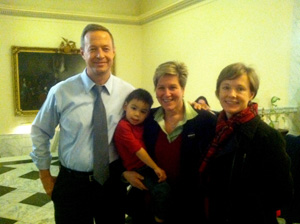 During the debate in Maryland's House, I joined same-sex marriage supporters outside of the chambers who were anxiously awaiting the vote. I met two moms and their 4-year-old son Will. After standing for hours, Will was tired and seemed a bit uninterested. I could only imagine how hard it would be to understand the complex discussions as a 4-year-old.

But the next day I saw a photo of Will and his family taken right after the House voted in support of marriage equality. His little face was lit up with joy, and he was cheering as his moms hugged him with the love that only a mother can provide. Will may not have understood the debates, but his smile after the vote proved one very important thing: even a 4-year-old knows the value of human dignity. 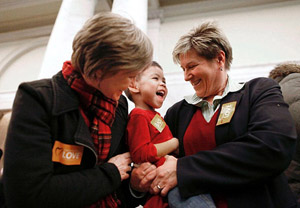 Yesterday was a day for Maryland's children. It was a day for human dignity. After years of hard work, we signed a bill into law that protects individual civil marriage rights and religious freedom equally. Yesterday, we came together as One Maryland and showed that there is more that unites us than divides us.

Our efforts were in essence about the dignity of every child's home. All of us, wherever we happen to stand on the marriage equality issue, can agree that all our children deserve the opportunity to live in a loving, caring, committed, and stable home, protected equally under the law.

We are a people of many different religions and many different faiths. The only way forward in a pluralistic society of diverse faiths such as ours is to have laws that protect and respect the freedom of all, equally.

That's why we joined together -- as clergy and faith-based leaders, as community activists and civil rights leaders, as volunteers, as legislators, and as citizens -- and passed a bill that provides equal protection under the law for every individual, and the free exercise of religion without government interference.

We are One Maryland.