A compromise in the General Assembly over legislation to undo a court ruling that declared pit bulls inherently dangerous has unraveled, turning what had appeared to be a settled issue into a dogfight between two veteran legislators.

The breakdown in the understanding between Sen. Brian E. Frosh and Del Luiz R.S. Simmons -- both Montgomery County Democrats -- raises the chances that owners of the breed will continue to face heightened liability and the possibility of eviction.

"I am extremely disappointed in Brian Frosh," said Simmons. "He basically reneged."

At issue is an amendment adopted by the Senate Judicial Proceedings Committee, which Frosh chairs, on Thursday night. Simmons said the amendment "killed" the bill. Frosh said Simmons is overreacting.

"He told me he's going to kill the Senate bill as a result," Frosh said. "I think he's making a mistake. I think we're very close to passing a good piece of legislation."

Frosh said the House should take the bill to a conference committee to negotiate a compromise.

Both the House and Senate versions of the bill would overrule the Court of Appeals decision last year that treats pit bulls by a different standard than is applied to other dogs. Both would adopt a "breed-neutral" approach to liability that modifies the standard that prevailed before the court decision. That standards known as the "one-bite" rule, exempted a dog owner from liability for an attack if he or she did not have reason to believe the pet was dangerous.

The House-Senate deal, announced by Frosh and Simmons earlier this year, would have given the victims of bites from all dog breeds a better chance of prevailing in a civil suit than they enjoyed before the Court of Appeals decision last year.

An owner would have been presumed responsible for a dog's attack on another person, but the owner could escape liability by showing more evidence than the plaintiffs that there was no prior history indicating the animal was dangerous.

Simmons charged Friday that an amendment added to the bill Thursday in the Senate committee altered the deal. He said the amendment -- proposed by Sen. Robert A. Zirkin and adopted 7-4 -- would expose hundreds of thousands of owners of other breeds of dog to substantially the same strict liability standard as the court applied to pit bulls.

Though Frosh, the committee chairman, voted no, Simmons held him responsible for the failure of the compromise.

The delegate, a senior member of the House Judiciary Committee, said he worked hard to hammer out a deal to resolve an impasse that kept the Senate and House from passing a bill during a special session last summer. He expressed incredulity that a committee chairman couldn't muster a majority.

"If he says he can't get six votes, then he's incompetent," said Simmons, who added that he was "embarrassed" before his own committee because he had told fellow members they could rely on Frosh's word.

Frosh said he fought hard to defeat the amendment -- an account confirmed by several members. While Frosh said he doesn't like the amendment, which requires the owner to provide "clear and convincing" proof there was no reason to suspect a dog would bite, he said it's a long way from strict liability -- an almost automatic legal presumption that the owner is responsible.

Zirkin, a Baltimore County Democrat, said that while Simmons may have had a deal with Frosh, he did not have a deal with the Senate committee.

Tami Santelli, Maryland director of the Humane Society of the United States, said she hopes the two sides can mend their difference because people are already being forced to choose between their dogs and their homes as landlords adopt exclusionary policies on pit bulls.

"A lot of people in the state will be in a really tough spot if they can't work it out," she said. 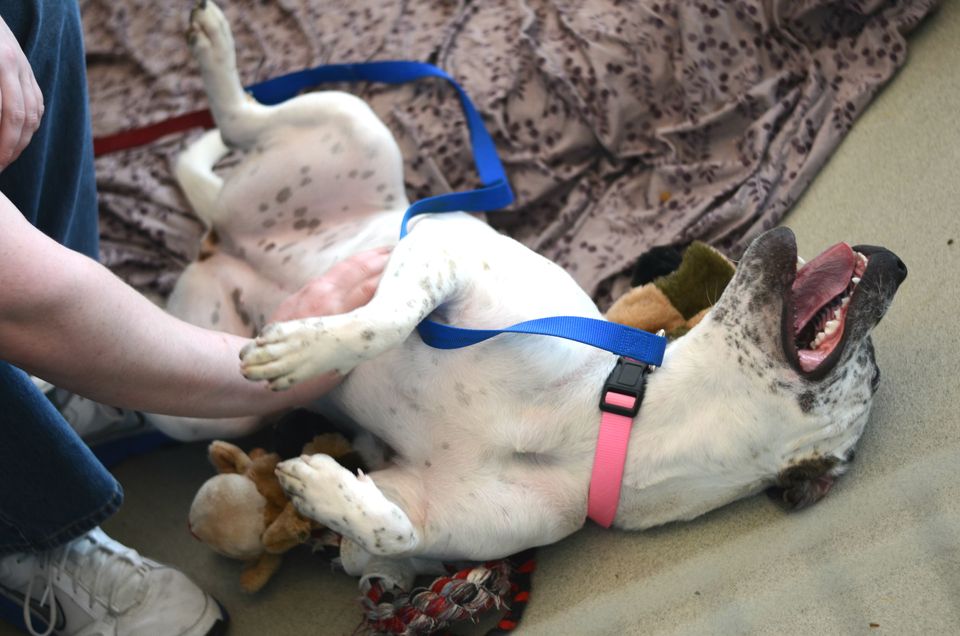 1 / 18
Aurora, Animal Welfare League of Alexandria
American Bulldog/Pointer mix 1 year, 2 months Female, spayed I’m a happy-go-lucky gal that loves to romp and play. This is a big and exciting word and I’m looking for someone to explore it with. I’m a special dog looking for a special adopter. I am deaf, so you’ll need a little bit of extra patience with me, but I am already learning hand signals and trying to be the best dog I can be. <a href="http://awla.convio.net/site/PageServer?pagename=home"></a>
AWLA