A few days ago, the New York Yankees signed Masahiro Tanaka to a $155 million contract. As Bryan Hoch of MLB.com notes, this is the fifth-highest salary for a pitcher in Major League history. But the Tanaka contract is different from the top four on the list. The top four contracts went to pitchers who were already playing Major League Baseball. Tanaka played last season for the Rakuten Golden Eagles in Japan's Nippon Professional Baseball league. And while his 24-0 record -- and 1.27 ERA -- helped the Golden Eagles win the Japan Series title, we do not know how he will fare against MLB hitters. Despite this uncertainty, there is still a sense that this signing illustrates that the Yankees have an unfair advantage.

ESPN's Tim Kurkjian was quoted by Sports Business Daily with the following observations:

To summarize, Kurkjian is expressing the sentiment that when teams like the Yankees spend much more than anyone else on talent, this is bad for baseball. Although Kurkjian's argument is often expressed, I am going to note that the academic study of competitive balance in sport (and yes, economists do look at this issue) suggests the Tanaka signing is quite good for competitive balance in baseball.

To see this, let's be clear that what Kurkjian argues has a very long history. Back in 1879 (yes, 1879), the following statement was released by the National League.

The financial results of the past season prove that salaries must come down. We believe that players insisting on exorbitant prices are injuring their own interests by forcing out of existence clubs which cannot be run and pay large salaries except at a personal loss [1]

So baseball people have thought large salaries are a threat for more than 130 years. Despite this sentiment, Major League Baseball -- unlike the NBA, NFL, and NHL -- does not have a salary cap. Consequently, baseball -- relative to these other sports -- has substantially more disparity in payroll. In sum, there does appear to be a difference in baseball between the "haves" and "have-nots."

At least, that is the payroll story. Payroll disparity, though, isn't really the issue from the perspective of the fans. What really matters is disparity on the field. And on that count, baseball -- relative to other sports -- doesn't really have a problem.

To see this, let's turn to a measure many economists use to capture competitive balance. About 25 years ago, economists Roger Noll and Gerald Scully independently argued that a league's balance could be measured by comparing the standard deviation of a league's winning percentage to the standard deviation that would exist if a league was ideally balanced. Across the past 10 years, here is what the Noll-Scully ratio looks like for the four major sports leagues: 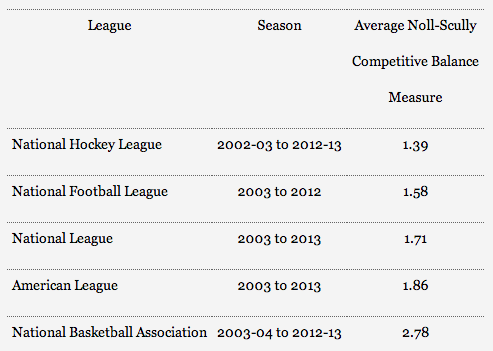 As one can see, the NBA is the least competitive sports league. Given that only eight teams have won an NBA title in the past 30 years, this is probably not a surprising result.

What may be surprising is that baseball once looked like the NBA today. From 1901 to 1946, the average Noll-Scully ratio in the American League was 2.54. In the National League, the ratio was 2.57.

These numbers tell us that baseball -- relative to what we see today -- was once competitively imbalanced. This started to change in 1947 -- that season Jackie Robinson began to play Major League Baseball. The racial integration of baseball expanded the talent pool beyond the white Americans baseball employed through much of its history. Soon, baseball began to employ talent regardless of race or nationality.

This expansion in the talent base improved competitive balance in baseball. To understand why, consider the argument evolutionary biologist Stephen Jay Gould made back in the 1980s. Gould argued that there is a normal distribution of talent in the population (i.e. average is the most common level of talent, with small numbers that are well below average and well above average). But the very best talent runs into the limits of the human body. Consequently, Gould argued that there is very little difference in the very best players.

When the population base is small -- as it was in baseball in the first half of the 20th century -- the population of "very best players" is quite small. Consequently, teams filled out their rosters with players that were not really very good. And when great players play the not-so-great, the outcome is quite certain and the league doesn't have much balance.

But when a league draws from a bigger population base, the population of "very best players" gets much bigger. Suddenly every team has great players. And just as suddenly, the league is much more balanced.

That is what has happened in baseball across the past several decades.

This is also why the signing of Tanaka is good for Major League Baseball. This can be made clear when we think about what this does for Japanese baseball. Consider the following from ESPN.com:

Tanaka's windfall, on top of Darvish's deal and subsequent success with the Rangers, is likely to be a clarion call to the next Japanese pitching ace with dollar signs in his eyes and dreams of coming to America. But MLB still needs to walk a fine line between keeping the door open for prime Japanese talent and not making the move to the U.S. so enticing that it raids Nippon Baseball rosters and cripples the Japanese game. As long as somebody is getting the money, the talent flow is going to continue to some degree.

"If the posting fees become too high, then you're going to have Japanese clubs selling these guys after 2-3 years," said one baseball official who's familiar with the process. "They're in the business of running a baseball league -- not running a player auction. If every young star player was posted and a club could get $30-50 million, some Japanese clubs would be in the position of selling players rather than trying to put together a competitive team."

In sum, losing talent to another league tends to worsen competitive balance. And likewise, expanding your talent base makes it better.

Of course, all of this might still leave you thinking that the Yankees buying a winner is bad for baseball. Perhaps the following might make you feel better: Variation in payroll in baseball explains less than 20 percent of the variation in winning percentage. One reason why spending doesn't match outcomes is that forecasting the future in baseball is difficult. We can look at the stats and know who was "good" or "bad" in the past, but the future -- especially for pitchers -- is hard to predict. Consequently, it is hard for the richest teams to simply spend money and win.

So if you don't like the Yankees (and I share this sentiment), do not despair. The Yankees cannot simply buy a title. But if the money in Major League Baseball can get more great players to come to the North America, then that is good for the game. At least, the game in North America.