The editors here at HuffPost Style take our mascara very seriously. Once we've found a lash-lengthening, volume-boosting and eye color-enhancing formula that we love, we make sure to stock up on it. (You never know when it'll become discontinued.)

But with so many new mascaras from hitting shelves this season, we'd figured why not try something new (at least for one week). Find out which mascaras beat out the competition in our challenge and be sure to tell us your favorite mascara.

What did it feel like applying the product? It went on fairly light and it only took one dip of the wand to coat all my lashes.
Did you notice a change in the length or fullness of your lashes? I mostly noticed a change in the length of my lashes, which almost doubled.
Did the mascara hold up to any other claims? Yes, it did deliver "dramatic impact" as it says it will on the tube (in regards to how long my eyelashes were).
Did it last all day without running? It did last all day and didn't smudge underneath my eye.
Was it easy to remove? It was very, very easy to remove, which I love. Usually I spend 10 minutes removing mascara, but this came off in under 1 minute and there was no residual mascara left behind.
Would you use it again or recommend it to a friend? I would recommend it to a friend, but with the caveat that it doesn't really thicken the lashes, rather it lengthens them (which is what some people want). I would definitely also let them know that it comes off easily (a huge selling point for me).
Rating: 4 out of 5.

What did it feel like applying the product? It went on surprisingly light, considering how thick the brush and formula looked.
Did you notice a change in the length or fullness of your lashes? My lashes were definitely fuller and more curled without being weighed down.
Did it last all day without running? It lasted most of the day, but I needed to touch it up if I was going somewhere after work.
Was it easy to remove? It was easy to remove and didn't flake off throughout the day.
Would you use it again or recommend it to a friend? I would definitely recommend this to a friend, since it performed just as well as many other mascaras in its price bracket but didn't feel heavy or overdone.
Rating: 4 out of 5.

What did it feel like applying the product? It went on OK, but the short plastic bristles didn't coat lashes fully, so it didn't apply evenly.
Did you notice a change in the length or fullness of your lashes? My lashes were longer, but they were not fuller -- in fact, this mascara had a bit of that unfortunate "spider" effect that it clumped some of my lashes together, making them spindly and less voluminous.
Did the mascara hold up to any other claims? My lashes were definitely blacker and longer, but it definitely didn't have the effect of multiplying my lashes by a million. The short plastic bristles, rather than the long fibers I'm used to, were ineffective -- I think that's what made the difference.
Did it last all day without running? Yes.
Was it easy to remove? Yes.
Would you use it again or recommend it to a friend? Nah, I think there are better mascaras on the market that go on more easily and don't have the clumping/spider-y effect. I won't be buying this one.
Rating: 3 out of 5. 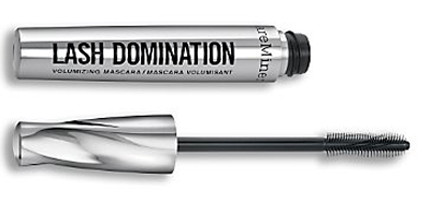 Did you notice a change in the length or fullness of your lashes? I don't think it made my lashes look fuller or more voluminous, but it's not clumpy. This product mainly lengthened and defined.
Did the mascara hold up to any other claims? I think the spiral brush really does work to "coat every lash" at all angles and is pretty cool -- I haven't seen something like that before.
Would you use it again or recommend it to a friend? I'd recommend because it applies and lasts, but it didn't really make my eyes "pop." Love the brush, but I wish it brought a lil' more drama.
Rating: 4 out of 5.

What did it feel like applying the product? I felt the same level of intimidation as I did when first learning how to use a lash curler -- this mascara looks like a miniature garden tool, for god's sake. Once I got passed that I was surprised with how easy it was to whip the wand back and forth.
Did you notice a change in the length or fullness of your lashes? My eyelashes were definitely longer and the carbon black color made them appear much fuller.
Did the mascara hold up to any other claims? While I can't speak to the 24-hour long-lasting claim since I wash off my makeup before hitting the sheets, I can attest that it did last the entire work day without any touch-ups. And the spunky bristles may it super easy to get right at the lash line, which made it look as though I was also wearing liner.
Did it last all day without running? Sure did.
Was it easy to remove? With my favorite eye makeup remover and a cotton swab, it wiped away in seconds.
Would you use it again or recommend it to a friend? I would definitely use it again and I've already made a point to put my friends on what I foresee being the Avon lady's next big sell.
Rating: 5 out of 5. I'm pretty darn happy with this mascara.

Check out the lashes on these ladies: