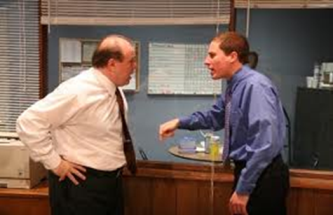 Here's the story. Last week I got an email from a woman with whom I serve on a board. I'll call her Fran (the name I used as the prototype of "feminine" ways of doing things). Fran informed me that I had done something that she disliked -- a week after the event. Surprised, I replied by apologizing for having upset her and asking her what I should have done differently. Fran replied by resigning from a project she had agreed to manage. I asked that we talk by phone to clear the air. I lost sleep over this conflict and its impact on my work with Fran (whom I like and respect). I worried she will talk about it with others on the board rather than resolve it with me alone.

That day I went to a meeting of another group where we each come prepared to discuss a current personal challenge. I asked the group (without naming Fran) for coaching on handling the conflict. One of the men I'll call Max (the name I've used the represent the prototype of "masculine" approaches). Max said aloud that something I had said irritated him. Great! I had a real conflict to manage. Max and I exchanged our points of view. We agreed to disagree but behaved politely and professionally.

I call the first two "masculine" and the third and fourth "feminine." In my examples, Max exhibited a "masculine" approach while Fran used the "feminine" style. It happened that Max is a male and Fran a female. Both men and women can exhibit either style, but research and observation show that more men than women utilize a direct or aggressive style of conflict, whereas more women than men handle conflict indirectly or avoid it altogether.

Now, don't get me wrong. A lot of people, both men and women, are lousy at conflict. But there are different ways of being lousy. The aggressive approach (e.g., a shouting match) may clear the air, but relationships can be damaged. Avoiding conflict is only good when the issue matters little and is not a battle worth picking. Avoiding (rather than resolving) an important conflict allows it to fester; it can come out later, sometimes in strange places and ways.

My least favorite style on the continuum, though, is "indirect conflict." Here are some things a person may do in handling conflict indirectly:

See if you agree that women are more likely to do these things. (There are lots of proposed roots for these tendencies in brain science, hormonal differences and culture.)

My default way of handling conflict is "feminine." I have had to learn to do direct conflict. (Being a Southern female, I do it politely.) But I still take things personally -- and hang on to them too long. Not only did I lose sleep over the issue with Fran; I felt a little hurt by Max and worried he disliked me!

What is your style? If I have done something to upset you in a meeting, will you yell at me? Will you "stuff it" and say nothing? Or wait a week and say something oblique (like Fran did)? Will you go tell three friends what I have done in order to get their agreement that you were wronged -- and to avoid the awkwardness of addressing me directly? Or will you wait until the meeting ends, take me aside, compose yourself, and calmly tell me, "Do not do that to me again." Where, on this continuum, is your way of handling conflict? Can you practice healthy conflict, the "middle way"?

How conflict is handled is part or an organization's culture. Some teams yell and point fingers. Others practice conflict avoidance. A leader can model healthy direct conflict and make it a value. Effective leaders know that direct conflict can be appropriate and important if done in a respectful and professional way. They know that, in some situations, a soft approach, or even letting a disagreement go, works better. Hopefully they also know that women like me can take things personally!

P.S. I have now reached a healthy resolution with Fran! We finally found a time to talk. She acknowledged that she was emotional and needed time to manage those emotions so we could talk it through. The "feminine" approach took longer -- but we successfully moved down the continuum toward direct conflict.