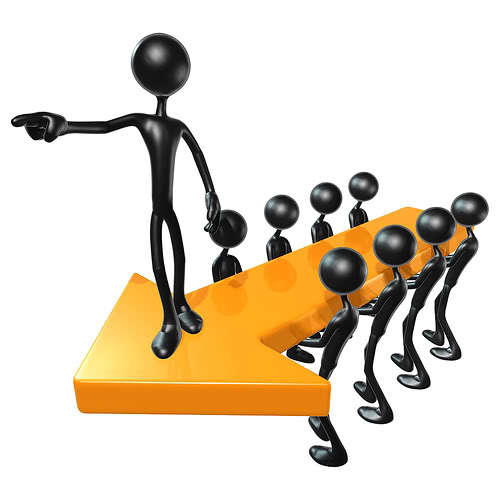 My vision is of workplaces -- and a world -- where men and women lead and succeed together. My focus is on gender diversity in leadership of the business world. My vision will occur when leaders recognize the value of both "masculine" and "feminine" ways of working and leading and create workplaces that leverage the strengths of both.

There are differences in "masculine" and "feminine" ways of influencing others: getting others to do what we want them to do or think the way we want them to think. Max uses a style of influence that I call "dominance," while I call Fran's style "persuasion."

The foundational difference between the "masculine" and "feminine" view of "self in the world" is this: Max sees himself as an individual in a hierarchy, while Fran sees the world as a network of relationships. In a hierarchy people at higher levels have more power than those at lower levels. In a hierarchy those higher in status tell those below them what to do. They may speak politely, but they express what they want clearly and directly. Max "leads from the front," choosing and showing the way to the goal.

In a network (Fran's framework) power is spread and shared more equally. Max's form of influence does not work well in a network, where preserving relationships matters more than status. Influence is done by persuading, a more indirect form in which the influencer does not hold himself or herself above the one being influenced. Fran is more likely to lead from behind and exhibit "power with" or "power through" rather than "power over."

Dominance is the best (maybe the only) form of influence that works when there is urgency or limited time, or when consistency is important. In battle the commander does not have time to solicit input from his soldiers. In a complex surgery the head surgeon gives orders. If a work team is making beer or tires or computers, they need to do the task exactly as they've been told. A commanding approach is clear and straightforward. It is efficient and effective. The disadvantage is that it can seem demanding, presumptuous or arrogant. It can shut down others, causing them to withdraw and not offer their own good ideas.

Persuading is best when others need to feel heard, included and involved, and when creativity, commitment or buy-in is important. With this approach to influence, others feel more respected and invited to offer their opinions -- with the result that more ideas are offered. The downside is that it appears less powerful, can lack clarity and takes more time. (Notice how many more words Fran used above.) And others may not follow an order phrased as a request!

Women face a dilemma in choosing a style of influencing. The workplace tends to apply a gendered view of leadership. "Leading from the front" (Max's style) is seen as synonymous with leading. A woman who gets great results by leading through inclusion and persuasion (Fran's approach) may simply not be seen as a leader. A study by the Stanford School of Business concludes that women who demonstrate certain "masculine" styles, including dominance, are most likely to get promoted -- if they can gracefully shift back to a "feminine" style.

That is the "double bind." If a woman uses the Max approach and tells others what to do and advocates strongly for her own ideas, rather than being seen as powerful, she might be seen as "bossy." A woman must be able to use the "masculine" approach of influencing to succeed in leadership, but she's not allowed to overdo it!

Organizations will see gender diversity in leadership when they value both forms of leading, in both men and women. That is, when women as well as men can choose the most effective style of influence for the circumstance -- and not fear being judged or penalized for either choice!