Yes, how you cook the potatoes, the tool you mash them with and what you mix in matters. But there's a fundamental step where many of us go wrong, and it takes place in the produce aisle. What you don't want to do is fill a plastic bag with one kind of potato, says Foster. Instead, mix it up. Using a few different varieties results in perfectly fluffy mashed potatoes that taste -- and look -- great. She suggests a combination of waxy Yukon Golds, which have a wonderful flavor and a beautiful yellow color; and, starchy Russets, which are sturdier and help achieve a fluffy texture (they also do a nice job of soaking up butter and milk).

Foster also encourages people to mix in sweet potatoes, parsnips and turnips; as well as small, red new potatoes; each ingredient will bring its own unique flavor dimension to the finished dish. For Yukon Golds, russets, sweet potatoes, parsnips and turnips, you'll want to peel the skins off first, then rinse the peeled vegetables to remove any remaining grit. For those who don't mind a little peel, Foster leaves the skins of the new potatoes on, since they're thin and a pretty red color to boot.

A few other mistakes to avoid:

Cutting the potatoes into small pieces.
Foster says she keeps small potatoes whole and cuts larger ones into big chunks. Just keep the chunks about 1 1/2 inches thick; if you cut them smaller, Foster says, they'll take in too much water, start to look transparent and won't soak up the other ingredients later. As you cut the potatoes, place them into a pot with cold water, so they don't discolor. When all the potatoes are in, put the pot on the stove and bring it to a boil. Lower the heat to a simmer and cover the pot to speed things up, so the potatoes steam while they simmer.

Boiling the potatoes ahead of time -- and leaving them in the water.
The biggest error Foster sees people make, when it comes to preparing mashed potatoes in advance, is boiling the spuds, then letting them sit in a pot full of water for hours. They'll soak up too much water, which leads to the same problem cutting them small does. Instead, simmer the potatoes until the tip of a small, sharp knife goes in easily. Then drain most of the water out of the pan. Keep about a quarter-inch in the pot and leave it -- and the potatoes -- at room temperature with the lid on. They can sit for an hour, or two, like this, Foster says. When you are ready to continue, set the pot over low heat and the simmering water will heat the potatoes back up so you can mash them.

Mashing with the wrong tool.
Once you've got hot potatoes, you're almost ready to mash. Drain out any remaining water, add butter and milk and put the lid back on. The potatoes and warm pot will melt the butter and heat the milk. Let them sit for three to five minutes, then mash. If you like your potatoes chunky, Foster advises using a masher (for more lumps, use the wavy-lined style masher; for fewer lumps, choose a grid-shaped one). For smooth potatoes with a whipped texture, use a hand mixer, which incorporates air into the dish. Whatever you do, don't use a food processor -- its quick-moving blade cuts the spuds, releasing too much starch, so the potatoes turn out gummy and glue-y.

PHOTO GALLERY
The New Potato Dish Everyone Will Love
Download
Calling all HuffPost superfans!
Sign up for membership to become a founding member and help shape HuffPost's next chapter
Join HuffPost
Voting Made Easy
Register to vote and apply for an absentee ballot today
Register now
Lynn Andriani
OWN
Suggest a correction 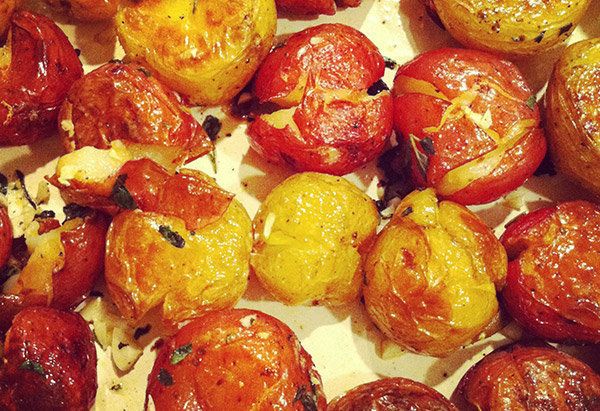 1 / 10
Smashed Potatoes With Garlic And Herbs
This game-changing technique will alter your view of just how delicious a potato can be. First, you cook baby new potatoes in simmering water just until they're soft enough that you can smash them slightly with the bottom of your fist. Then, you transfer them to a baking pan, coat them with olive oil and salt and slide them into a blazing-hot oven. The banged-up edges of the potatoes will be brown and crisp, while the insides will be soft and pillowy. <strong>Get the recipe: <a href="http://www.oprah.com/food/Smashed-Potatoes-with-Garlic-and-Herbs-Recipe" target="_blank">Smashed Potatoes with Garlic and Herbs</a></strong>
Lynn Andriani