The Harvard researchers said the rate of mass shootings has increased threefold since 2011, occurring on average every 64 days, compared with an average of every 200 days in the years from 1982 to 2011.

The researchers used a database created by Mother Jones to look at mass shootings, which they defined as attacks that "took place in public, in which the shooter and the victims generally were unrelated and unknown to each other, and in which the shooter murdered four or more people."

The graph below shows how the Harvard team plotted the increase in the rate of mass shootings since 2011: 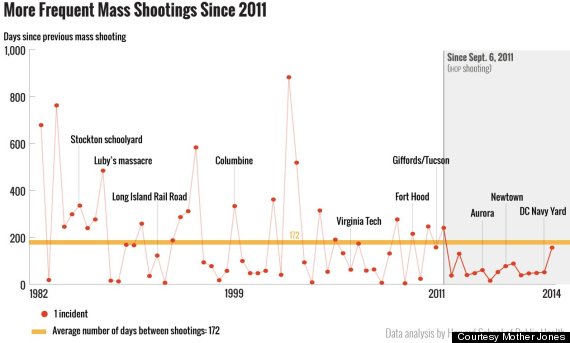 Some earlier media reports asserted that the rate of mass killings has not gone up. That claim, the Harvard researchers said, is based on what they call flawed research by Northeastern University criminologist James Alan Fox.

Fox's research uses a broader definition of mass shootings that includes any killing with a gun in which four or more people were murdered. That includes domestic shootings that take place in a private home, and gang-related or drug-related killings.

Mark Follman, Mother Jones' senior editor, explained why the distinction in the definitions is important.

"Our focus has been on public attacks as opposed to domestic attacks," Follman told The Huffington Post. "Domestic killings are no less serious, but they are a different kind of problem. It’s terrible when a mentally disturbed person slaughters his whole family in his home, but that’s different from indiscriminate killing."

Follman did not take part in the Harvard analysis, but Mother Jones provided the data upon which the findings are based.

The researchers looked at the amount of time between mass shootings. "This is more effective than counting the annual number of incidents because it is more sensitive to detecting changes in frequency when the number of events per year is small, as is the case with public mass shootings," the researchers explained.

Follman said he hopes the data will give policymakers a clearer idea of how frequently mass shootings occur and help them decide what can be done to curb them.

"The universal goal is we want to prevent these from happening," Follman said. "You have to understand the problem better and track the problem accurately. The clearer the data we can get on mass shootings the better."

UPDATE: Criminologist Fox emailed HuffPost with a response to the Harvard research:

"Why would it be 'flawed' to include all cases of mass shootings, rather than trying to impose somewhat arbitrary criteria. Four or more killed with a gun IS a mass shooting, no mater where it takes place and by whom."

Fox adds, "To the victims who are slain, it hardly matters whether they were killed in public or in a private home. Nor does it matter if the assailant was a family member or a stranger. They are just as dead."