The National Election Pool did not conduct an exit poll for the Massachusetts gubernatorial race this year. However, I led a team of students at the University of Massachusetts, Amherst to sample voters at 18 precincts across the state today. You can find specifics on our Massachusetts Exit Poll survey, including preliminary results, here.

One finding clearly jumps out from our preliminary results: Deval Patrick (D) appears to owe his victory today to women. As the chart below shows, men divided fairly evenly between Patrick and his Republican challenger, Charlie Baker. But women broke strongly for the incumbent, by a margin of more than 20 percentage points. That provided the winning margin for Patrick. 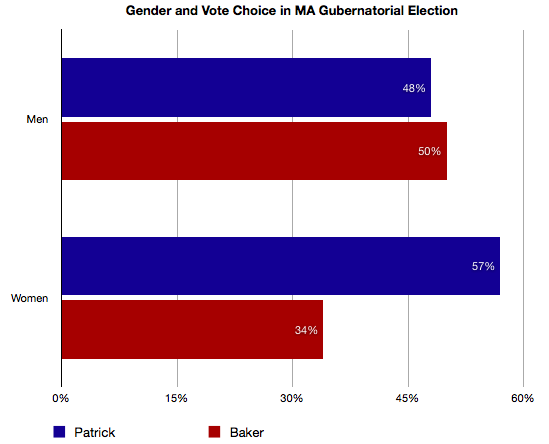 Not surprisingly, the economy was the most important issue for Massachusetts voters. Interestingly, while 42% of Massachusetts voters said that they thought the economy was worse than it was a year ago, a similar proportion (48%) said it was better, with the rest indicating that it was about the same. Patrick actually carried 50% of the vote among the almost nine in ten voters who said the economy was very important to their vote. Patrick also won among those choosing education and health care as an important issue, with Baker carrying voters who viewed taxes as very important to their vote.

Despite Patrick's victory, the Tea Party movement did appear to demonstrate significant strength among the Massachusetts electorate. Forty percent of Massachusetts voters said that they either strongly or somewhat supported the Tea Party Movement, and about three of every four Tea Party supporters voted for Baker.

Details on the UMass Exit Poll: 835 Massachusetts voters were surveyed leaving the polls in 18 randomly selected precincts across the state on election day.The survey has a margin of error of 3.4% with a 95% confidence level. Margin of error will be greater for subgroups.Calculations are produced using sampling weights to account for the sampling design. Results have not yet been weighted to account for non-response.

Correction: The percentages for voters' evaluation of the economy compared to a year ago have been fixed; they were initially only half as large as they should have been.