When I moved back here three years ago from Washington, DC (not exactly the epicenter of fashion either but several measuring tapes ahead of Bean Town), I bemoaned the lack of intentional fashion, as opposed to the accidental or incidental that is Boston's paradigm. Determined to uncover any latent possibilities, I set out on a style quest that has turned up a few gems.

Most recently, Massachusetts College of Art and Design (MassArt)'s formidable fashion design curriculum and senior collections made me a believer. On May 9, 2015, the art school that parallels New York City's Fashion Institute of Technology and Parsons fashion design programs showcased its 108th student fashion show, entitled "Vision." (A previous commitment kept me from the show itself, but I viewed several of the collections beforehand.) Anna Wintour and Tim Gunn surely would have coveted my first peek at these boutique-ready garments.

MassArt professor James Mason, himself a 2006 alum who worked in retail as well as designed his own collections before returning to teach, curated this year's show. He, along with other department instructors, help hone the skills and dreams of the young, talented designers. The program doesn't force themes (à la Project Runway) upon students, but rather allows them "to do what they do best," says Mason, adding, "I love what I do."

While a student entering the Fashion Design program need not have sewing skills, s/he must possess a passion for fashion. Senior Megan Reynolds, whose collection, "Pangaea Apocalypse," I found to be one of the most moving, said her inspiration was "the apocalypse... with survivors picking up and creating their own personal style." She employed silhouettes that juxtaposed a half skirt shape with trousers and colors (some hand-dyed with curry and turmeric) that mixed winter with fall. It is a remarkably emotional collection for someone of Megan's youth because of the maturity of fabric and color selection and the courage of its interchangeable gender notes and androgyny. It was no surprise she cited recent CFDA awardee Hood by Air as one of her designer inspirations.

MassArt seniors work on their final collection for the entire year. They are given carte blanche in terms of self-expression. Over the course of four years, students study pattern drafting, illustration, computer creation, draping, women's and men's wear, tailoring, made-to-measure, bridal, fashion history and more. They also spend time working in teams. By sophomore year, they have finished three full garments; by junior year, seven and senior year, 10. According to Megan, MassArt gives students "time to create... and think things through," along with training in "craftsmanship."

Although I was only able to view a portion of the featured fashion lines, I was duly impressed. In addition to Megan Reynolds, the following designers offered unique and highly polished collections: 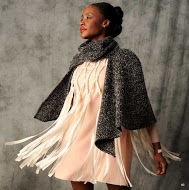 Rachel Krafton's "Framework" played creatively with new shapes, a mixture of textures including non-traditional fabrics constructed to display metaphors such as the wearers being "the same women though all not going to the same place."

And finally, the narrative in Carly Hempel's "You Need Me" reflected on "women's bodies and insecurities." The models appeared confident, though, highlighting clothing that hugged the body via soft knits and impeccable construction lines.

As I listened to student designers discuss their work with faculty panelists, I was struck by their varied methodologies as well as the diversity of the designs themselves. Some had complex stories and descriptives while others eschewed any deep meaning or explanation.

My only regret is that I did not see all of the collections as I'm certain there were many more showstoppers. With each senior class show, MassArt continues to establish its firm fashion footing well beyond Boston while concomitantly securing Boston's often elusive style presence.