Massachusetts College of Art (MassArt) is back in full effect for its 109th student fashion show, "Circuit", to be held on Saturday, May 14th at the Power Station, 540 Harrison Avenue, Boston. Once again, I was privy to the Senior Review prior to the actual show. This is the last of several critique intervals the seniors must endure. During their four year journey, MassArt students study illustration, pattern drafting, computer creation, draping, women's and men's wear, tailoring, made-to-measure, bridal, fashion history and more. They begin working on the inspiration for their senior collections right away. By sophomore year they have created three garments, seven by junior year and ten by the end of senior year. Five are shown at the fashion show.

This year's Senior Review was run by faculty members (Chair and Professor Sondra Grace, Professors Jayne Avery, John Distefano, Renee Harding, James Mason and Jennifer Varekamp) who were mostly complimentary. The criticism that was offered tended to suggest (not demand) a different lineup, inquire about "shoe messaging" or to move a purse or gloves from one model to another. There is less Michael Kors type take-down of designers and more Tim Gunn style nurturing. No one was reduced to tears although one model's legs did give way because of the amount of time she spent standing in high heels. When this occurred the show did not just go on; concern was palpable as faculty members stopped the review and assisted the young woman until she felt better. Kindler, gentler fashion show prep happens at MassArt.

Professor James Mason, is at the curatorial helm of the show but neither he nor the other dedicated professors require students to adhere to any particular theme. Although the show is titled "Circuit," partly because it takes place at a venue called "The Power Station" and the show is also billed as "connecting clothes with a purpose," each designer developed his/her own separate theme. Ironically, though, I noticed several variations on similar ideas as the 17 senior designers discussed sources of inspiration with the faculty panel and via written statements. Some of the ideas expressed: transition, personal loss, being lost, sadness, illness, despair, transformation, healing, melancholy, strength, confinement, misunderstanding, silence, starkness, gender blending, and survival. Such mature and vivid ideas seem to be a reflection and fusion of what students have experienced and/or observed. Each designer did what artists are known for; they took the experience, no matter how painful, disturbing or eye opening and translated it to their designs. It was a thrill to see how some of these rich and complicated themes found their way into the garments.

Fashion is communication in one way or another and the following narratives spoke volumes to me:

Emily Carini's "Leaving Eden" collection focuses on a "new narrative on the origin of mankind," this time one that is genderless. I am impressed with the strong fabric textures, detailed workmanship, the color palette of forest green, gray and mauve and as well as the disparate hem lengths, fresh silhouettes and her variation on color blocking. 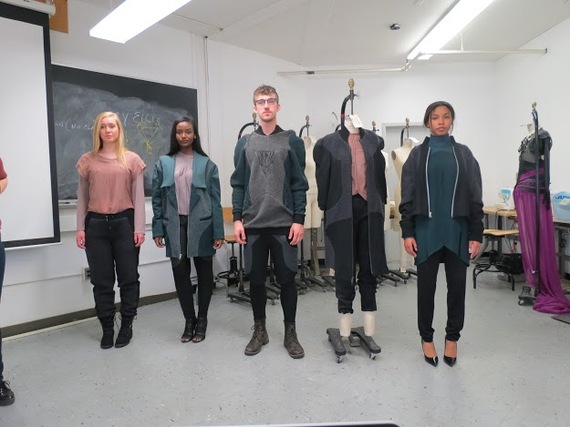 Crystal Chanthavong's "The First Circle" is an ode of sorts to burn victims, focusing on "transformation through treatment and healing" via colors and fabric manipulation. She uses varied silhouettes, spider webbing of transparent fabric, puckered textures, fire-hued zippers and grommets and even a muzzle to represent "being constrained after a trauma."

Johnny King's complex inspiration for his "Despair Factor" collection dictated my interest in the clothes. He describes being drawn to a "psychological place" where "mental illness mixes with creativity" and "ways of hiding while being exposed." These ideas translate into rich gray and black protective wear utilizing waxed fabrics, unique cuts, subtle detailing and formal mixed with casual. He also includes hand-made jewelry pieces. 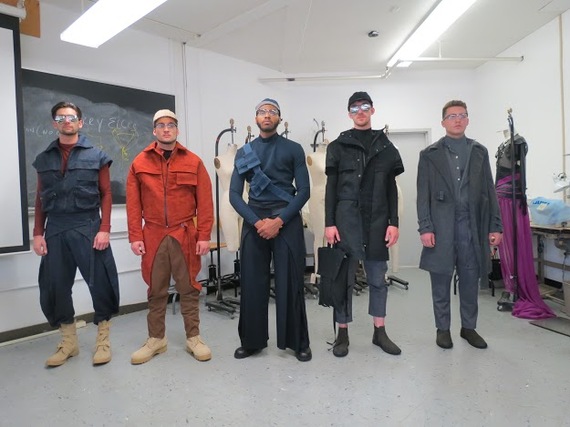 Influenced by a chair design, Naomi Fyhr's "Melancholia" focuses on "being guarded and trapped within oneself while trying to find internal balance." The back of each gown has intricate laser cut leather-strapping details that resemble tattoo designs. One in particular shows the chair caning influence in an unusual way. The other fabrics are also manipulated with chiffon smocking and sculpting.

Emily Lee's "From Void: the Beginning" collection, inspired by "the amnion - an inner sanctuary that the womb encompasses" in which she tries to "capture the texture" of a "prenatal environment" is a delightfully intricate confection of draping, hand-marbled fabric, distressed chiffon and dyed boucle, melted organza, intriguing shapes and lengths in pale blues, pinks and mauves. (I'd lose the marbleized stockings that bear too close a resemblance to varicose veins.)

Lastly, Roshan Akbari's stunning "Winter's Soul" collection celebrates "the beauty and silence" of "fresh snow" and the "diamond shapes of frost" with modern yet intricate work that calls up images of brocade textures and uses something akin to petticoat hooping in the skirts of her long gowns. With a palette of blue, white and silver, using ruching, faux fur and sequenced fabric, her collection simply dazzles.

All images by Jennifer Varekamp>

This year's show promises a bounty of thoughtfully inspired, professionally executed, handsomely modeled, often surprising, frequently innovative and always exciting concepts. The pre-show party (the proceeds of which provide full tuition to a deserving student) is already sold out so don't miss the show itself and definitely don't miss the opportunity to donate to such a proven and worthy design program.