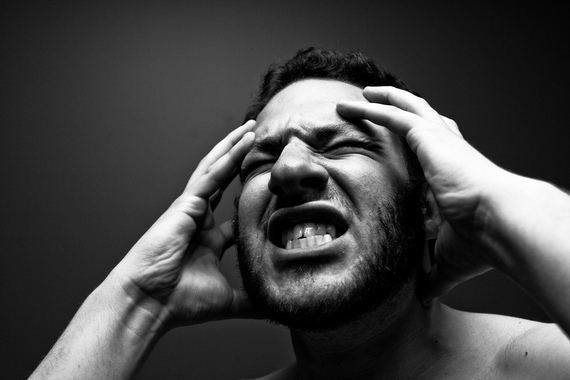 Frustration may be your most significant obstacle to achieving your athletic goals. Every athlete, from juniors to Olympians and pros, has experienced the feeling of frustration when they're not able to do something, whether physically, technically, tactically, or competitively: you feel stuck, get tense, lose focus, and get discouraged. The best way I can describe the feeling is: AAARRGGHH!! It is a truly infuriating feeling.

But what is frustration precisely and what causes it? Simply put, frustration arises when the path toward your goal is blocked, whether the goal is setting a new PR in your squats, nailing a new technique, or getting a good result. Frustration is an emotion that you probably experience frequently. And it can be really discouraging and, well, frustrating.

Most people think of frustration as a bad emotion, but it is actually more complex than that. The fact is that frustration is hard wired into us to help us survive. Frustration starts as a good emotion because when you get frustrated, you're motivated to remove the obstacle that is blocking the path toward your goals. You try harder and that extra effort can result in clearing that path enabling you to continue to pursue of your goals.

A problem is that those attempts to clear that path to your goals can actually be hurt by frustration. Generally, when you're frustrated, you are very focused on the strong feelings of frustration rather than on how best to overcome the frustration and clear the path. So, these well-intentioned efforts can end up increasing, not decreasing, your frustration.

If, despite your best efforts, you can't overcome those roadblocks, frustration can become an even more destructive emotion. In fact, if frustration isn't dealt with quickly and positively, it can trigger what I can the "negative emotional chain" in which the frustration leads to a descent into a series of truly unhealthy emotions and a serious decline in performance.

If the frustration isn't relieved, it can morph into anger. Most people also believe that anger is a bad emotion, but, like frustration, it too has both positive and negative sides. Anger starts out as being potentially helpful because it too is motivating. When you're angry, you want to go after the thing that is causing your anger. I remember one ski race I was in while skiing for Middlebury in which I was absolutely livid because the officials changed my time in the race the day before and I lost out on a trophy. I was so angry I attacked that day's courses like a madman and I won!

Unfortunately, more often than not, anger can turn into an emotion that hurts your performance. The feelings of anger are like those of frustration, but with the volume turned way up. Your body becomes tense, you lose your coordination, and the quality of your efforts decline. Your focus narrows so much that you miss important cues during a competition. And your ability to think becomes clouded by the anger, so you aren't able to make good competitive decisions.

If you aren't able to clear the obstacles from your path at this point, your emotions shift to the final stage of the negative emotional chain; you experience despair. You have tried and tried and tried and still can't remove the barriers, so the natural thing to do is to quit. What's the point of continuing to try if nothing you do works? The unfortunate outcome of the conclusion of the negative emotional chain is immediate failure to achieve your goals.

It has been my experience that if you move from frustration to anger to despair, continued efforts that day usually fail. And if you experience the negative emotional chain on a regular basis--sinking repeatedly into despair--you will likely lose your motivation and be unwilling to make a sustained effort in the future. With each descent down the negative emotional chain, you come to believe that your actions have little effect and you will progressively lose confidence in your ability to achieve your goals.

Despite the powerful influence that frustration has on your training and competitive efforts, you probably never were taught how to deal with your frustration in a constructive way (it should be a required course in school!). Your goal is to learn to stop the negative emotional chain at frustration by responding positively to the frustration when it first arises.

The first mistake that many people make--and that parents often encourage--when faced with frustration is to just increase your effort, in other words, do whatever you are doing more and harder. But then you are violating the Law of Insanity: doing the same thing over and over again and expecting different results.

When frustration first arises, rather than plowing ahead, you should do just the opposite, in other words, step back from the situation that is causing the frustration. For example, a tennis player who keeps missing her down-the-line forehands should first take a break. The break creates emotional distance from the frustration, thus easing its grip on you.

Next, you should do something that creates emotions that are the opposite of frustration, for example, have a snack (hunger is a significant cause of frustration, particularly among children), listen to music, or talk to friends). This step lessens the uncomfortable physical symptoms that accompany frustration and generates emotions, such as happiness or fun, that can counteract the feelings of frustration. A great way to counter the feelings of frustration when you take a break from training is to do something at which you can succeed, for example, returning to the tennis player I just mentioned, she might hit some crosscourt forehands that she is good at, thus feeding your feelings of confidence and generating positive emotions such as pride and hope.

Once the negative emotional chain has been broken, you should return to training with a focus on finding a solution that will relieve the frustration. This process starts with understanding the problem. If you know what the specific problem is, then you have a better chance at finding a solution and removing any more chances of experiencing frustration. Returning to the example of tennis player who was missing the down-the-line forehands, she can ask her coach what is causing her to miss (e.g., not turning her shoulders enough) and how she can remedy the problem. Here's a helpful hint: sometimes it's useful to break down the bigger problem into smaller, more manageable problems.

The reality is, though, that you can't always immediately clear the obstacles to your goals, so continued efforts in pursuit of those goals might be futile. The barriers may be just too great to surmount on that day. In this case, you have two options. First, you can change your goals to ones that can be achieved in the short term. Again, using the tennis player as an example, if she is getting frustrated because she is playing someone much better than she is and has already lost the first set badly. If her goal remains to win the match, she is sure to continue feeling frustrated. In that situation, it would be easy for her to despair and tank the second set. But if she can come up with a new goal for the second set, say, keep fighting or break her opponent's serve at least once, she may let go of her frustration, relax, play better than expected, play well the second set and end the day feeling more upbeat (as well as learning a lesson about how to deal with frustration).

Second, there are going to be days when you just aren't going to make any progress toward your goals and continuing to try without success will just discourage you more and actually hurt your efforts in the long run. In this case, it may be wise to deliberately "give up" and choose to fight another day.

The reality is that the pursuit of your athletic goals is a very frustrating process because it is long and difficult with many setbacks and failures. Experiencing frustration gives you a great opportunity to embrace the frustration and learn how to deal with it in a positive and constructive way.