This week, the chicken comes before the egg, but the eggs are really, really, hard to cook.

I will never have eggs benedict without thinking of Daniel's missing yolk. How does that happen? It's all technique, finesse, and science, and it does a number on everyone. 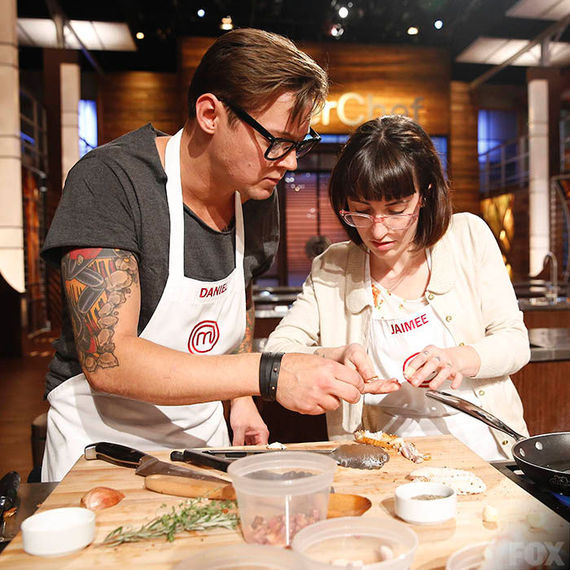 First, they have team challenges to cook different chicken parts. Leslie and Elizabeth (an unlikely pair that inspired many lame jokes from the judges) cook a curry that caused me to order take-out it looked so delectable. The losers? Cutter and Willie who make a chicken breast dish that I believe Gordon Ramsey just refuses to eat. Courtney and Christian skate by with a weird brussel sprout and tomato dish and Daniel and Jaime make wings I want to eat, even if Joe B. called it airport food. Which is slightly better than airplane food and would have been an entirely different story.

So Jaime, Willie, Cutter, and Daniel have to cook eggs a bazillion ways. Ok, well, it was only three but it was really, really hard. Jaime manages. Cutter somehow wins with a poached egg ravioli. How his gnarly manhands did not break such a delicate item is a mystery. I really want him to lose, I feel so bad.

Willie sings Amazing Grace over his boiling egg and it works. Whew.

At the end of the episode, it's Daniel and Jaime and egg soufflé. It's the closest elimination I've seen yet. And while it should be Cutter just because (sorry, bro), Jaime wins and Daniel is sent home.

This is a bummer because he would look so good on a cover of a cookbook! And he has nice tattoos and when he fights with Leslie it's television gold. Also, I want him to open a restaurant now because I feel like he has good taste in craft beer.

It's down to the wire, my foodie friends. Who are you rooting for? Let me know in the comments or @karenfratti.