Note: Do not read on if you have not seen Season 5, Episode 6 of FOX's MasterChef, titled "Top 16 Compete."

How depressing! Canned food and stolen panna cotta have a moment this week. But let's start from the beginning. 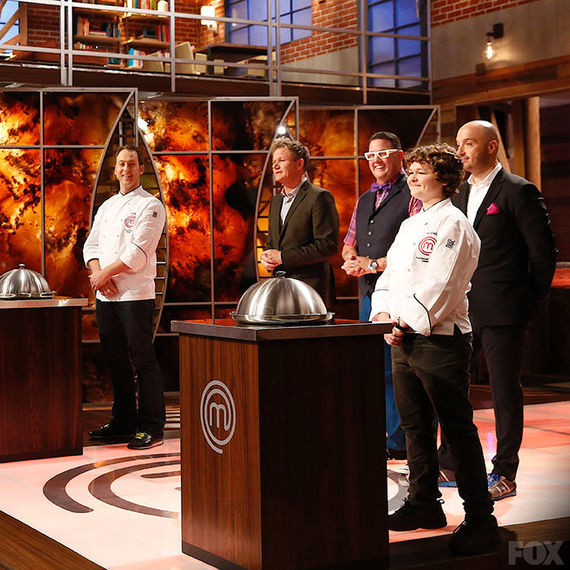 The Mystery Box challenge really brought me back to my college days: making a stellar dish with unlabeled cans. A lot of the chefs wasted time opening all 52 of them and being boring; the top three stood out for being efficient, balanced, and interesting. I was pulling for Victoria who made some trendy meat fritters, but I think her canned artichokes didn't hit the mark with the judges. Ahran proved her smarts (and now Joe B. is favoring her a little after her rant a few episodes back, don't you think?) by using only one can of fruit cocktail to make a sponge cake with the staple box. The winner of the Mystery Box ended up being Elizabeth, though, who made a very ugly, but apparently tasty, borscht-like thing.

So be it. She goes into the pantry and into hardcore swoon mode because last year's winner Luca and a MasterChef Junior champ Alexander are there. It's not just for plugging Luca's book and the MC brand. OK, it is. But Elizabeth gets to choose who makes whose signature dish. The little guy has a pristine panna cotta; the Italian, some saltimbocca on steroids. Elizabeth goes into it thinking of choosing those competitors who lack 'finesse' to make the dessert and those who have unrefined palettes the veal.

So, Willie is psyched out (and he has no idea what radicchio is). Courtney, as always, is majorly cocky. You have to hand it to the producers on that one, especially with shameless panning to her heels. And Elizabeth does a supreme job of acting excited about "hanging" with the MasterChef champs.

The judges decide that rules are rules and you have to plate your own food. Ironic, coming from three restaurateurs known for their sneaky, cost cutting ways. Anyone read Joe B.'s book?

So, Willie was saved by a fluke. We'll never get to see Tyler's stewed squirrel. And Courtney wins the day.

Very anticlimactic and sort of upsetting, right? What did you think of this week's competition? Let me know in the comments or @karenfratti.