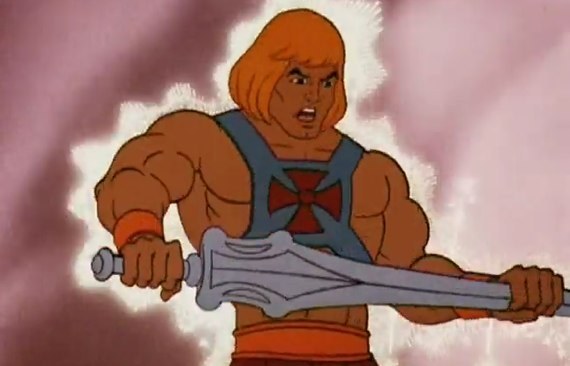 On Monday, Deadline reported that Jon Chu -- who is also directing G.I. Joe: Retaliation -- is in discussions to direct a new Masters of the Universe film. (For the record: I like Chu and, like with the G.I. Joe sequel, I think he does care about delivering a good movie that accurately represents the characters.) In the meantime, I couldn't help but think of what my dream (yet halfway reasonable) cast would look like. Because, good grief, I just don't think I could stomach another Masters of the Universe film like the one we already have. (And it goes without saying: There is no imaginable way that the new film should take place on Earth. Ever.)

I have mixed feelings on the whole Prince Adam storyline. A creation of the first animated series, Adam is the less masculine alter-ego of He-Man. When the toy line and accompanying comics were released, Adam did not exist. He-Man was just He-Man. The cartoon provided He-Man with a secret identity, even though he looked exactly the same, only a little less tan and with more of a falsetto voice. For an entire feature length film, Adam most likely needs to be part of the storyline to make it interesting. But really use Adam. In other words: make him a completely different person than He-Man -- to the point that the two look different. Which leads to...

"By the power of Greyskull" -- a phrase that brings a series of lightning bolts reigning down on Adam -- should do more than just add a tan and lead to a change in wardrobe. A physical transformation should occur. So, yes, Liam Hemsworth would transform into his more sturdy-looking older brother, Chris. Plus, as Hemsworth as shown with Thor, he's got a knack for playing a brutish sort with an air of humor and confidence.

As noted, Man-At-Arms was my first Masters of the Universe action figure. So, imagine my dismay when the animated series portrayed Man-At-Arms as an old man with a mustache named Duncan. Sure, Man-At-Arms can still be older than Adam/He-Man, but he needs to be in prime fighting shape. And the previews from the upcoming Dredd can't help me think of Urban as a more brutal version of this master of weapons.

Wilde has been this close to the perfect sci-fi/adventure role before. More so in Tron: Legacy than Cowboys & Aliens (thanks to an unfortunate twist), but Teela might actually be just right for her. Teela isn't just there to be the female character who just moves the story along or be the love interest -- her presence as, technically, the person responsible for Prince Adam being the head of the Royal Guard adds a needed element.

This role comes with a caveat: No over-the-top cartoonish cackling. This version of Skeletor should be a twisted genius. Not an equal to He-Man as far as strength, but his conniving and intelligence would far surpass his arch foe. Plus, in the early version of the comics, Skeletor held one-half of the Sword of Power (the sword that came with the He-Man and Skeletor action figures would actually snap together), a story that expanded on this aspect could perhaps be interesting. (If Waltz is busy, Javier Bardem will do.)

Chu already has a relationship with Johnson from G.I. Joe: Retaliation, so this would make sense. Beast Man had a tendency to be portrayed as a simpleton lackey. For a new story, Beast Man would still supply the strength that Skeletor is missing, but, instead of being a simple stooge, Beast Man would supply a dose of full terror. And, yes, I know this isn't exactly Johnson's forte (he is a very charming man!), but I'd like to see him try.

Munn has been on quite a role lately (most recently on The Newsroom). While Teela needs an actor to bring a special kind of stoic earnestness, Evil Lyn needs more, well, sarcasm -- which Munn has been known to supply.

I've never seen Guy Pearce play what feels like the same character twice. Here, he'd have to play an actor who is cursed with two additional personas. If nothing else, I'd just love to see Guy Pearce in a Masters of the Universe movie.

If you're a Game of Thrones viewer, I feel you may be one step ahead of me on this one. So, basically, imagine Tyrion Lannister equipped with headgear that would allow him to knock down any barricade. In the past, Ram Man is presented with a lack of intelligence. If Dinklage is attached, that would have to change.

This is my, "Well, why not?" selection. Not even referencing his work in Sherlock, Cumberbatch already has a plethora of buzz leading up to the sequel to Star Trek -- and it hasn't even been announced yet who he's playing. Substitute any of the other villains in for Tri-Klops -- Trap-Jaw, Kobra Khan, Leech, Spikor, Webstor, Stinkor, Whiplash ... whatever -- just let Cumberbatch play a villain in Masters of the Universe.