You never know what's lying just beneath the surface in your own yard.

Most people find some old coins or a rusty bicycle chain. But two men in Michigan hit the jackpot when they discovered the remains of a massive Ice Age mammal.

Contractor Daniel LaPoint Jr. was working in Eric Witzke's Bellevue, Mich., yard when he noticed a giant rib sticking out of the ground, according to the Lansing State Journal. Over four days in November, the two worked together to pull 42 bones out of the ground. 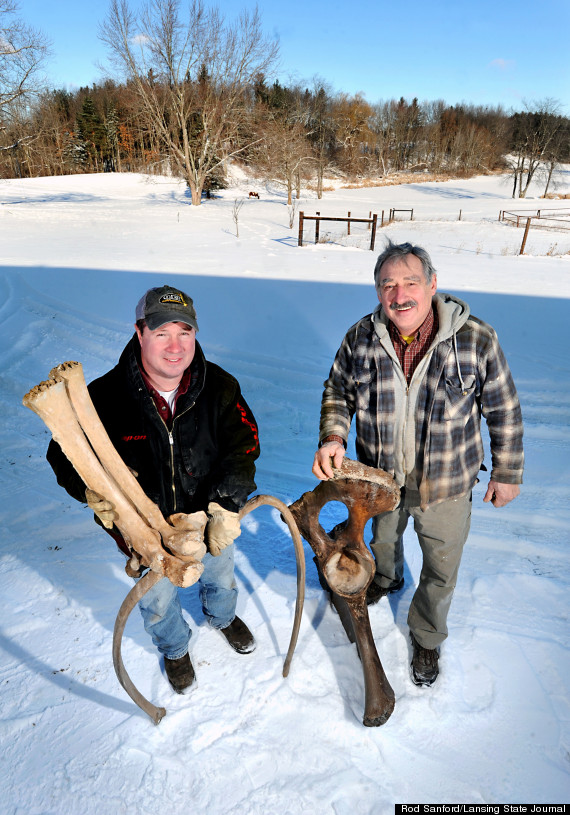 Daniel LaPoint Jr., left, and Eric Witzke show just a few of the many mastodon bones found on Witzke's property.

At first, they thought they had found a dinosaur. As it turned out, they had uncovered a mastodon -- a 5-ton animal that was the slightly smaller cousin of the woolly mammoth and distant relative of the modern elephant.

The two plan to keep a few of the bones, but donate the rest to the University of Michigan Museum of Paleontology.

An expert there has already examined the bones and believes they may be the remains of an ancient meal for early Americans.

"Preliminary examination indicates that the animal may have been butchered by humans," University of Michigan paleontologist Daniel Fisher told MLive.com. "The scientific value is really the new perspective, the new information, that specimens like these can bring."

That's right around the time of the area's first known human settlers, the Paleo-Indians who arrived some 12,000 years ago. 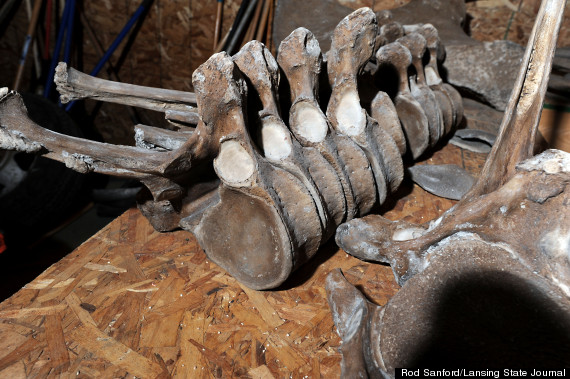 Some of the ancient mastodon bones found in Michigan.

While Fisher has examined the bones, they're not at his museum yet. LaPoint and Witzke first brought the bones to a local middle school for some show-tell-and-touch.

"Once these things go to the museum and get crated up, you're not going to get to touch them again. It's over with and I was that kid who wanted to touch that thing on the other side of the glass," LaPoint told the Journal. "All the kids got to pick them up and hold them. Some kids, it was life-changing for them. To change one kid's life because they got to touch it, I think, is an incredible opportunity."

Hundreds of mastodon bones and even some footprints have been found in Michigan. In 2002, the giant mastodon was named the official state fossil.