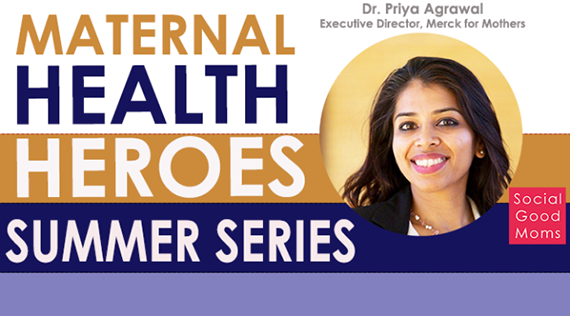 We are happy to publish our second interview in our Maternal Health Heroes Summer Series with Dr. Priya Agrawal, Executive Director of Merck for Mothers. Throughout the summer we will speak with some of the most notable maternal health advocates in the world ahead of the Global Maternal Newborn Health Conference that will be held in Mexico City between October 18 - 21, 2015.  Follow the conversation at #MHHSS.

Speaking with Dr. Priya Agrawal, Executive Director of Merck for Mothers, for this latest interview in our Maternal Health Heroes Summer Series, I instinctively realized that she is not only a gifted communicator with a passion for women's health, but also an infectious advocate for safe motherhood both in the United States and worldwide.

Merck for Mothers, a 10-year, $500 million initiative aimed at reducing maternal mortality, was launched in 2011 and initially set robust goals to reduce women's deaths during childbirth in low- and middle-income countries. Like many in America, Merck for Mothers failed to initially realize at the time that maternal mortality in the United States is a persistent problem that is steadily worsening. In fact, that line of thinking is quite understandable given most of the 800 women who die every day during childbirth live in sub-Saharan Africa and Southeast Asia.

To tackle maternal mortality head on in America, Merck for Mothers proved to be a vocal leader by insisting that all maternal deaths should be counted. "Somewhat shockingly we had to start with the basics," Agrawal continues. "The first thing we have to do is count maternal deaths. If we don't count the deaths we can't reduce the numbers."

In addition to counting maternal deaths, Merck for Mothers also approached review boards, hundreds of hospitals, and institutional governing bodies to create standard protocols for women who have obstetric emergencies during childbirth. There are standard protocols for heart attacks, for example, but obstetric emergencies have been a chronic afterthought. And, while there has been a general lack of maternal health awareness for the public, American health professionals have insisted on making impact to save more mothers' lives. Agrawal says there has been a huge hunger to do something about the number of maternal deaths in the United States and there has also been a real willingness to partner to make change, but there has been a general lack of investment and resources.

"When we came in we said we're happy to give you resources, but you have to work together," Agrawal says. Due to key partnerships there have been success points in the United States. Merck for Mothers has committed $12 million to maternal health efforts in the United States and now works in 19 states in nearly 300 hospitals reaching 1.2 million women with quality maternal health care.

Agrawal points out that it is the role of the community health workers and quality continuum of care that together will ensure more women enter pregnancy healthier to experience better delivery outcomes. Obesity, diabetes, and hypertension are three of the leading culprits resulting in sicker expectant mothers. "Women are entering pregnancy sicker," Agrawal continues. "Sixty percent of maternal deaths are happening postpartum. It is important to strengthen the postpartum piece."

Using data and internal Merck expertise, Agrawal says Merck for Mothers is investing in designing programs that have an impact not only in the United States, but around the world. She cites their programs in Uganda and Zambia that focus on private sector health providers and partners with NGOs like PSI experienced a 30 percent and 35 percent reduction respectively in maternal mortality ratios in their first year, feats unprecedented in sub-Saharan Africa. "These 'Yes We Can' moments have been huge," Agrawal recounts. Now, Nigerian health officials are looking to replicate the programs which is just fine with Merck for Mothers. Agrawal says that Merck for Mothers' strategy has always been to advocate for scale-up and to share models that work so other countries can invest in them.

"We are very data driven," Agrawal reiterates. "We always look at where we are going to save the most lives."

Find out more about Merck for Mothers at merckformothers.com.