Connections between math and science are easy to find. Those between art and science sometimes require a bit more work, but if you are in New York City over the holidays a trip downtown can do wonders for bridging the left-brain/right-brain divide.

A trip to the Whitney Museum of American Art will bring you to the Frank Stella retrospective. Among his many artistic innovations, Stella is known for his "irregular polygons" a collection of exuberantly colorful and jazzy paintings that foreground the artistic effects of geometry. The name of the series comes from the shapes of the canvases. These are not your usual rectangles, but instead are many-sided ("poly-" = many, "-gon" = side), with sides not generally all of the same length. For the mathematician that would be enough to make them "irregular", but these are really irregular in that unlike a standard painting, these canvases with their pointy protrusions don't even describe a "convex" regions (meaning that a line joining any two points on the edge of a canvas need necessarily stay within the canvas). The oddly shaped work makes you think about the shapes and when you do that -- not to mention when you read the word polygon -- you start thinking about math and maybe even start talking about it! That you then connect those thoughts with such energetic visual beauty, and the tradition of art history is also a "plus" (yes, that's a math pun...). 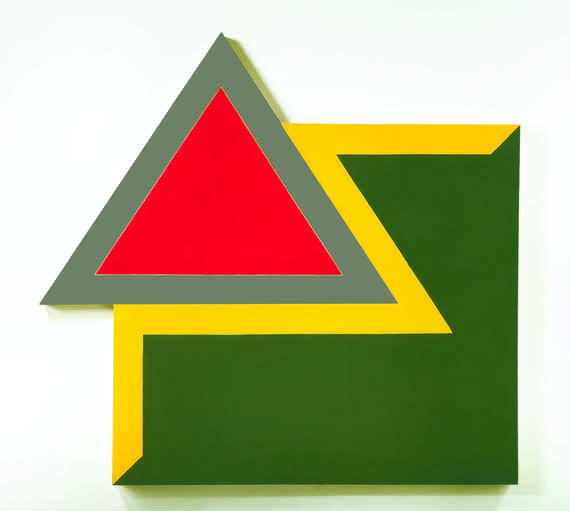 As long as you are already downtown, why not go north several blocks? If it's nice out, take the Highline. Just west of the corner of 27th and 10th, you will come to the Nancy Hoffman Gallery. Enter and in the middle room you will find a collection of aquatint prints of....mathematical expressions. The ten etchings comprise "Concinnitas", a print portfolio published by Parasol Press, LTD of Portland, Oregon and produced by the printers Harlan & Weaver, Inc. of New York City. The expressions were individually executed by famous mathematicians (including five Fields medalists), physicists (including two Nobel laureates) and a Turing Award computer scientist in response to the prompt to transcribe their "most beautiful mathematical expression". The contributors were also asked to write a brief statement to accompany the print. I curated the set. 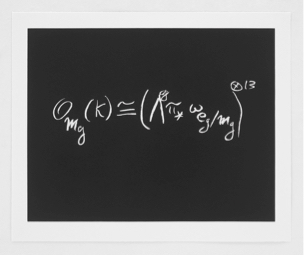 The expressions reference a wide range of mathematical topics: number theory, geometry, topology, combinatorics, analysis, mathematical physics, applied mathematics, computational complexity and mathematical physics. The breadth of subject matter is matched by a breadth of style in the ways in which the various contributors chose to execute their contributions. The accompanying statements reveal ways in which those who work deeply with mathematics see and feel its beauty, both in process and product. We read of simplicity, connection and surprise as well as stories of friendship and collaboration. Hanging together in one room in the gallery, they evoke a sense of elegance and mystery, precision and energy. For those who know a little art history there are obvious connections with conceptual art and minimalism. If this is meaningful to you, then you won't be surprised to learn that the portfolio's publisher Bob Feldman, was also the first print publisher of Sol LeWitt.

The Concinnitas exhibition is bracketed by a show of graphite drawings by Bill Richards and a show of wax encaustics by Richard Purdy. The former is teeming with the natural, wonderful organic jumbles of leaves and grasses that push out to the edges of their rectangular boundaries, rendered in ghostly but precise shades of grey. The latter series is directly inspired by the cellular automata work of mathematician/physicist/computer scientist Steven Wolfram presented in his monolithic "A New Kind of Science". Cellular automata are simple sets of rules sometime able to produce surprisingly complex patterns. Wolfram believed that cellular automata would provide a new language of science, one that would augment or possibly even replace mathematics as a means of describing natural phenomena. That said, they are best known as foundational algorithms for investigating "artificial life", wherein the basic properties of living things are abstracted create an in silico laboratory for understanding evolution.

Purdy creates his own cellular automata models, and from them grows grid-based patterns of color-coded squares, which he uses as the basis for his detailed and vibrant encaustics, thereby breathing real life into the artificial.

Mathematics has always existed in something of a liminal space between the arts and the sciences. It is on the one hand the language of much of science, enabling detailed descriptions and predictions of all kinds of natural phenomena, underlying the foundations of computational tools for investigating nature and in general providing a lingua franca for objective communication of testable hypotheses. It is however, on the other hand also a creative playground of ideas and imagination, even if constrained by logic, and a discipline in which abstract Platonic concepts can be arranged and re-arranged, modified and morphed. Mathematicians talk about the beauty of their work. Artists often reflect on the consistency of a piece or its ability to represent the essence of something -- the same kind of language a mathematician might use in creating a mathematical model or a mathematical definition. Mathematicians wrestle with infinity, artists with timelessness. Positioned as it is in the NHG show, between bookends mixing the left and right brain, one of nature explored in delicate but precise lines and shades of greys, and the other with its bright and bouncy color-filled reinterpretations of artificial life, the Concinnitas portfolio continues this integrative theme, giving us a new take on mathematics as art, as well as a new view of the art of mathematics.

In his statement, Concinnitas contributor and Fields Medalist Sir Michael Atiyah reminds us that the great mathematical physicist Hermann Weyl (famous for integrating notions of symmetry with quantum mechanics) once said, "My work has always tried to unite the true with the beautiful and when I had to choose one or the other I usually chose the beautiful." Of his own working process Frank Stella has said "If something is not beautiful, then I'm unhappy with it, and there are some things that are certainly not beautiful, but they get by. But you're still striving for the ones that really feel beautiful in the end." Every artist is a little bit of a mathematician and every mathematician is something of an artist. Come down to the west side of Manhattan and see it for yourself.