When is the last time you went to a party and somebody boasted of being inarticulate, illiterate, or socially stunted? You probably can't remember.

Yet, those of us who work with mathematics daily are all too familiar with the scenario of truthfully answering the query "What do you do?" -- in rooms across dimly lit bowls of the guacamole and brownies -- only to be gleefully told, "Mathematics was always my weakest subject."

Why is it still considered socially acceptable to brag about how lousy one is in the subject? What does it say about society's attitude towards science and technology, in a country which used to be at the forefront in that arena?

We now know that parents play a bigger role than schools in determining children's attitudes about learning, as Annie Paul Murphy convincingly sums up here. Do some parents in the U.S. limit the achievement of future generations in mathematics at all levels, by unwittingly communicating to their children their own discomfort with the subject, as well as an implicit message that it's okay to be weak in this area?

Few would disagree that the ability to communicate effectively in speech and in writing -- or deal with complex social structures -- is essential to successfully navigating our modern information-rich and increasing diverse world. Numeracy and quantitative literacy are less recognized as distinct bonuses for those wishing to be informed and healthy citizens, investors, voters, jury members and smart decision-makers in general. Everyone should learn the basics associated with those skills.

But there are other kinds of mathematics which are equally deserving of a place in the curriculum, regardless of the narrow perspective taken by some. Firstly, the importance of algebra continues to be misunderstood, as recent and not-so-recent articles make clear. It seems that more people need to read and understand the well-considered words of Keith Devlin.

Secondly, even the spirited defenders of algebra such as Daniel Willingham and Patrick Honner aren't stressing something that is easily overlooked: the elegance, beauty and simplicity which accompanies mathematical insight. It's not all about utility or abstraction.

Some of these less obvious aspects of mathematics can be glimpsed through creative, fun, exploratory, and sometimes open-ended activities, which teach participants of all ages how to problem solve or just brain-storm, far from the cut and dried world of plugging into formulas or calculators (and blindly trusting the answers obtained with no understanding of the relationship, if any, with reality).

Imagine if South Carolina had an annual Math Week outreach program, which this Oct. 13-21 engaged over 130,000 school children in every county in the state, with a mixture of grassroots activities for 8- to 18-year-olds during school hours, entertaining Math in the Street events for the whole family in major cities on the starting and finishing weekends, and high-profile public lectures in the evenings on diverse topics by overseas visitors of the caliber of John Barrow, Marcus du Sautoy or mathematical juggler Colin Wright. 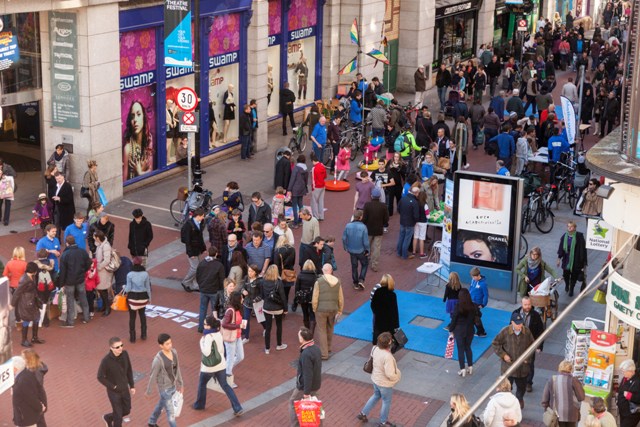 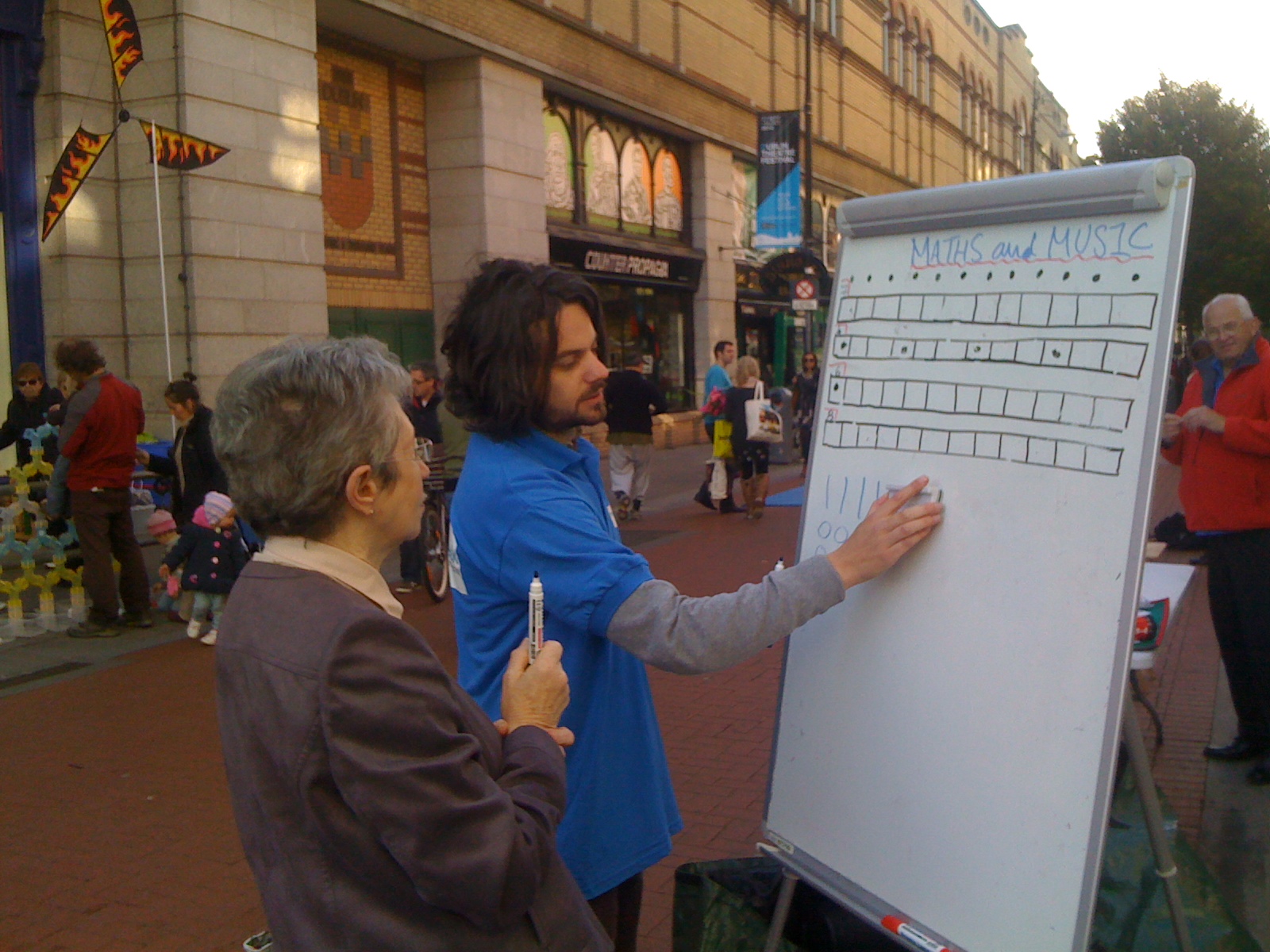 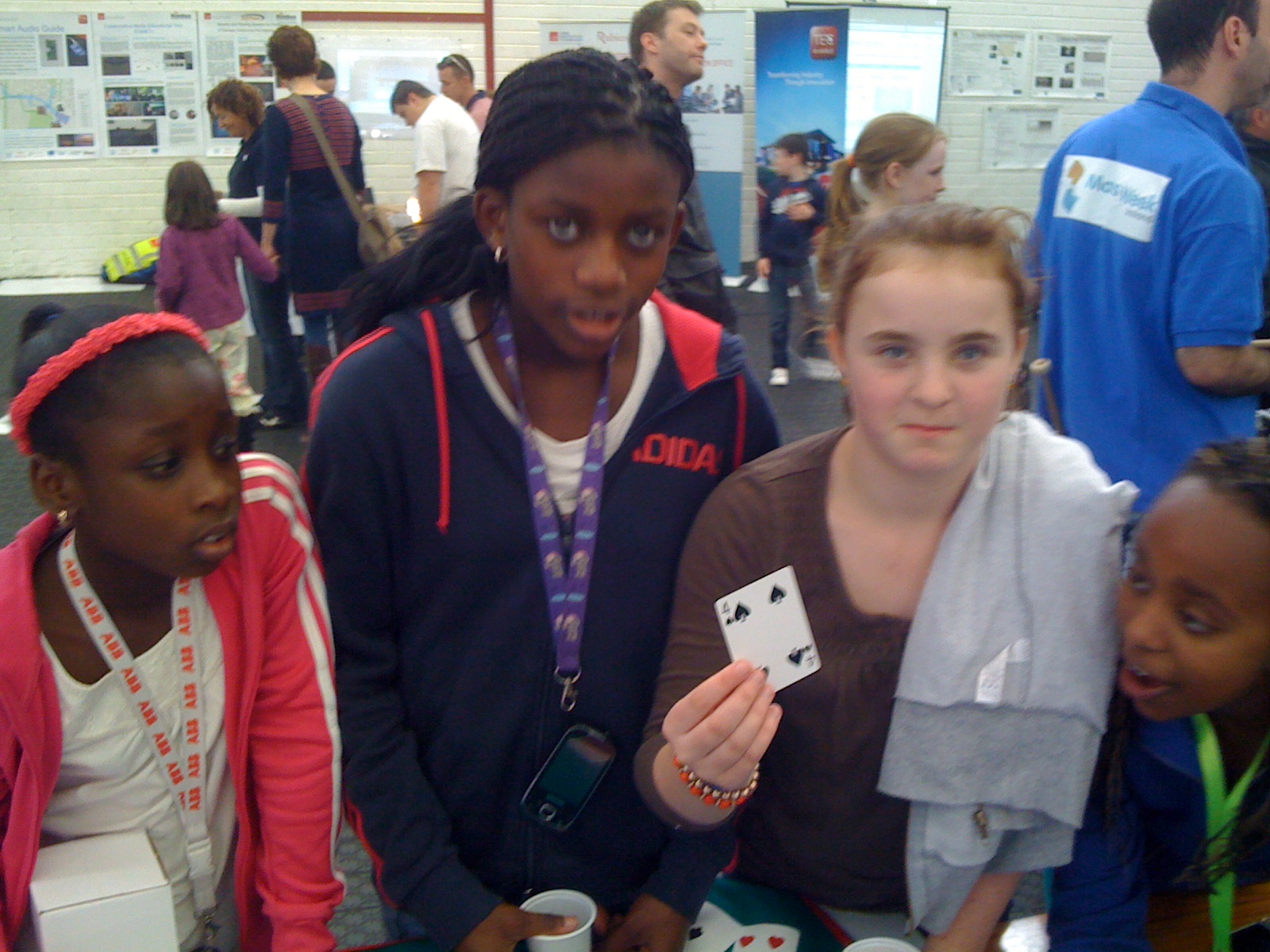 Such a program would be the envy of the nation, much talked about and admired, with other states queuing up to emulate it.

Alas, South Carolina doesn't yet have such an initiative, but the island of Ireland -- a territory 4,000 miles away with roughly the same area and population as that southern state -- most certainly does.

Maths Week Ireland just completed its seventh hugely successful year of events, and the above is a fair summary of what it has achieved since its 2006 inception. On the calendar, it's anchored around Oct 16, the anniversary of what is probably the greatest Irish contribution to mathematics, the 1843 discovery by William Rowan Hamilton that there is a place in algebra for the observation that putting your socks on after your shoes will leave a different impression from putting your shoes on after your socks.

Last week I traveled home to Dublin and had the pleasure of participating in this inspirational and visionary island-wide outreach for nine action-packed days, during which I drove 1,000 miles up and down the country and spoke to more than that many people. I joined a crack team of entertaining troupes who used music, magic, humor, rope tricks, cards, mazes and puzzles to draw in people aged 8 to 80 and convince them that there is a lot more to mathematics than quadratic equations and word problems.

Three things in particular struck me.

1. Media saturation: both before and after there is generous coverage in newspaper, radio and TV, both regionally and nationally.

2. The kids are alright: Halfway through my own street demonstrations of mathematical card magic, I'd stop and say, "It might not look like it, but this really is based on maths. Do you like maths?" Almost without exception, the boy or girl in front of me would say, "Yes, I love maths!" It's hard to imagine getting that reaction in the streets of Atlanta, Boston, Phoenix or Los Angeles. 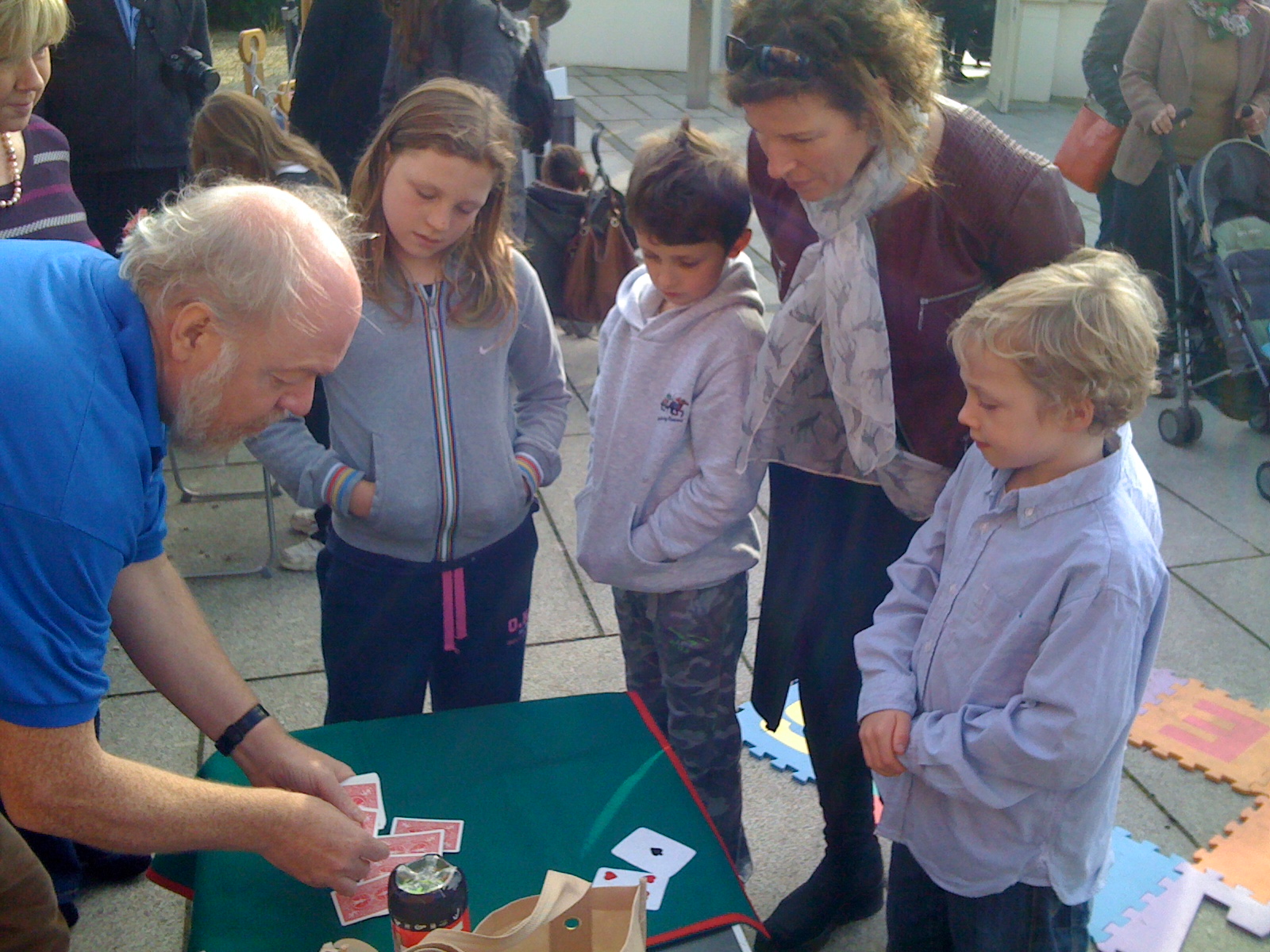 3. The parents are alright too: At the conclusion of each of my mathemagical entertainments, I would wait to see what curiosity was expressed, and in more than half the cases, the mother or father would say, quite insistently, "Now, tell us how that works." They then listened attentively while I explained and ran through it one more time. There was very little "I must confess this is above my head," and almost none of the "I was never any good at maths" cliche.

The last day's event was scheduled to last three hours, in Dublin's spectacular Botanic Gardens, and was a joint celebration of the legacy of Martin Gardner (Sunday would have been his 98th birthday). Hundreds of children who had come in Halloween costumes to view pumpkins were easily distracted by the mathematical offerings on display, and the crowds were still mobbing us after five hours. 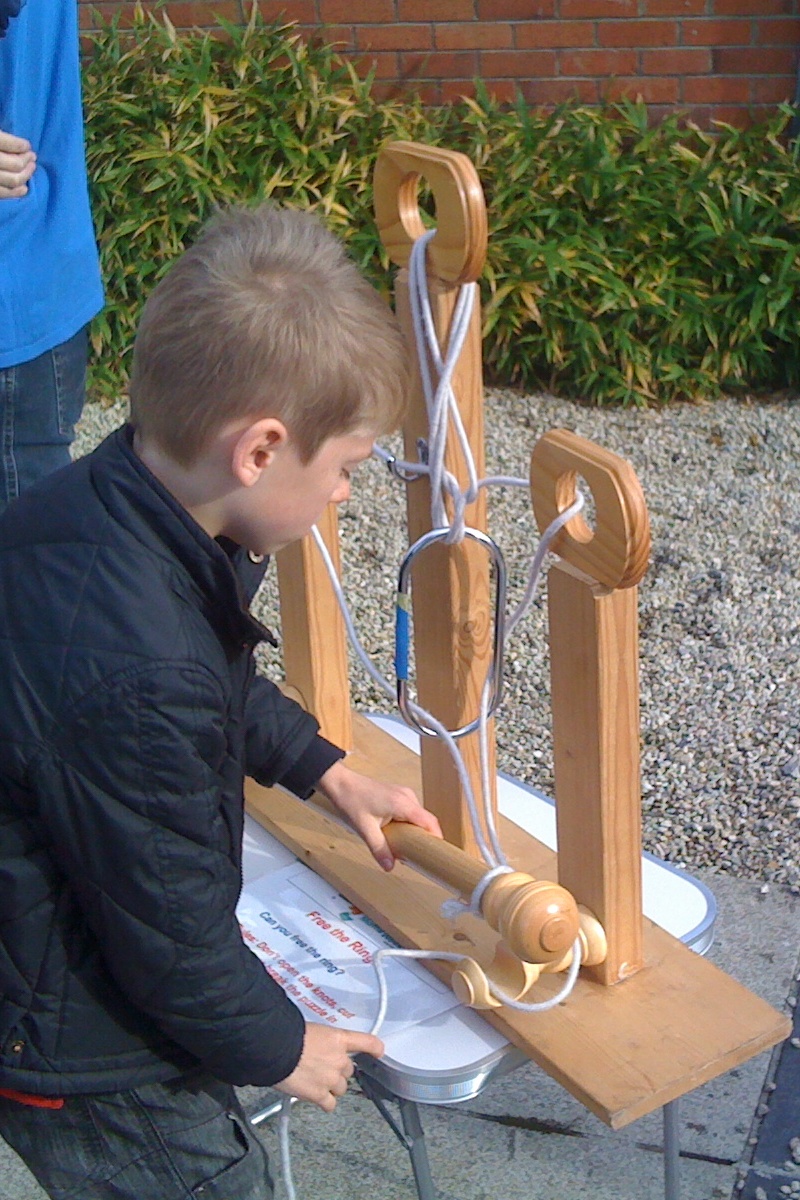 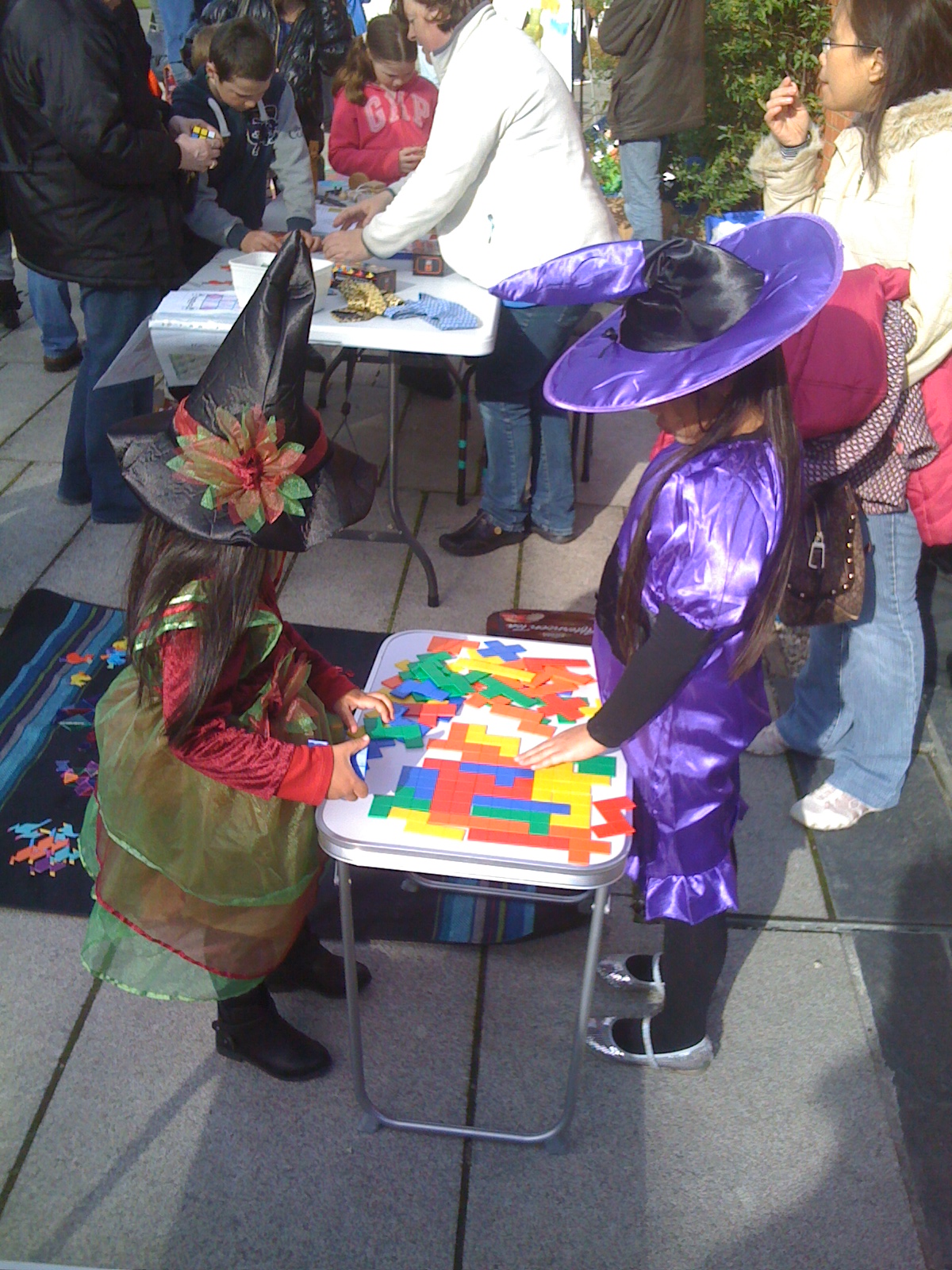 Each year, Maths Week Ireland sends posters to all 5,000 schools on the island, and has over 50 partner groups -- typically libraries and third-level institutions who host events in larger spaces for primary and secondary children gathered from up to 30 miles away.

"Funding is a mixture of public and private sources with public funding making up most of it. We are hopeful of building the private sector funding for next year. It's a national imperative and hence a public duty for higher education and related groups to promote maths, and while we cover the expense of visiting speakers, we expect the participating centers to pay expenses regarding venue, staff costs, advertising etc. It is a good example of effective symbiosis of resources."

With an upcoming election dominating the national scene in the U.S., it's hardly surprising that another month has gone by without any politician congratulating the nation's students on their insatiable appetite for -- or impressive achievements in -- mathematics. In Ireland, government ministers are always visible and vocal in their support of Maths Week, and a year ago many of the candidates for the country's 2011 presidential election participated in Maths in the Street in Dublin.

Meanwhile, stateside, President Obama announced a plan in June for the Creation of a National STEM Master Teacher Corps, which would include a significant shot in the arm for mathematics teaching. Merely throwing money at the problem won't fix it, as Robert Sun and others have pointed out. To make real progress, a more refined, intentional approach is required.

But perhaps the U.S. can learn from Maths Week Ireland, despite the different educational climates and societal attitudes in the two countries. It wouldn't be the first time Ireland exported an educational model: Plenty of Americans were educated by Irish priests and nuns in generations past, and in most cases it was a very positive experience.

The mild-mannered mathematical evangelists represented by the Maths Week Ireland are happy to spread their gospel anywhere there is interest. As Eoin Gill's co-organizer Sheila Donegan is quick to point out, the level of engagement is off the chart: "This year, there were 10 million questions answered by pupils in Ireland on Mangahigh Maths Week Ireland Challenge, from 1,200 schools, and also 62,000 questions answered by primary schools in Targetboard activity from 230 schools."

Clearly, somebody is doing something right.

The question is, can it be replicated in other places? It appears to be totally unique. As far as we can tell, so far there's nothing like it in Germany, India, China, Russia, Canada or anywhere else. Not even in Britain, from which several of the high-profile presenters hail.

Marcus de Sautoy, Simonyi Professor for the Public Understanding of Science at the University of Oxford, reveals:

"We are currently trying to start a maths week in the UK. Such weeks provide a great space in the academic year for teachers to step back and look at mathematics beyond the curriculum. It also provides mathematicians with an opportunity to connect with those outside their academic spheres. But the great thing is that maths week is also a chance for the public to start to find out about why mathematics is so exciting. In some sense mathematics is so important to modern life that every week is maths week."

Images from http://www.mathsweek.ie/2012/gallery (used with permission) and the author.