Matt Bollinger is a painter-collagist, and his current show at Zürcher Studio, Bed on the Floor, presents three distinct facets and directions in his work. The first is a continuation of his earlier figurative-tableau image making and occupies the main part of the gallery; the second is a mixed media installation, made in collaboration with Rachel Frank; and the third, representing a new idea for Bollinger, consists of larger than life images of flat surfaces, a sign, a wall, notebooks and sheets of paper, with writing collaged onto them. All three bodies of work exude the sadness of a world soaked in loneliness and destitution. 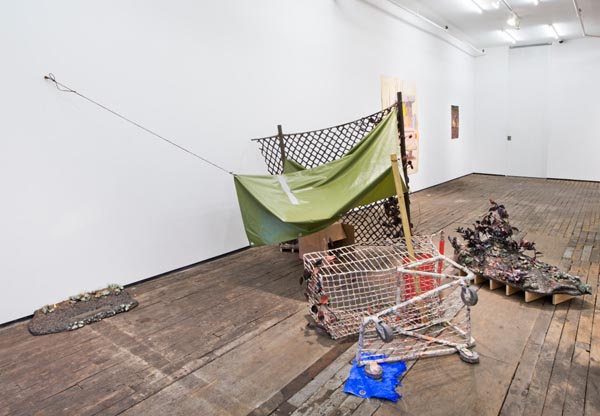 Although, to my eyes, the installation is the least successful of the three bodies of work, it does set the tone and context for the rest of the show. Depicting a makeshift homeless person's shelter, it is composed of overturned papier-mâché shopping cart and rubbish, clumps of sculpted earth and weeds and a green plastic tarp strung up to the gallery wall. The melancholic atmosphere of this presentation sets up the theme of despair and loss that carries through most of the rest of the show -- a slow moving katabasis; the dystopic descent of bottoming out, depression and loss of social standing. Robert Bly, in his book Iron John, calls this the "Road of Ashes." In mythology katabasis refers to the heroic descent into the Underworld. These images however are firmly placed within familiar this-worldy narratives and contexts of cheap beer, homelessness chain link fences and empty lots full of rubbish. 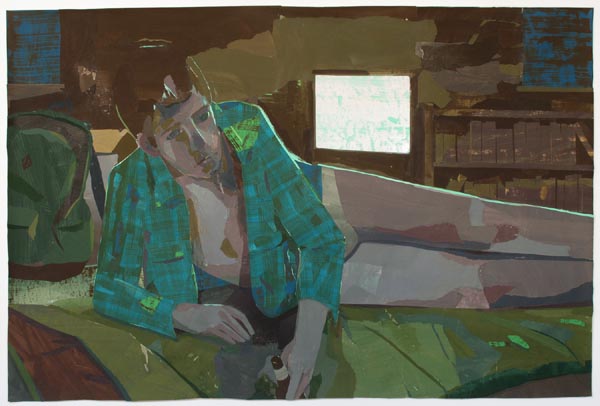 Bed on the Floor literally a suggests a lowering of position as well as a provisional and temporary arrangement, possibly a crash pad. In the piece of that title a youth dressed only in old-style white underwear and an unbuttoned flannel shirt stares vacuously morosely below the viewer, dangling a beer bottle off the edge of his mattress. He is backlit by a white and green static TV screen. The brown and green patches of torn paper that comprise the space around deftly become the torn and rotted walls of his world. The backpack placed beside the figure suggests that this figure is passing through, but on his way to where or what? In Guest, we find another passer-through; an over-skinny and droopy young woman sits up in her sleeping bag on a couch. On the glass table a can of beer and a black and white speckled essay notebook (a 'character' who will reappear in the third body of work). The color in Guest is all lurid orange and yellow-like, an overdose of low-wattage incandescent bulbs. The settings in this and other pieces are all sparse, simple stage sets like a modern day slacker noir film. 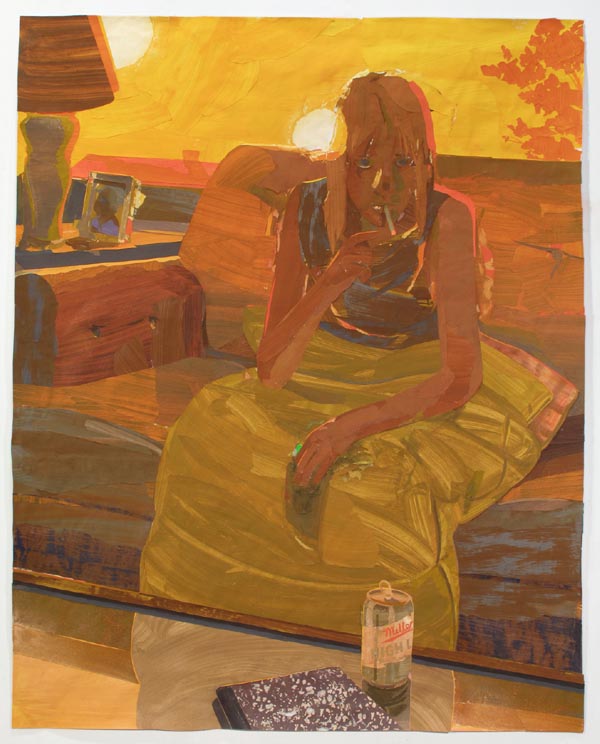 An Opening could be seen as relating to these two narratives; a man and woman, again travelers with backpack and bedroll, are each on one side of a gap in a chain-link fence, crawling through. The marvelously collaged fence provides a diagonal grid to offset the blocky stability of the two figures and a rectangular black backpack in the corner, (posed almost as if out of a Caravaggio painting such as The Entombment of Christ.) Like many of the pieces here the world is bathed in unnatural, and disquieting light. Here the eerie green and pink of a streetlight overrides the impotent romanticism of the full moon lit sky that pushes up against and almost out of the top of the picture. Is the image that of a fruitful escape into a promised land or are the two permanently locked in an indeterminate netherworld, an earthly limbo of aimless wandering? Does the separation by fence suggest a deeper disconnection? Are they jumping a train in the hobo tradition, running away, or college-kid backpackers on an adventure? Their mute expressions and generic surroundings allow for more questions than answers, but there is the mood and sense that they are only going further down and out. 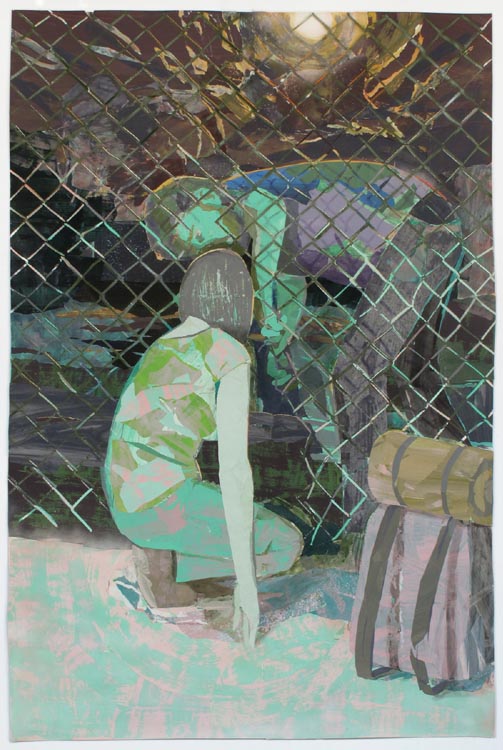 There are a number of implications in Bollinger forming these images out of pieces of painted cut and torn paper. One is that though they are collages, they are also paintings (in flashe and acrylic). The cut though allows for sharp edges of a kind not easily achievable with a brush's edge. Structurally too it allows the artist to put together simple, easily read images. By shifting the direction each patch of painted paper Bollinger creates a complex underlay of dynamic planar shifts. Further, there are many moments of stunning technical expertise that charge the collage medium to a new level -- especially given that the work also evokes the hyper inexpensive magazine tesserae of a high school art assignment. So whether from economic necessity or as an added to dimension to the overall mood of the work, or both, the relative cheapness of the medium strikes me as salient. 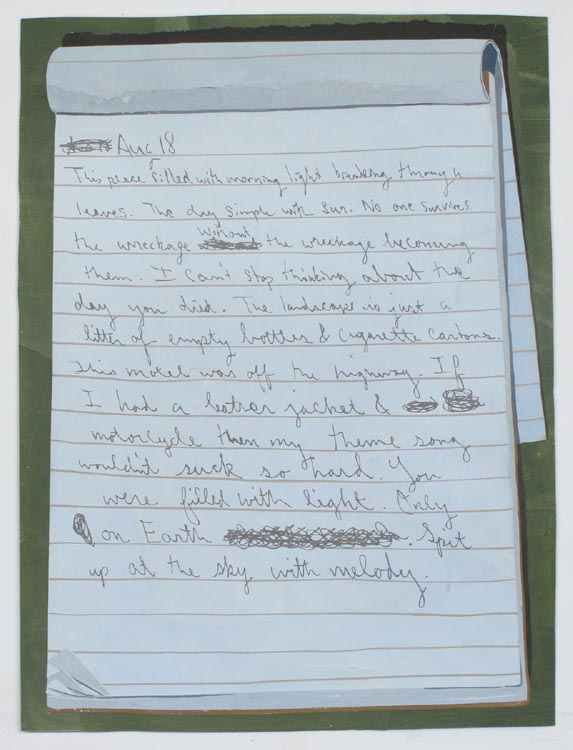 Which brings us to the third grouping of works. These images, mostly of words scrawled on torn, crumpled and beaten sheets of lined paper reminded me first of the thousands of sad and lost sheets of paper found in empty lots and garbage bins everywhere. There are several significant aspects of their contents however. One is that Bollinger has, with the poet Dan Magers invited four other poets, Paige Taggart, Farrah Field, Steven Karl and Alina Gregorian, to contribute a poem on the theme of a summer journey. Bollinger then hand wrote each poem using a distinct script, the reflection of an imagined poetic persona. These were next printed and cut using a sign-writing computer, before Bollinger glued each letter onto the likewise collage imagery of the lined paper. The narratives of each poem are congruent with the over-all romantic longing that pervades Bollinger's imagery:

...No one survives the wreckage without the wreckage becoming them. I can't stop thinking about the day you died. The landscape is just a litter of empty bottles & cigarette cartons. This hotel was off the highway. If I had a leather jacket then my theme song wouldn't suck so hard. You were filled with light. Only on Earth. Spit up at the sky with melody.

Perhaps, the bottom of the descent has not yet been reached. A faint hope persists. The beauty of katabasis however is that archetypally it is followed by an ascent. And that manifests here in the beauty, love and attention brought to bear on moments and conditions that otherwise we may prefer not to see.