Matt Damon, one of Barack Obama's earliest supporters and once one of his most staunch advocates, slammed the President in the new issue of Elle Magazine.

"I've talked to a lot of people who worked for Obama at the grassroots level. One of them said to me, 'Never again. I will never be fooled again by a politician,'" Damon tells the magazine. "You know, a one-term president with some balls who actually got stuff done would have been, in the long run of the country, much better."

Referring to the Occupy Wall Street movement, Damon continued: "If the Democrats think that they didn't have a mandate -- people are literally without any focus or leadership, just wandering out into the streets to yell right now because they are so pissed off ... Imagine if they had a leader."

The slam follows in the same vein as a number of other criticisms Damon has made of the President and the Democrats, including in March, when he criticized Obama's education policy.

"I really think he misinterpreted his mandate. A friend of mine said to me the other day, I thought it was a great line, 'I no longer hope for audacity,'" Damon told CNN host Piers Morgan. "He's doubled down on a lot of things, going back to education... the idea that we're testing kids and we're tying teachers salaries to how kids are performing on tests, that kind of mechanized thinking has nothing to do with higher order. We're training them, not teaching them."

Later that month, he hit Obama on his handling of the economic crisis.

"I think he's rolled over to Wall Street completely. The economy has huge problems. We still have all these banks that are too big to fail. They're bigger and making more money than ever. Unemployment at 10 percent? It's terrible," he told the Independent. Damon also criticized the President's inability to get transformative things done, saying, "They had a chance that they don't have any more to stand up for things. They've probably squandered that at this point. They'll probably just make whatever deals they can to try to get elected again."

Currently, Obama and the Democrats are fighting with the House GOP over passing a compromise two month extension of the payroll tax cuts and unemployment benefits, amongst other things; they've already removed increased taxes on the wealthy from the deal.

Damon's criticism rings with disappointment after he so publicly lent his support to the then-Senator Obama during the 2008 election. He spent time campaigning for the then-candidate at rallies, promoting him through a MoveOn video contest and attending fundraisers for the man who would become the 44th President.

In August, the star ripped a cameraman and reporter from a conservative publication who challenged his stance on education at a Save Our Schools event in Washington, DC. He then moved on to economic policy criticism.

"The wealthy are paying less than they paid at any time else, certainly in my lifetime, and probably in the last century," Damon told a reporter at the same event. "I don't know what we were paying in the Roaring '20s; it's criminal that so little is asked of people who are getting so much. I don't mind paying more. I really don't mind paying more taxes. I'd rather pay for taxes than cut 'Reading is Fundamental' or Head Start or some of these programs that are really helping kids. This is the greatest country in the world; is it really that much worse if you pay 6% more in taxes? Give me a break. Look at what you get for it: you get to be American."

Speaking of the then-protracted negotiations over the debt ceiling, he did show some sympathy for Obama.

"I'm so disgusted," he said. "I mean, no, I don't know what you do in the face of that kind of intransigence. So, my heart does go out to the President. He is dealing with a lot."

Scarlett Johansson, Damon's co-star in the upcoming film "We Bought A Zoo," recently said that she wanted Obama elected to another four year term. The President still enjoys support in Hollywood, having recently attended fundraisers in Los Angeles filled with stars.

Obama responded jokingly to Damon's criticism at his White House Press Correspondents Dinner in late April, saying, "It's fair to say that when it comes to my presidency, the honeymoon is over ... Matt Damon said he [has been] disappointed in my performance. Well Matt, I just saw the 'Adjustment Bureau,' so ... right back atcha buddy."

Matt Damon Slams Obama, Democrats: 'One Term President With Some Balls Would Have Been Better' 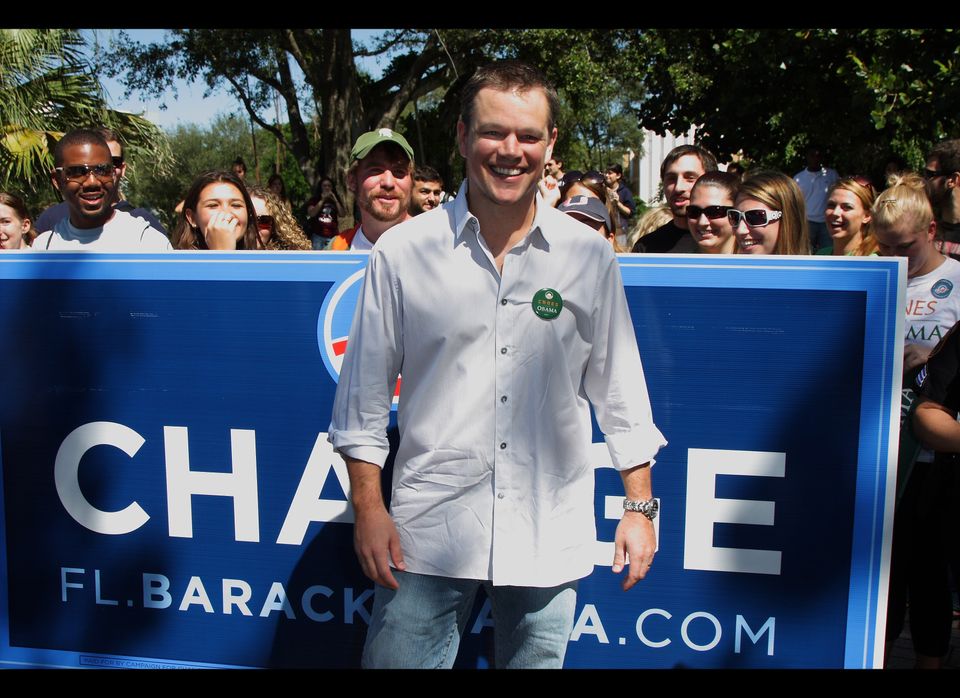