Matt Drudge, the conservative blogger behind The Drudge Report, has bought another home in Miami, as first reported by Gossip Extra, and now owns over eight acres of South Florida.

The so-called conservative bullhorn paid $700,00 cash for his latest acquisition, a four-acre compound with a five-bedroom, five-bath ranch onsite.

It neighbors another of his homes, a 6,500-square-foot house also on four acres, which the "right-wing noise machine" reportedly bought for $1.45 million cash in 2011.

According to a YouTube video that tours Drudge's 2011 home, the property is cloaked in a tropical hammock of palm trees and ferns. It features security cams, alarms, and a gated entrance. And it has luxurious amenities like an entrainment gazebo with bar, a steam room, a subzero fridge, and a waterfall in the master bath.

Both four-acre estates are in rural Redlands in Southwest Miami-Dade County, an area full of citrus orchards and berry fields.

Will Drudge combine the two properties and build a right-wing mega-compound shielded by orange trees?

Drudge still owns a 7,500-square-foot Miami Beach property off the Venetian Causeway, which he bought for $1.4 million in 2003.

Prior to that, in 2002, Drudge bought a condo at La Gorce Place Condominiums on North Bay Road, where he also requested a parking space for his corvette, according to forms in public records.

Corvettes? Jacuzzis? Waterfalls? This news blogger has some champagne tastes.

Click below for images of Drudge's most recent purchase, courtesy or Realtor.com, and a video of his other Redlands estate: 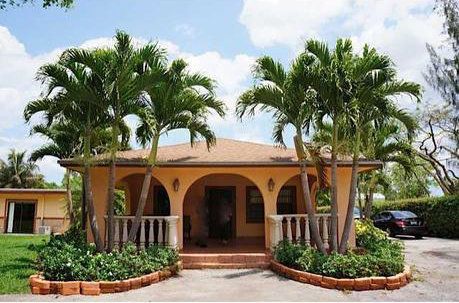