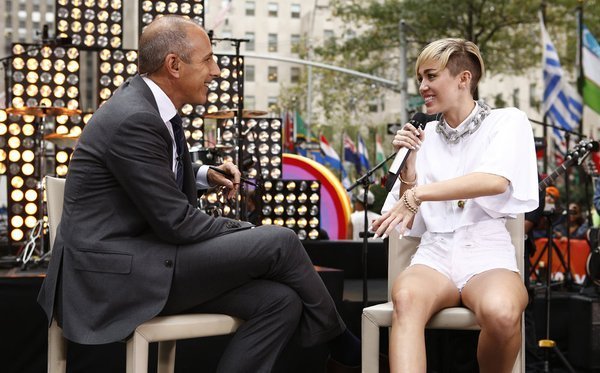 This week on The Today Show, Matt Lauer asked Miley Cyrus whether the latest dances, photo shots and songs she's been presenting is a new "sexual side" of hers that will be here for a while then move on to something else? This question may not have been worded properly because through the question he asked is the implication that sexuality is "just a phase" that one goes through for while in one's 20s and then eventually calms down. Implicit in the term "just" is a parental top/down dynamic that misses the understanding that people are sexual from the day they're born in that they're curious about their bodies and how they work.

Matt sounded like a father who considers the clothes, dances and attitude of his daughter too blatantly sexual. What his interview missed and dismissed by using the expression "a phase" is that Miley has been sexually growing and changing since she was born and this is the latest expression of an organic process. The fact that she has been expressing in a blatant public manner has more to do with the fact that she's now an adult performer who knows that sex sells and she is in the business of selling albums.

Inherent in Matt's questions is the same error that was in Miley's sassy answer namely; that sexuality is only a phase in one's younger years and eventually one "grows up" and out of expressing one's sexuality. While most of the press is focusing on Miley's answer (which I believe perhaps was staged for shock value like her terribly performed dance at the VMAs), they should be discussing the fact that sexuality is a lifelong aspect of a person's life throughout all the developmental phases, including age 40 and way beyond. I had a client once tell me that her husband was sick and dying of cancer and the day before he died he summoned the strength to make love to her one last time.

The problem that Miley was comically commenting on through her "over age 40" comment is that people forget how to inject novelty, playfulness, and eroticism in long-term sexual relationships causing sexual interactions between long-term married couples to decrease in frequency. It also sometimes lead to married couples to feel like their sex life is dead which can lead to divorce. As a Certified Sex Therapist who treats and as a writer who blogs about loss of desire in long-term couples I have worked for many years to improve the conversation couples have to make an inroad to transforming their sex life. However there are many couples out there not needing my help and doing just fine Miley.

What I think this Today Show exchange offers us though is the opportunity to talk about the lack of education for young people, as well as for adults around the potential for sexuality to continue pleasurably across the lifespan. Can we have that discussion now?