If there's been one positive result of the largest U.S. bank grappling with $6.2 billion in trading losses, perhaps it's everyone else learning how little we truly know about these massive institutions.

Some suggest that the report, which found that JPMorgan executives consistently disregarded or covered up red flags, shows that big banks have become too big to manage.

"They showed everybody that there are zero internal controls at these companies and that we have absolutely no idea what's going on, and that just exposed everybody to the danger that we're in," Taibbi said.

There appears to be growing support for ending the government backstop for big banks. Roughly half of Americans support breaking up the big banks, according to a recent Rasmussen poll. And just last Friday, the Senate voted unanimously to end the subsidies for too-big-to-fail banks in a symbolic vote.

"Everybody's worried," Taibbi said. "It just has to do with a general fear these guys learned nothing after 2008, they're continuing to support themselves with massive amounts of free government money."

Bloomberg View recently alleged that big banks get a subsidy of $83 billion per year, since investors and clients assume that the government will bail out the big banks if they get into trouble. For their part, five financial industry trade groups disputed the calculation.

Matt Taibbi: JPMorgan Hearings Showed That 'We Have Absolutely No Idea What's Going On' At Banks
Matt Taibbi&#039;s Best Takedowns 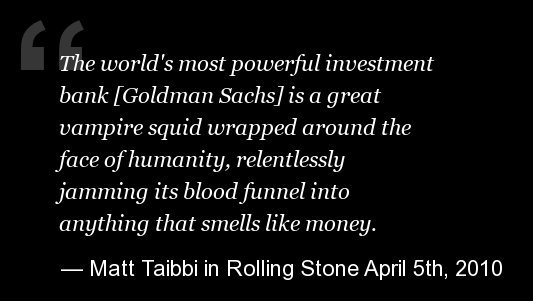