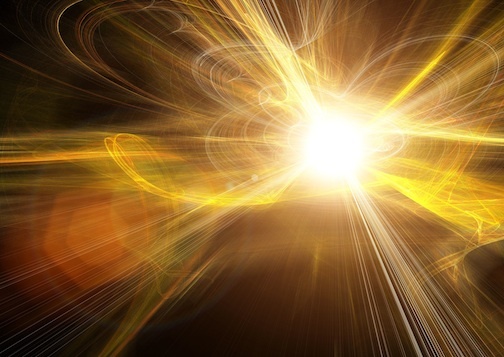 The heavens declare the glory of God; the skies proclaim the work of his hands.
--Psalms 19:1, NIV.

Most religions of the world have started with at least one powerful metaphor. Christianity is no exception. And while "simple" may not be the exact way to describe it, the first and chief metaphor in Christianity is darkness and light (the supremacy of the one over the other). According to the Genesis account, God spoke and there was light (1:3). He then separated the light from the darkness (1:4). This is the very foundation of scripture, the floor it stands on.

But this is not a lesson in metaphor or figurative language. Nor do I intend to press an agenda for which I am ill prepared to argue. This is merely an observation.

I recently watched a documentary called How the Universe Works. This particular episode (#3) was called The Big Bang. I do not pretend to have the tools to explain the Big Bang with convincing detail, nor am I provoking an argument one way or another as to its validity. To do so would be wide of the point. But as I understand the theory, almost fourteen billion years ago, at the ignition of the Big Bang, energy was transformed into matter. All the materials of the universe, all that we see today, were created in that single detonation.

Created with matter was antimatter. Simply put, if matter has "one charge (+), antimatter has the opposite charge (-)." You might think of antimatter as the evil twin of matter. They are mirror images one to the other and yet the one negates, or cancels out the other. "The fate of the universe hangs in the balance of this ancient battle," the narrator says in the historical present tense.

But given equal amounts of matter and antimatter there should be no universe at all. Again, the one would cancel out the other. However, and this remains unexplained, in the matter/antimatter faceoff there was slightly more matter than antimatter. "For every billion particles of antimatter," one commentator said, "there were a billion and one particles of matter. The universe as we know it is composed of the "leftovers."

Matter, therefore, won out over antimatter. And with an abundance that filled the universe as we know it. "Matter has won the battle with antimatter," the narrator says.

What this suggested to me was that the chief metaphor of Christianity, the promise that drives it and gives it life, that is, the ascendency of light over darkness, was written into the very fabric of the universe itself and from its nativity. It becomes a factor, a part of the template that shapes not only the universe, but all the particulars of it, including man. And while this doesn't necessarily explain the presence of evil in the world, why there was a serpent in Eden, or why a Judas was necessary, it makes a powerful argument -- that creation, in a sense, had to struggle against itself, that this struggle was and is somehow necessary, and that the outcome was and remains inevitable. It mimics the Christian life.

In this world you will have trouble. But take heart! I have overcome the world." (John 16:33, NIV)

When the final bell tolls, when all the smoke clears, and all our opinions are shown for what they are, good and bad, when all our toys are put away at last, light will triumph over darkness. This is a promise, the gospel written in the stars.